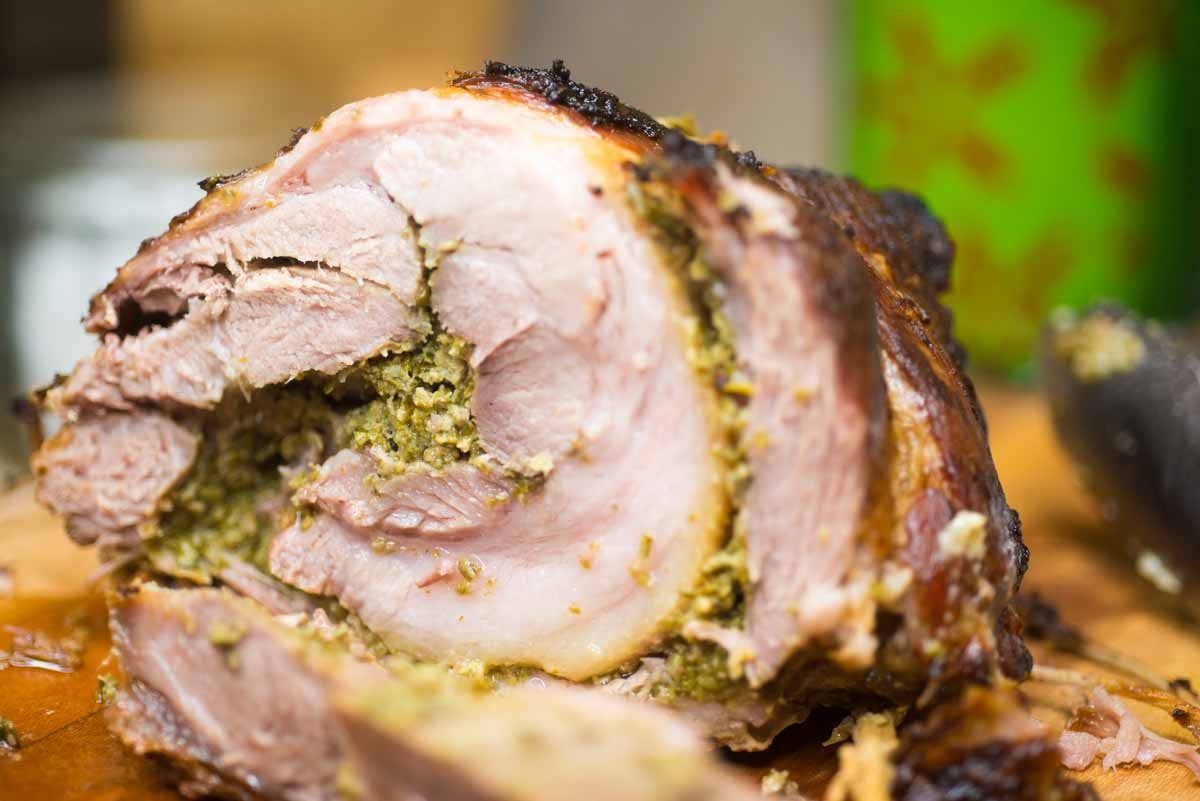 Remember the dinner party that started with the Oysters Casino? Well, this is the post for the main event. Lemon-Herb Stuffed Pork Roast served with Twice Baked Potatoes with Bleu Cheese and Rosemary and Zucchini Ribbons in Butter and Fresh Parsley. I was so happy with how this dinner turned out. It is a definite do-over.

Prepare and butterfly the roast to about an inch to an inch and a half thick. 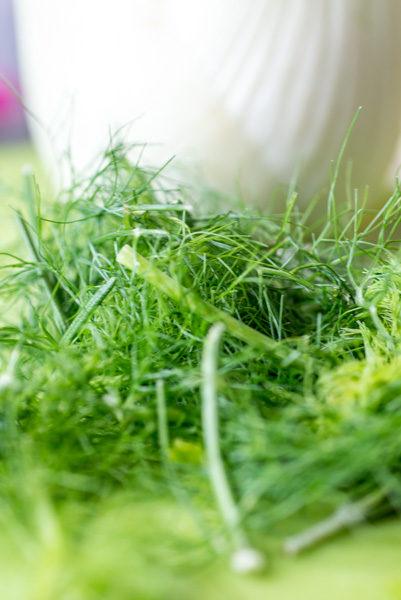 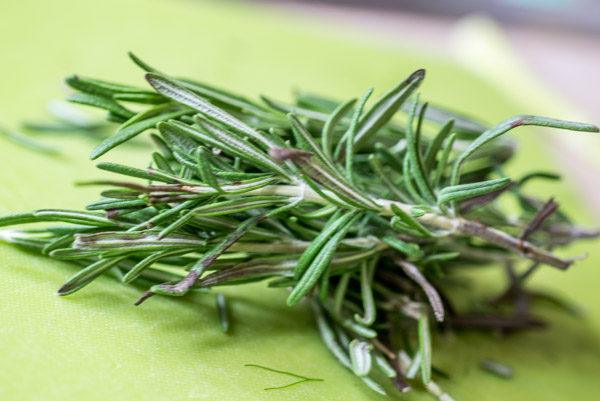 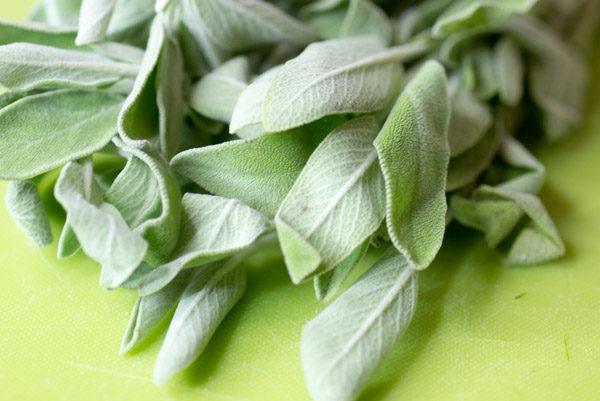 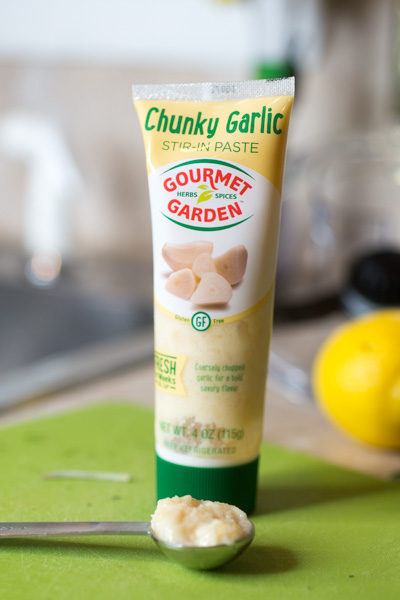 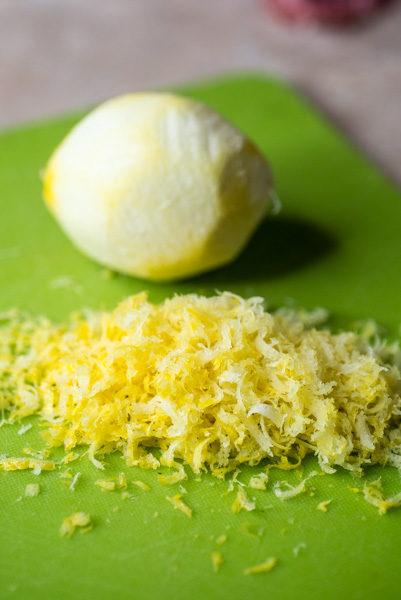 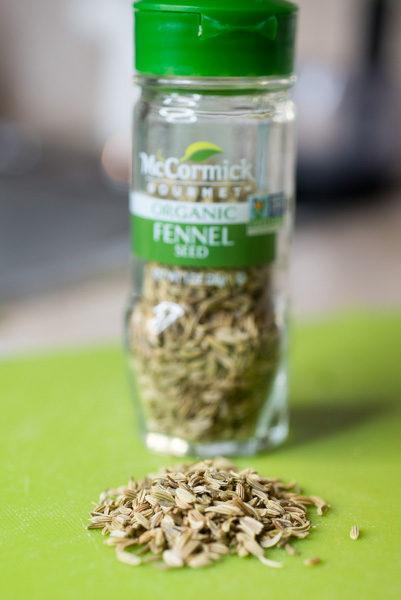 Pour in oil. Pulse until it forms a paste. Rub all over pork. Roll the pork into a roast form and tie with kitchen string at 2-inch intervals. Transfer to a large bowl and cover with plastic wrap. Refrigerate at least 3 hours (or up to overnight. 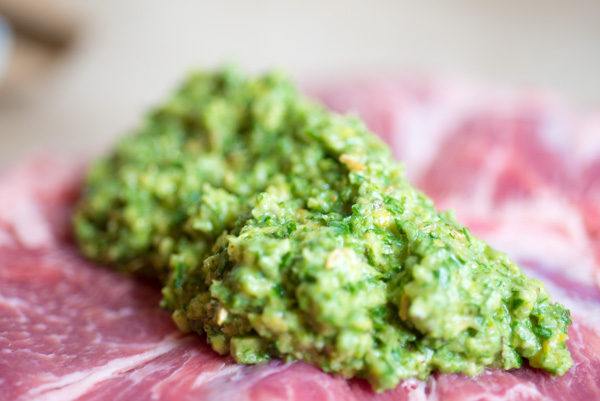 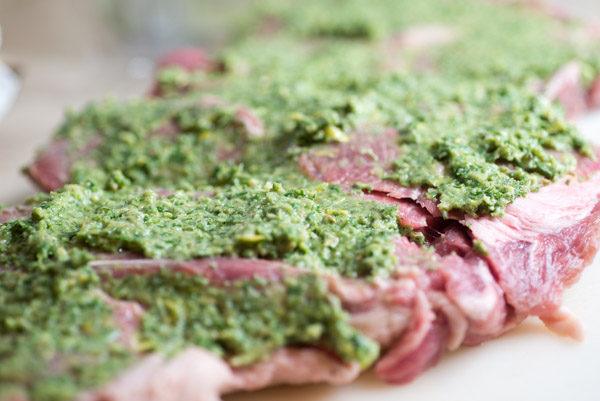 Remove pork from refrigerator an hour before you want to cook it. Slice the lemon used to create the zest into at least 12 thin slices. Using toothpicks to hold, cover the roast with the slices. Drizzle a thin stream with olive oil over the lemon-covered roast. 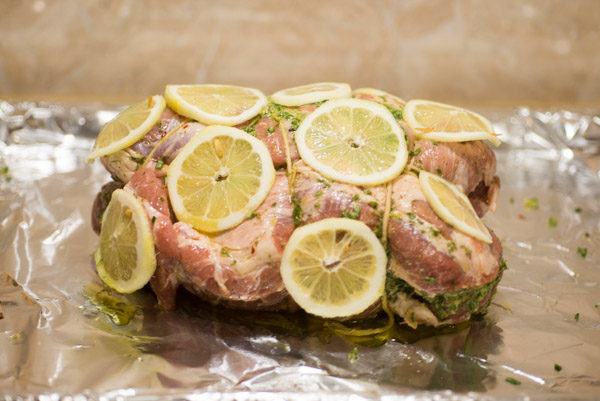 Heat oven to 450 degrees. Transfer pork to a rimmed baking sheet and roast 30 minutes. Reduce temperature to 325 degrees and cook an additional 3 to 4 hours, until a thermometer inserted into the thickest part of the meat reads 160 degrees, which will give you a sliceable, tender roast.

NOTE: The lemon slices will char. I removed them at that point and continued cooking until the temperature above. 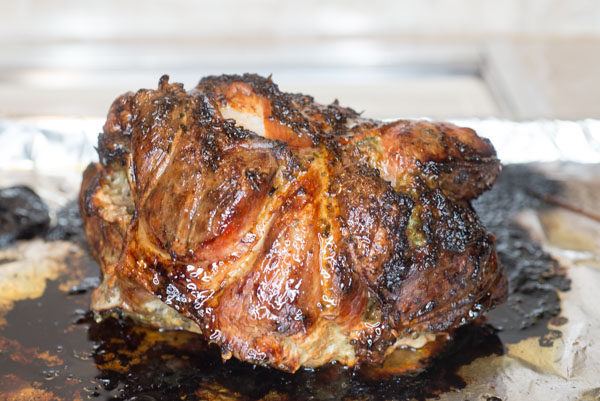 Transfer pork to a cutting board and let rest 15 to 30 minutes before serving. 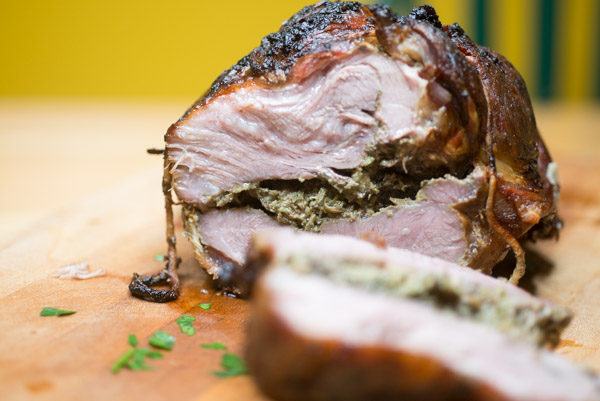 And now the a-maz-zing potatoes.

As you whip up the potato mixture for this dish, I like the texture to be like a mousse.  Light in the mouth but packed with flavor.

Preheat oven to 400°F. Pierce potatoes with a fork. Place on oven rack; bake until cooked through, about 1 hour. Transfer to baking sheet; allow to cool 15 minutes. 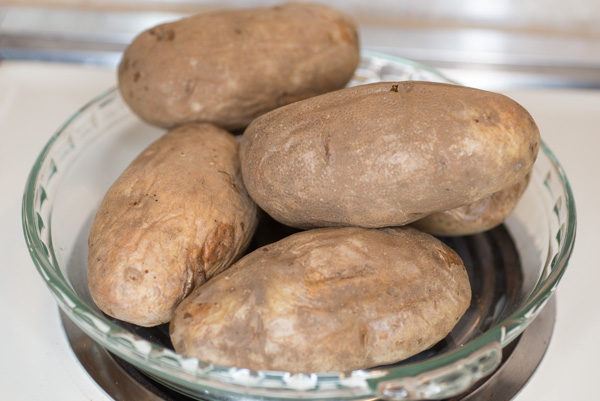 Add 1/3 cup Greek yogurt, crumbled bleu cheese, butter, garlic and rosemary to potato flesh. Using a mixer or immersion blender; whip the potato mixture into a mousse. Season with salt and pepper and blend. Scoop the mousse into each potato shell dividing it equally. Place one thin slice of the bleu cheese on top of each potato.

Can be made ahead of time (up to 24 hours). Refrigerate until 30 minutes before baking.

Preheat oven to 400°F. Bake potatoes on baking sheet until heated through with a golden brown crust of cheese on top; about 30 minutes. I use a food thermometer to make sure the center is at least 150 degrees. 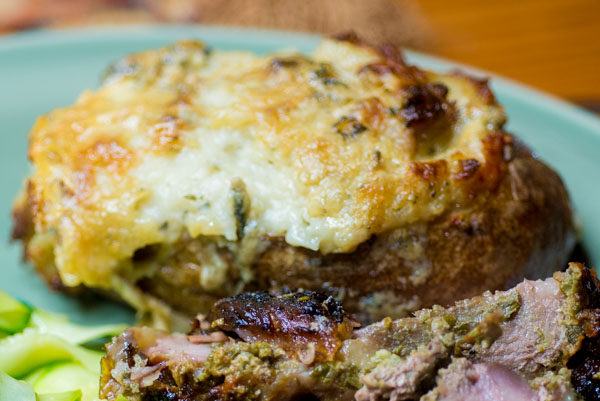 About the Bleu: Use a softer and creamier (higher moisture content) cheese versus one that is harder and more brittle.

** Warm your cheese knife under hot water and just six thin slices of cheese to place on top of the mouse. Crumble the remaining.

What wine did I pair with this meal? 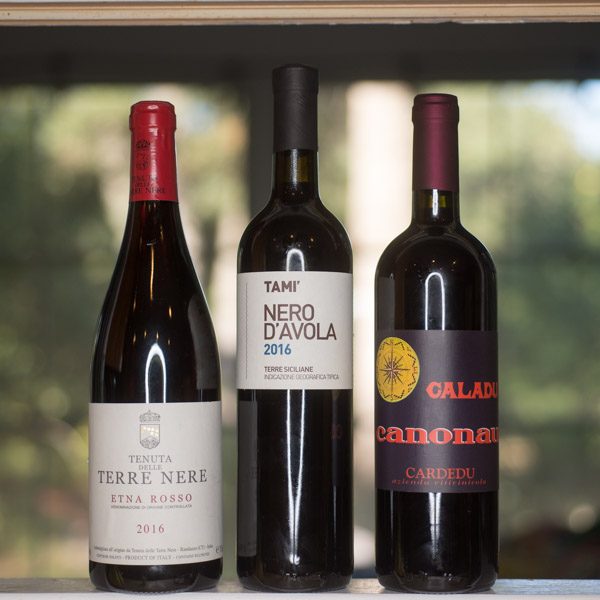 Since my seasonings in each course had spices frequently used in Italian cooking, I decided to go with Italian wines. Truth be told, I am not well versed in the wines of Italy. But I wanted to drink wine that I knew I liked and had purchased versus getting something new. These three wine I had tasted previously during one of my classes or at a tasting. Not to mention they were the only Italian wines I had in my house.

These are not wines that one might recognize but are worth seeking out. They are not from mainland Italy but the islands of Sardina and Sicily. Fortunately for me, they worked beautifully and were a big hit. We started with the Tenuta Delle Terre Nere Etna Rosso 2016 to pair with the cheese and charcuterie platter starter. From there we moved to the Cardedu ‘Caladu’ Cannonau di Sardegna 2013 with the Oysters first course followed by the 2016 TAMÍ Nero D’Avola Terre Siciliane with our main course.

This wine is my first from Sicily, and it is right up my alley. It is fresh and clean with flavors of cherry and cooked plums and just a hint of smokiness. I found it lighter in body than I expected. The balance of fruit, acid and tannic structure made it a great first bottle. The fruit for this wine comes from the upper slopes on Mt Etna (1300 to 3300 feet above sea level). The grapes (Nerello Mascalese (95%) and Nerello Cappuccio (5%) are more than likely not familiar to most as they are indigenous to the island. ($21.00) 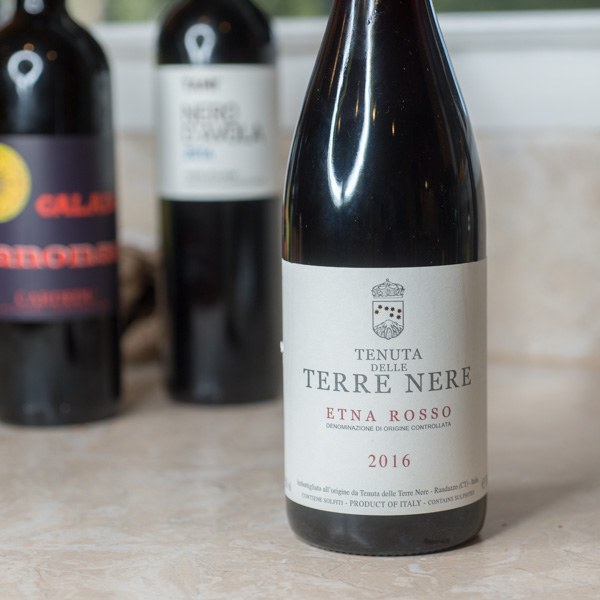 Cannonau is the grape, and while you have probably never heard it called this, you will recognize it in the glass. This grape is the Sardinian version of the Spanish Garnacha (Grenache).

While the winemaker recommends pairing this wine with grilled meats, I feel like it worked well with the Oysters Casino. It was a bit richer than the Rosso served before it, but it’s still a lean wine.  Not much definable fruit in this wine but more spice and smoke. I loved it. ($20.00)

I bought both of the above wines at goat.sheep.cow.north. 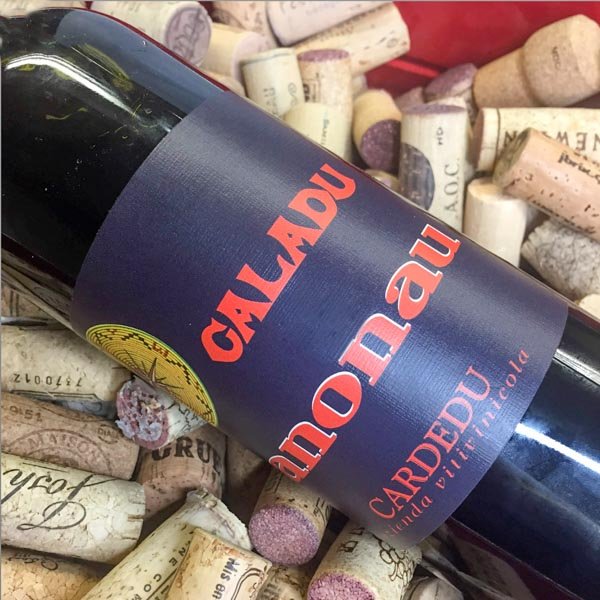 This was the “biggest” wine of the night but still a medium-bodied wine. The aromas of red fruit followed cherry, pomegranate and eucalyptus notes on the palate with an earthy finish. The intense herbs in the pork roast made this the perfect wine for this meal.

I bought this wine at Monarch Wine Merchants, but last time I checked, it was no longer available. 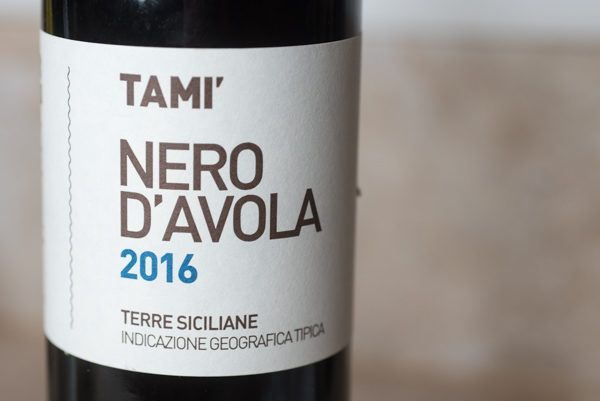 Since I made dinner for six but we were only three we ate way too much. The salad course and the desserts were skipped as we all rubbed our bellies and just sat there. But that was no way to end a meal, so I snuck back into the studio/wine room/laundry room and grabbed this little gem. 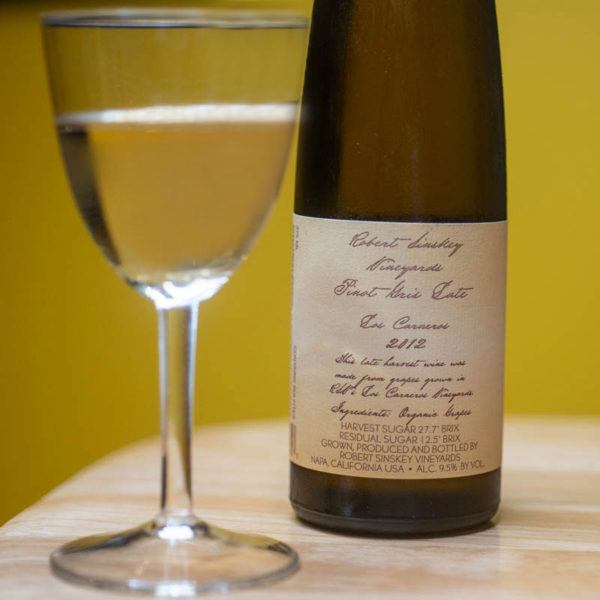 The tasting at Robert Sinsky Vineyards in November of 2017 remains one of my favorite wine experiences. Perhaps it is because it was on my first trip to the region, but it is also because of the stellar wines made at Sinsky. This was a month after the Napa fires of that year and folks in the business were just thrilled to be working after the devastation. And at Robert Sinskey the wildfires came right to their back door. I can not remember if I got to taste this dessert wine last November or not. However, I did buy close to a case of wine that day, and one of the bottles was the Robert Sinsky Vineyards Pinot Gris Late Los Carneros 2012.

Since dinner ended without the sweet dessert tarts I bought, I felt that I still needed a sweet ending. Most dessert wines are only 375 ml (a half bottle), so one bottle does not go very far. So a dinner party for three seemed like the perfect time to pull this from the cooler. 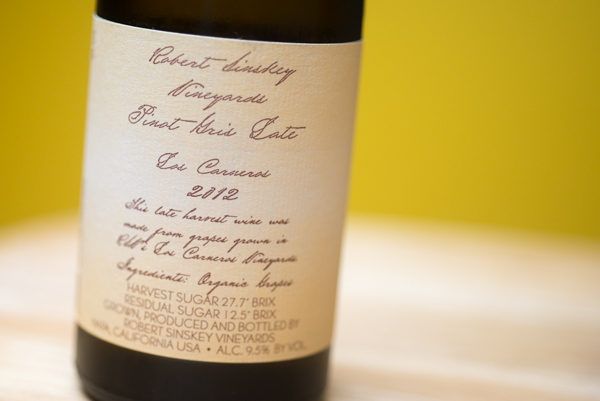 Many dessert wines are thick and syrupy. The color is usually darker than normal. And of course, they are sweet perhaps cloyingly so, which makes it a dessert. But this wine is more off-dry than sweet, and the other typical dessert wine characteristics are not to be found. It has a clear, light straw color. And it is a poured like a regular bottle of wine. It shares aromas and flavors of crystallized ginger, citrus, and ripe pear, followed by a nutty note of almond.

This wine is not just for dessert but can be served with the cheese course as well. For us, this wine was the perfect ending.