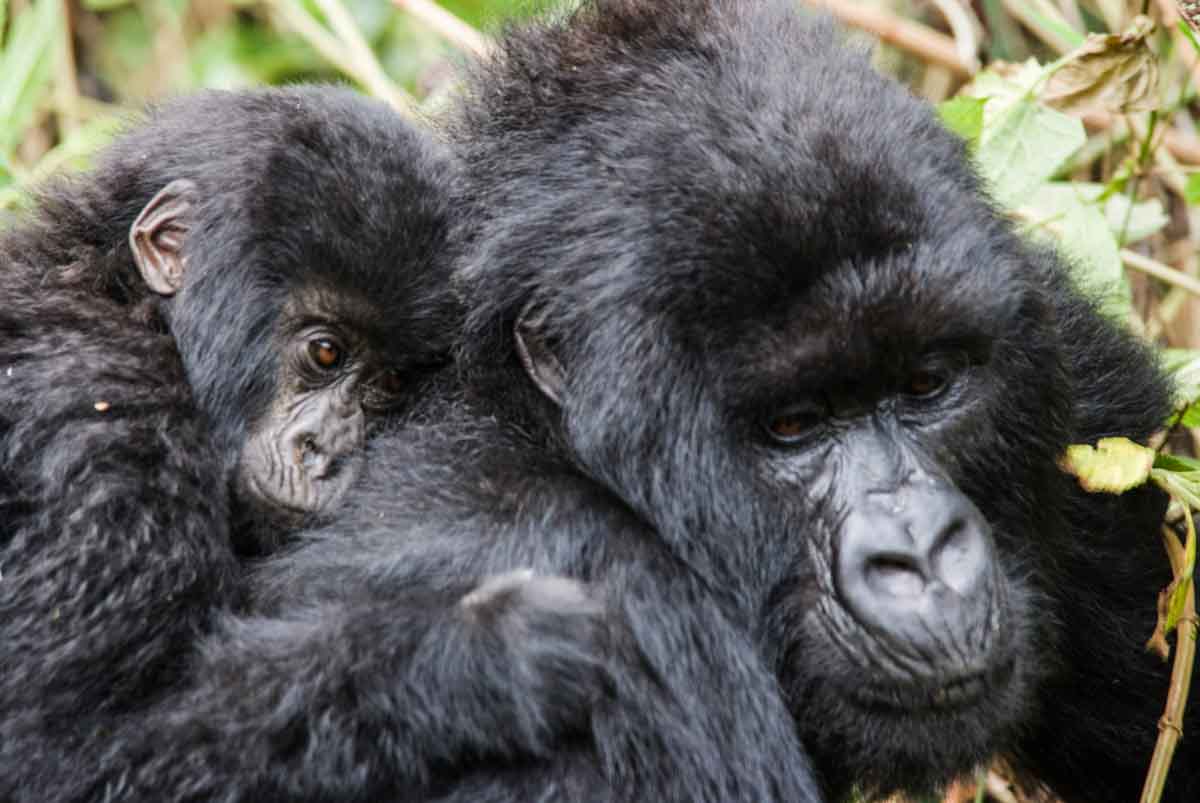 The gorilla trek on day two started the same as the day before.  Only this time with the promise kept for a challenging hike.  The journey in the van to get to our starting point was longer, and the hike from the start was beyond our wildest dreams. As I said in the day one post, that trek was about three and a half hours in total. One hour with the gorillas and the remaining two and a half driving and hiking round trip. Day two was a very different day. Exceptional in every way but definitely different.

Now This is Trekking

Our second day of trekking began with an hour drive to get as close as we could to this gorilla family. From there we parked on the outskirts of a small village of mud houses with metal roofs and then proceeded to hike through the village potato fields to get to the base of the mountain where we began the upward climb. Of course, we are careful not to harm their crops and remained on the walking path between the rows.  The villagers do not mind because they are part of the coalition that shares in the fees collected from tourism gorilla treks.

This hike took roughly four hours to reach this family group. It was by far the most grueling hike I have ever done. As we reached the base of the mountain range, our guide pointed out these Birch-like trees. Gorillas are vegetarians and will peel the bark from the trees for food. 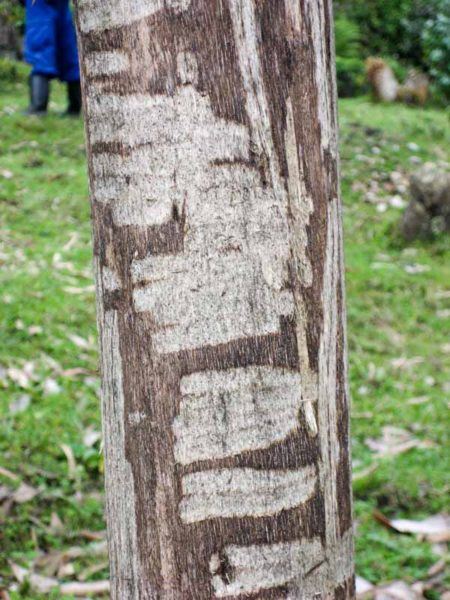 We went through several forest types at various altitudes as we climbed. At one point we walked through a bamboo forest, and our guide told us that sometimes the gorillas come here and get drunk. Apparently, they eat only the new bamboo shoots which contains alcohol in the sap. He said they are a bit more unpredictable when this happens, so he was pleased they were not here for us.

And Then It Got Serious

We were quite high up on the mountain, and the ground became covered in vines. You had to be super careful, so you do not break your ankle. It was flat for a while as we traversed the side of this mountain heading to the shallow valley between the two peaks. 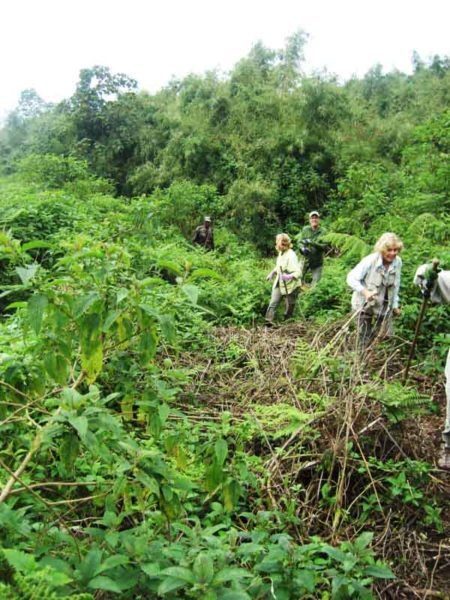 Then it was straight down on vines as we work our way to the second mountain. I do not have any pictures of the drop down until I get to the other side. It was way too steep, and I was afraid to pull out my camera and lose my grip. 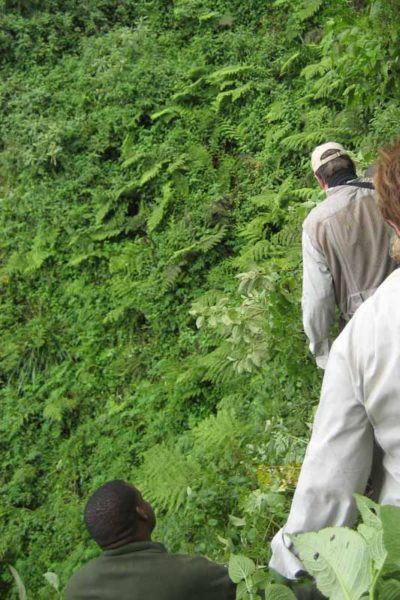 As you can see here how steep it became as we worked our way around to the point where we could start to descend.

Ok, the image above shows our vertical descent from the other mountain. If you look on the upper left side of the above picture, you will see a black shadowy area. This is where we emerged from the dense forest. Then look below you will see a brown-ish area of vines. We climbed down the vines to get to the nearby valley floor before we began the climb up. 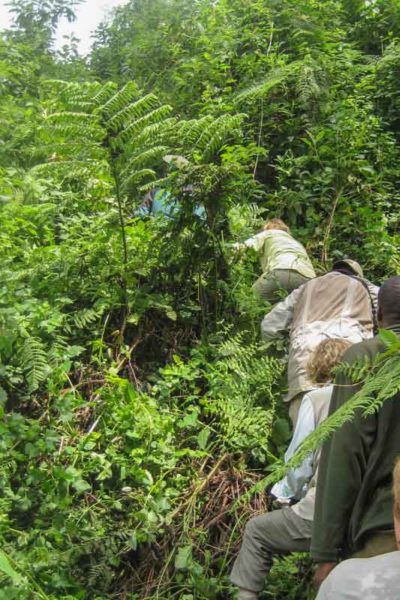 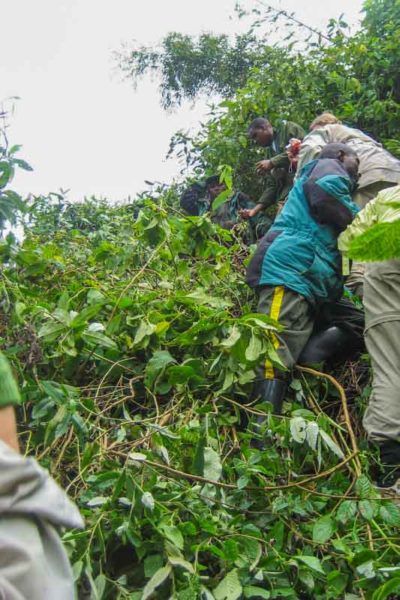 Then it was straight up again. We were told that the family was just below the peak in a small relatively flat outcropping and we were almost there. This was grueling. But I would do it again in a heartbeat. This trek made the time with this gorilla family even more special.

We arrived. But immediately, Lynn had to move to a new location. She was too close to one of the gorillas. 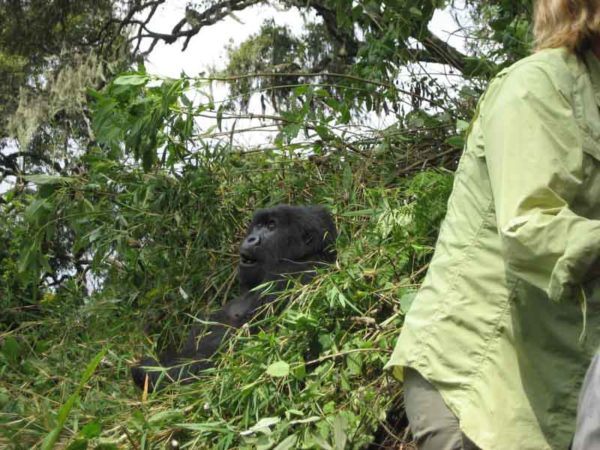 But where they were and where we could go had limited options. We all moved back as far as we could. Even doing that some of the gorillas moved closer to us that the 21 feet permitted. But we had nowhere to go other than to leave. Rather than do that, the guide taught us some body language and grunts to inform them that we were submitting to them.

This was especially important for me, as I had my camera withthe telephoto lens. You are not suppose to look them directly in the eyes. Shoudl your eyes meet we were told to look down. To the apes, my lens was a large eye so I had to drop the lens down and make a series of grunts. 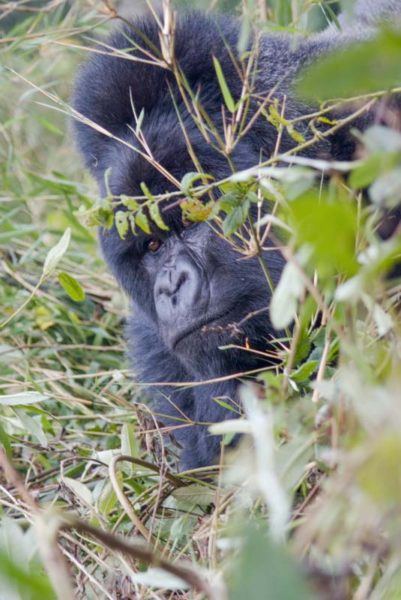 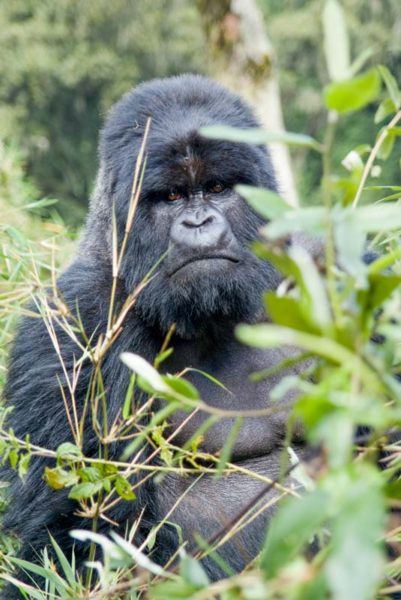 This silverback wakes from his nap and makes himself known. This is exillarating. 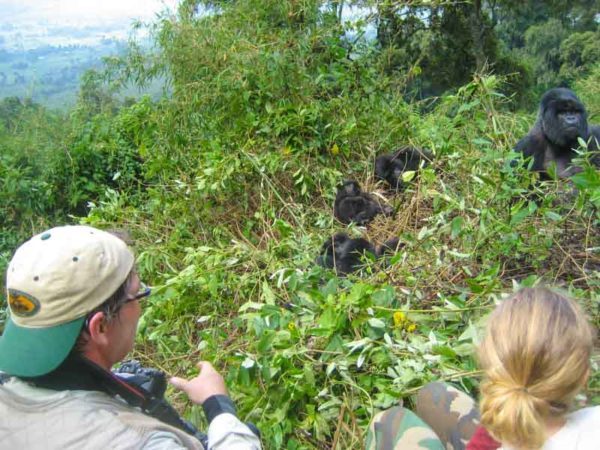 Here you can see that they were really close. So close I had to switch from my telephoto lens to a medium range lenses as I could not focus. 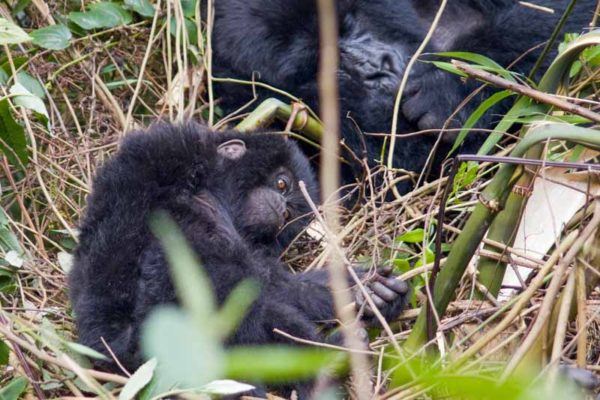 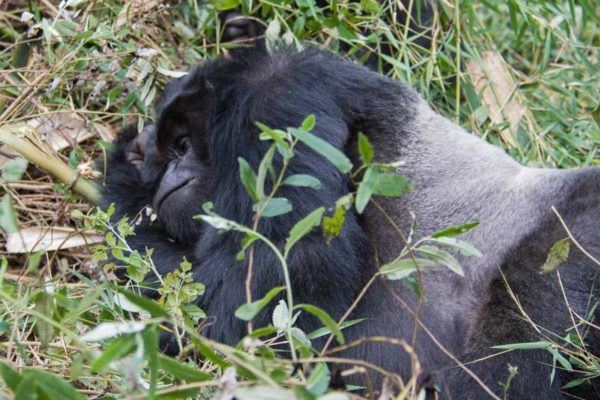 As you can see in the above two images. He had lots of babies that he needed to protect. I guess the grunting worked because de decided to nap again. On this experience the family was was more restful and lounged around unconcerned by our presence. As the minutes ticked away and we got close to the end of our hour, the family got restless. At about an hour and ten minutes, they all got up and started to head down the mountain and away from us. It is almost like they can tell time.

So we all got up and got in line to reverse the descent, ascent, climb and climb some more. The trackers had already descended because there was not enough room for them to stay with us. So they waited at the bottom to assist us in the climb down.  So the all of the women went first, then the guide. After that was me and finally Gary.

The climb down was taking a while. Just as I was starting down, I felt a tap on my shoulder. It was Gary. He said, “she’s back!” and motioned that I hurry. You see one of the females was right behind him. It was as if she wondered why we were still there and came to check it out. Gary’s eyes were bulging and huge as she was so incredibly close. We kept moving and she wandered back to the group. Once Gary and I reached the rest of our group, his excitement and fear from that close encounter was recounted for us all. That he said, is something he will never forget. 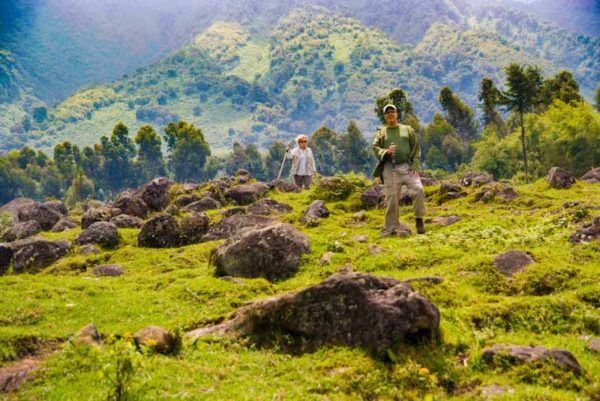 In this shot, you see Gary and Luci after our exillerating descent and trek. In total, this experience was eleven hours long from start to finish. And certainly not something that any of us will ever forget.

I end this post with a baby gorilla’s hand holding a piece of grass as it sleeps. Again, almost human. These magnificent creatures deserve our protection to live long and happy lives without fear of poachers. 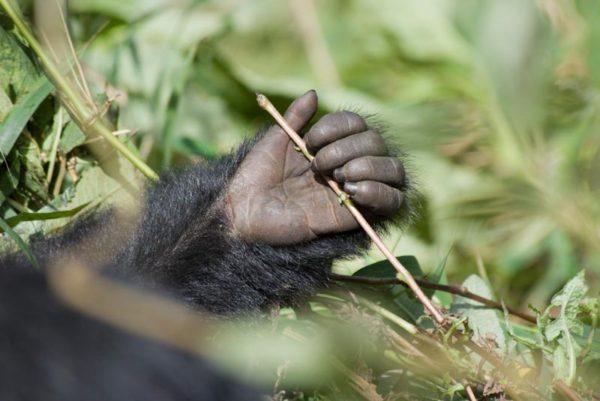 For more information about gorilla trekking check out: The Africa Adventure Company, one of the world’s leading African continent travel/safari experts.