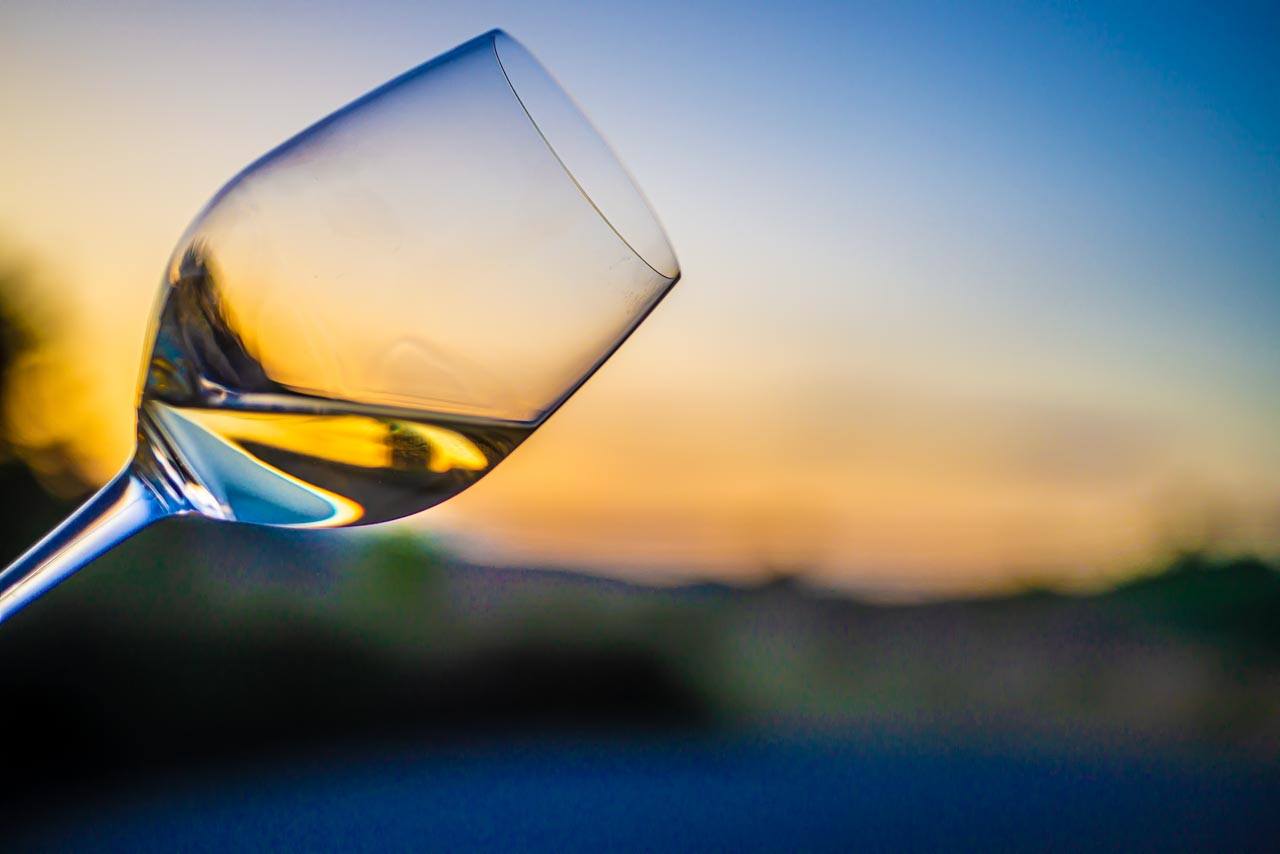 Last week, we had my sister’s two dogs for eight days while they went skiing. If there were ever a time that we “needed” wine as much as we wanted wine, this would have been it. Don’t get me wrong; we loooovvvvve these puppies, but a 14-week-old can be a holy terror, and Aspen is no exception. Thankfully, Breezy is very patient with her, as are we.  The scheduling of the puppies and the wine events was a coincidence because we could not have planned this if we tried. But having several wine events, including two tastings on Tuesday, a wine dinner on Thursday, and my Signature Wine Tasting Club on Sunday was perfect. Dogs all day; wine most nights. So let’s get started, shall we… 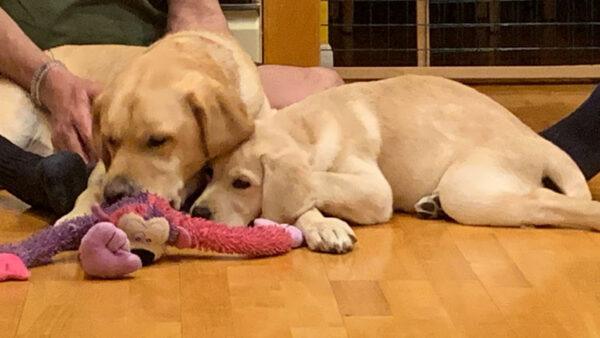 The first of the tastings was Centopassi, a small producer from Western Sicily. Not only do they make delicious “everyday” wines, but they also produce some stunning single-vineyard wines as well. Gary and I were able to try both the Giato Bianco ($18) and the Giato Rosso ($19), which are “Thursday wines” because they sell for under $20 a bottle (to be a “Tuesday wine” it must be under $15.00).  But we also sampled two of their single-vineyard wines, Rocce di Petra Longa Grillo 2017 ($24) and the Agrille di Tagghia Via Nero d’Avola 2017 ($24).  Dang, even the single-vineyard wines, are super affordable.

“Centopassi” means “one hundred steps.” The name pays homage to the lengthy process for the Sicilian government to confiscate the land from convicted Sicilian Mafiosi.  Once successful, the property was then leased to a consortium, Libera Terra, to farm the land and produce the wines under their Centopassi label. ‍

“Western Sicily grows a lot of OK wine, but the wines from Centopassi are different. They come from various vineyards in the high Belice Corleonese, a plateau at over 500 meters(1800 feet)above sea level, near the town of Corleone, south of Palermo.

The soils are clay of various kinds;
at an altitude that gives cool nights and fresh acidity at harvest;
the vineyards – cultivated organically;
the varieties are indigenous to Sicily, which is to say adapted to the conditions found here;
the winemaking allows the native character of the fruit to shine and is not at all intrusive;
the results range from excellent everyday drinking (Giato Rosso and Bianco) to the best Sicilian single-vineyard wines I’ve had outside of Etna.
The whites are particularly striking, vivid, and mouthwatering, but the whole range is consistently excellent.”

I came to this tasting in search of excellent, affordable Italian white wines. That goal was easily achieved tonight. The two red wines were also delicious, and if I were on a search for Italian reds, I would be delighted with them. 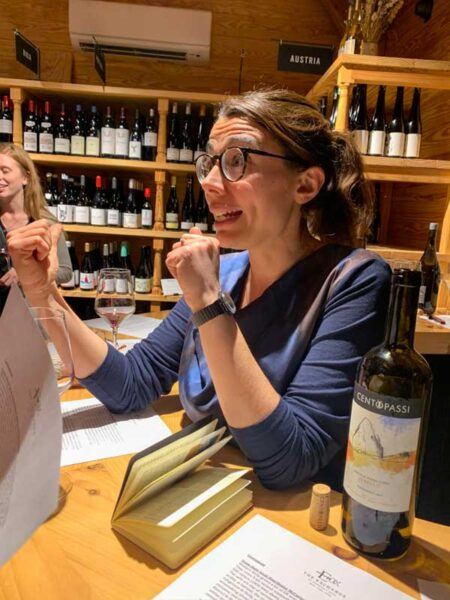 Tastings Are Fun: The White Wines

We started with the white blend, which is a blend of 60% Grillo 40% Catarratto.  I am a fan of Grillo, so I was curious to see what the addition of Catarratto would bring. Catarratto is the most widely planted grape on Sicily. When done well, it makes light, easy-drinking wine with a fuller body. Not all Catarratto is done well, so know what you are buying. 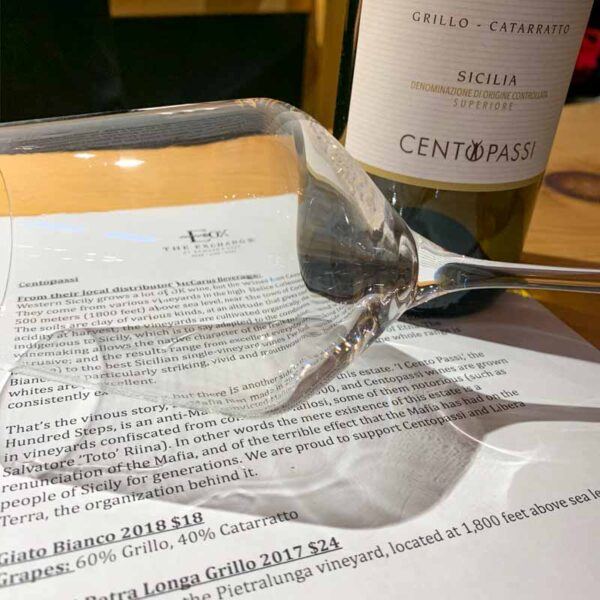 The Giato Bianco 2018 is delicious. I think my first word was “lovely.” This wine definitely has more weight than Grillo, so the Catarrato has done its job. We then moved to the Rocce di Petra Longa Grillo 2017, a single-vineyard Grillo. This is outstanding and a great example of what a Grillo can be. It has bright, crisp acidity with a smooth texture. It expresses both lemony citrus and mineral notes. Grillo is not an expensive wine, and I have had several examples for under $20 that met the mark. But this one does rise about, and I will and did pay the $24 a bottle price tag. 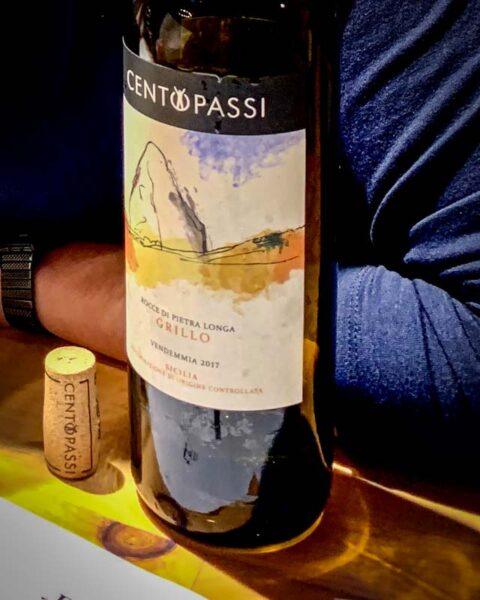 Actually, we came home with both of these white wines.

Tastings Are Cool: The Red Wines

First up is Giato Rosso 2018 is a blend of 70% Nero d’Avola and 30% Perricone. This wine showed great balance and is very drinkable. Notes of bold red fruit and earth are both prevalent. Gary and I both liked with wine, and had we been in search of drinkable Italian reds; this would have been in our basket. 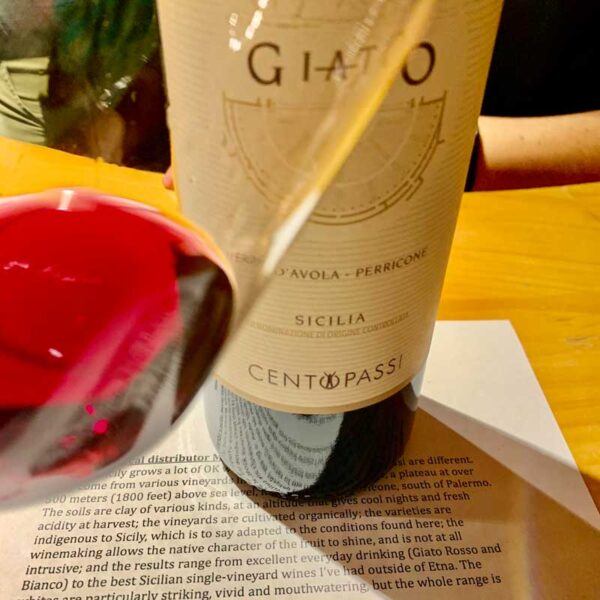 The last wine of this tasting was the single-vineyard Agrille di Tagghia Via Nero d’Avola 2017. This wine blasted into the glass with a big red fruit nose. The flavors were more mellow but also tart on the palate going a tad sour cherry. The upfront tannins, in my mind, make this more of a food wine. Both of these reds were delicious. The Giato Rosso would make a great party wine as it is so easy to drink. The Nero d”Avola would be perfect with a hearty stew. 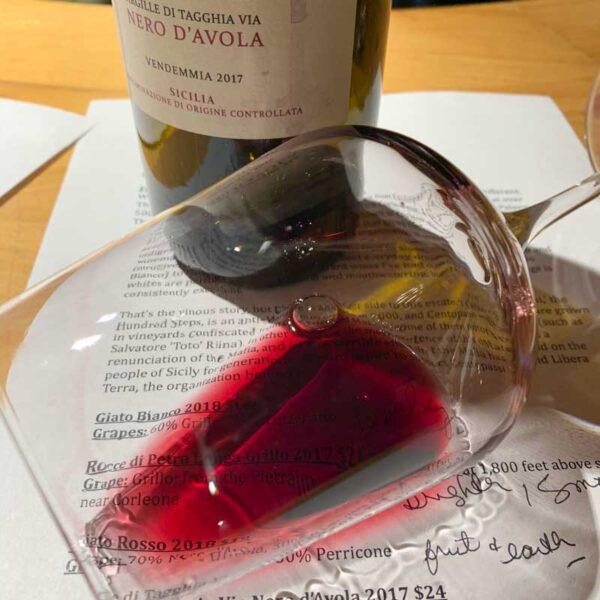 Limited supply available at Edmund’s Oast Exchange… So get them now.

This tasting was a different animal in that the tasting did not focus on a particular winery or even a regional AVA. (Technically, Oregon is a region, and it is an AVA, but I think you know what I mean here.) Three of these wines hail from the most well-known AVA in Oregon, the Willamette Valley. Of the other two, one is from Rogue Valley AVA, and the other is from Walla Walla Valley (OR) AVA. Rogue Valley is the southernmost AVA in Oregon, and the Walla Walla Valley (OR) AVA is the easternmost.

Note: Walla Walla Valley is more well known as a Washington State AVA, but there is a smaller portion across the Oregon state line.

This tasting is part of Wine & Co.‘s every Tuesday evening tasting schedule. 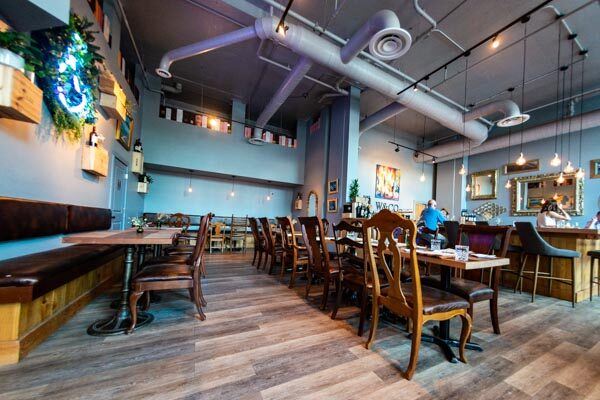 The wines are distributed by Grapevine Distributors and presented by Alison Carrigan. I was not sure what wines were going to be offered, but because I had just been to Willamette Valley last August, I wanted to see what was being uncorked.  As it turns out, I had already tasted the two of the three Willamette Valley wines but was up for tasting again. 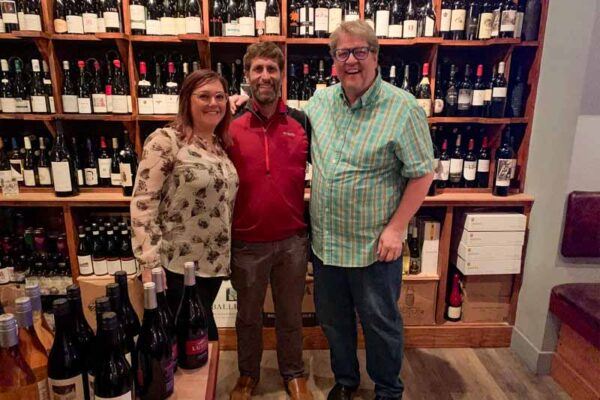 The first wine of the tasting was a sparkling brut from Argyle Winery. They are the big player in Oregon, focusing on sparkling wines. And they do a great job at it. This was a perfect wine to start. Crisp, clean. Yummy. 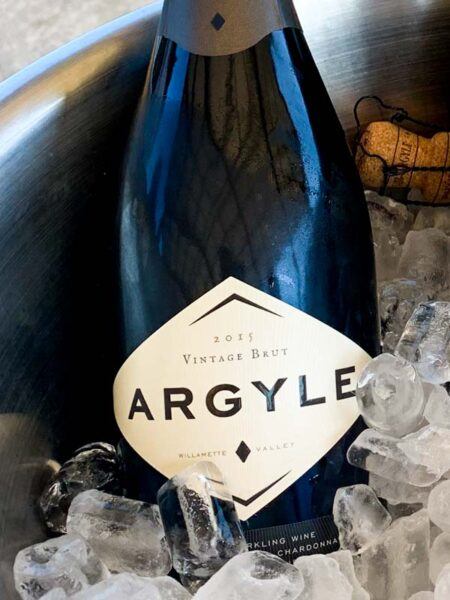 An Elk Cove Vineyards Pinot Gris was next. Great balance with delicate floral notes. It is a tad light on the acid but enough to make this a perfect cocktail wine and a crowd-pleaser. This was the one Willamette Valley wine that I had not tasted. I feel this represents Oregon Pinot Gris/Grigio very well. 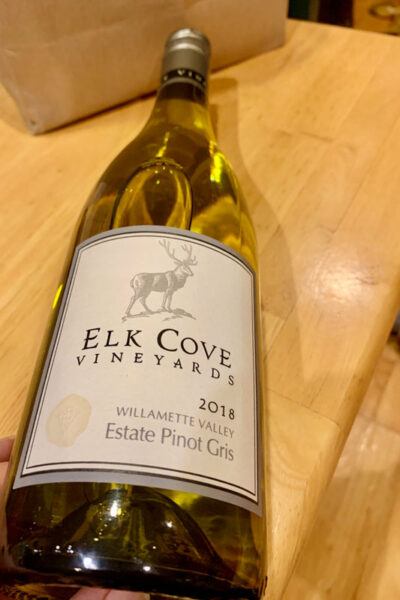 Next up is The Amity Vineyards White Pinot Noir. It is a wine that I love to drink, but IMHO they need to rename this wine.  It’s not white. And the amount of color may not be that of a classic rosé, but it is more roseé than white for sure. Perhaps in other vintages, there has been less or no color, but this vintage has enough color to at least call it a blush or a blondie – just not white. All that said, I like the perceived flavors and acidity. I just do not like the branding. The truth is, Gary and I like it so much there is a bottle in our white/rosé wine cooler right now. 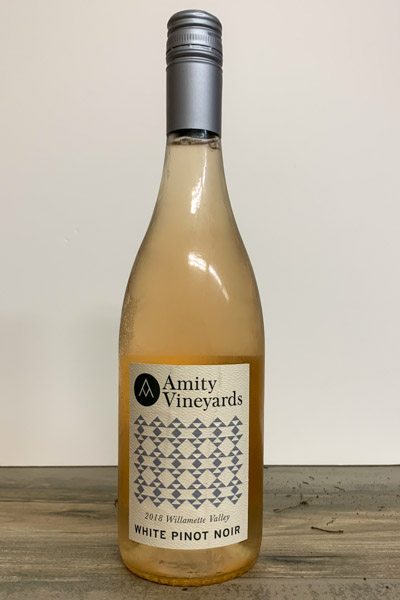 The Wines – The Reds

Next up is a Pinot Noir from Foris Vineyards in the Rogue Valley. Not my cup of tea, but I am sure there is a palate out there that loves this wine. On the nose and through to the palate is heavy smoke aromas and flavor. I had someone at the tasting if this was a result of the wildfires out west. The answer is no. If I were to guess it is from the barrel toasting, but honestly, only the winemaker knows for sure. A unique wine for sure. It may be perfect with some barbeque, and I am judgemental. I accept that.

This last wine of the night is a Syrah from Walla Walla Valley, Oregon AVA. This as a very drinkable wine. My palate at this point was shot because I did not spit and drink enough water.  But we liked it enough to buy a bottle and sit down to enjoy it. I have never had a Walla Walla OR AVA wine.  This is my first. 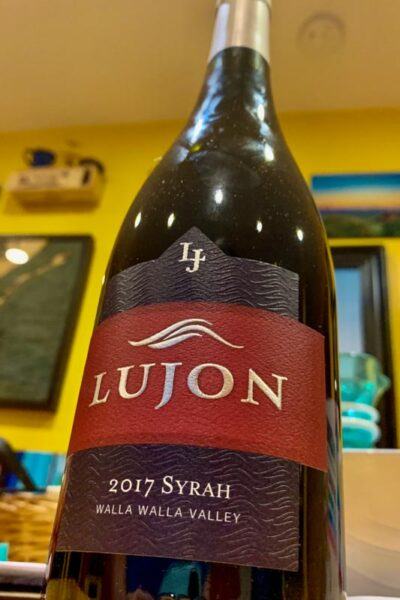 Both of these tastings were fun to attend and I always learn something new. There are wine tastings somewhere every weekday somewhere in Charleston.  You might be surprised and what you will find.

We drank, we sipped, we conquered, and we are exhausted. 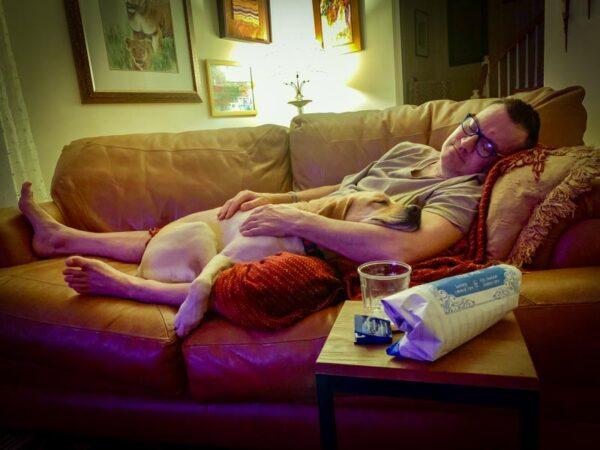 This is a cross between Bread Pudding and Casserol

Today is a very, very happy day. My favorite pizza

When I was shopping for the wines in the “Under

I was looking for the Tiberio - Cerasuolo d’Abru

I love tasting wines from countries that don't usu

Bistronomy by Nico opened in the middle of and as

Inexpensive does not mean bad. If you know what to

This is the best overnight French toast casserole

I recently hosted a virtual wine tasting with Cana

This Chardonnay continues to be a crowd favorite f

And today... On a lighter note. . Although the mug