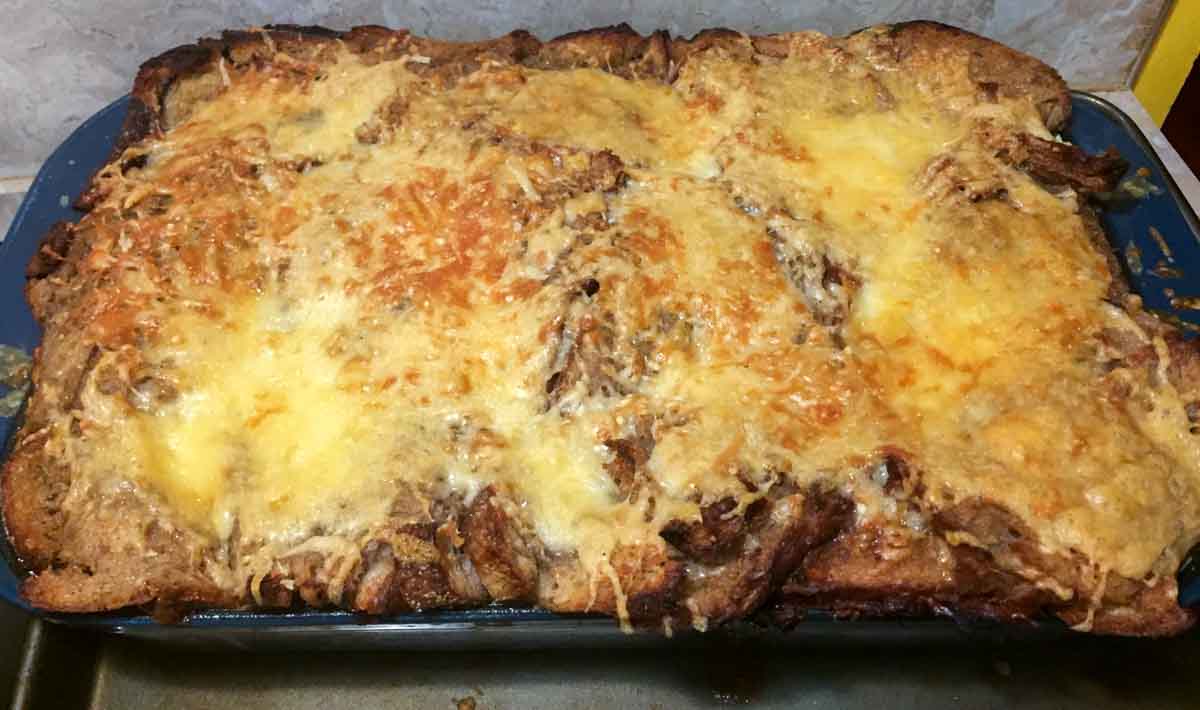 This past weekend Gary and I had two couples over for dinner. I had several recipes I wanted to try and needed a few guinea pigs. Enter Bryan & Craig and Shawn & Michael. For me, this was an all-day affair as I just decided what yo make on Friday morning and I needed to get to the store asap. But my Friday was a hot mess with a wine delivery by UPS that I had to sign for so I could not leave the house until it arrived. And that was at 4:30p and I had to pick Gary up at 5:15 to have dinner before the Mavis Staples concert at the Gailliard. Still had to get cleaned up cause I can’t hear the doorbell in my bathroom. I know, I know… First World problems. But there was no way I was missing that delivery and have the wine sit on a hot truck all weekend. It has been in the 70s and low 80s already and there is no sign of cooling anytime soon. Just say NO to cooked wine!

Oh, I digress. My Saturday started with a trip to the grocery and then mad house dinner prep for the rest of the day as the guests arrive at 6:30p. Here is the complete menu:

Lastly, I will not be sharing the recipe for the unmitigated disaster of the Red Wine Brownies. Allow me to explain.

It was said before, and I will say again, I am NOT a baker. I want to be a baker. I try to bake. But flops are inevitable even when I follow the recipe to a “T” as I did for my Red Wine Brownies. They were supposed to turn out fudgy, moist and dense. They ended up being cakey, dry and dense.  I at least got the dense part correct. I knew I was in trouble when I stuck the knife in the middle to check for doneness. It should have come out mostly clean, and it came out spotlessly clean. I cut out a square, and I choked it was so cakey and dry. I tried several things to moisten including punching holes with a chopstick and dumping a can of sweetened condensed milk on it. That was not enough; it still needed something. So I pulled out a jar of my favorite tart cherries that I buy in mass from Trader Joe’s, poured into a saucepan added a cup of the same wine I used in the recipe and reduced the liquid by half and served as a fruit topping and sauce. 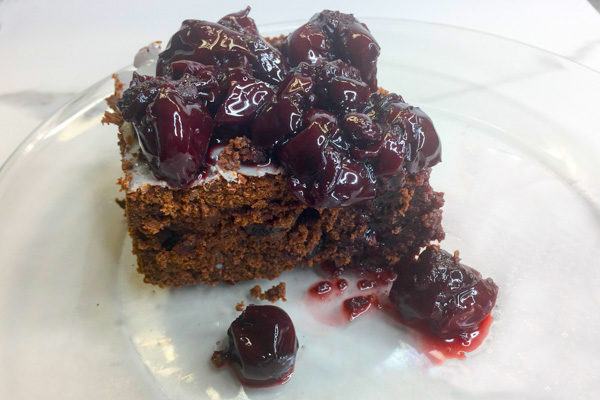 That saved it enough to be worth serving it, and everyone seemed to like it. But I knew it was not what I wanted. I will try again. 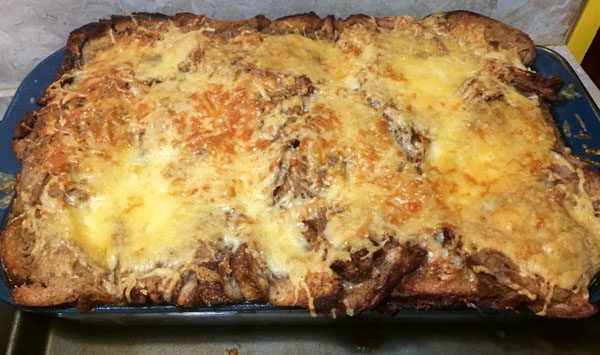 I love French Onion Soup. It is just a simple, savory broth with caramelized onions. But what makes the soup so over the top is the floating toasted bread covered in melted, golden brown cheese. By the time you eat the soup, the bread gets soft and pillowy, and the cheese is gooey and runs strings out of your mouth as you wallow in soup heaven. So when I read about this dish, it sounded to me like the “heaven” portion of the soup experience.

A panade is basically a bread soup. For a person that has mushy texture issues (like me), had I not seen “French Onion” in the title I would have passed on it. But I stopped, read and could taste how good this could be. So I had to give this a try, and I am so glad I did as were my dinner guests. As we all began eating this course, the table fell to a quiet hush for the first bite. The moaning and exclaiming began. Bryan and Craig both said they thought I blew it out of the water last week with the CCECGBS Fondue Bites but this panade blew the fondue bites out of first place in a New York minute. And let’s just say everyone got a “gold star” for cleaning their plate for this course.

Don’t be turned off because of the number of steps this dish requires.  It is not complicated, and it is a real show stopper. Here is the recipe:

I bought two loaves of pre-sliced sourdough bread earlier in the week and set out on my baking racks to dry out. On prep day, I lightly toasted each slice in my toaster oven. If this does not work for you, please follow the instruction below to dry and toast on the same day.

Lay out the slices of bread on your oven racks in a single layer to toast for approx. 20 minutes. Toast until dried out and lightly golden. Repeat until all slices are dry and toasted.  Set aside.

Once the onions cook down a bit and release some liquid, remove the lid and increase heat to medium-high. Continue cooking and occasionally stirring until onions are tender and dark golden brown, about 45 minutes total. Turn off heat, add vinegar and wine and stir to deglaze. Taste, and adjust salt and vinegar as needed — the onions should be sweet, savory and pleasantly tangy. Spoon onions into a heatproof bowl, and set aside.

SIDE NOTE ABOUT STOCK

The original recipe called for only chicken stock. But every recipe I have ever seen and or made used beef stock and that concerned me. I did not want to venture too far off so I used a combination of chicken and beef stocks, and I think it worked really well. The beef stock added a richness that enhanced the broth. Also, the original recipe said to use homemade stock which I did not have. In my mind, a soup stock would be flavored with herbs

Return pot to stove. Add your stock, sage, bay leaves, onion powder, garlic powder and 1 teaspoon salt, and bring to a boil, then reduce to a simmer. Taste, and adjust salt as needed — it should taste like tasty soup broth.

Grate your Gruyère cheese and place both kinds of cheese in a medium bowl, and mix to combine.

Butter the inside of a deep 9-by-13-inch (or slightly larger) enameled cast iron or glass baking dish. Line the bottom with a layer of toasted bread, breaking up pieces as needed to form a solid layer. Spoon half the onion mixture evenly over the bread. Sprinkle with 1/3 of the cheese mixture. Now add the second layer of bread, the remainder of the onions and another 1/3 of the cheese. Top off with a final layer of bread. 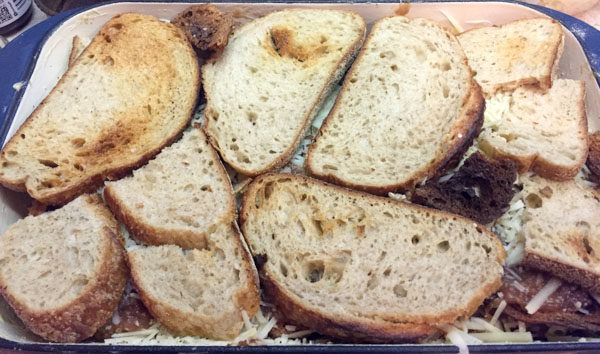 Remove the bay leaves from the warm broth.

Ladle 3 cups of stock over the panade, then wait a minute to allow the bread to absorb the broth. Press down on the panade with a metal spatula to encourage the stock to be absorbed. Keep adding as much stock as the panade will absorb without pooling on the top layer or overflowing. Save any remaining stock for another dish. 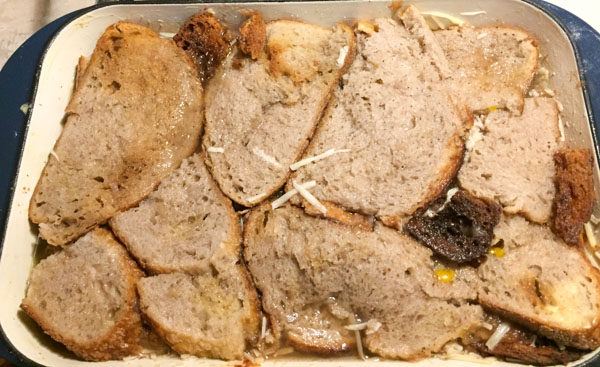 Dot the top layer of bread with remaining butter, then cover with parchment paper and foil. Place the baking dish on a baking sheet to catch any overflow stock, then slide onto the center rack. Bake for 40 minutes, then remove foil and parchment, sprinkle with remaining cheese and return to oven for 15 minutes more. Bake until golden brown. 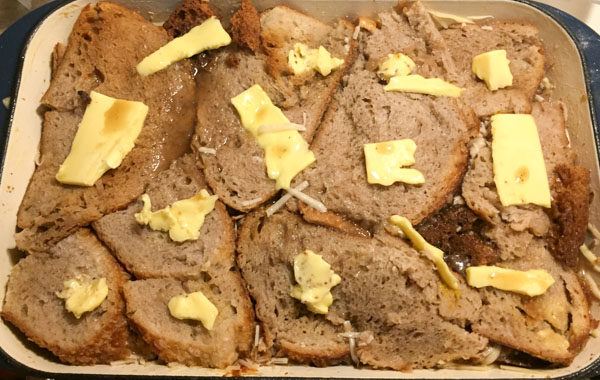 Remove the panade from oven, and allow it to cool for 10 minutes before serving. 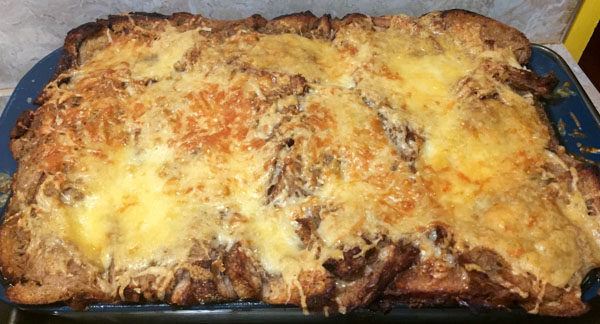 If you have shallow bowls that would be the ideal way to serve the panade. I used my octagonal glass dishes. 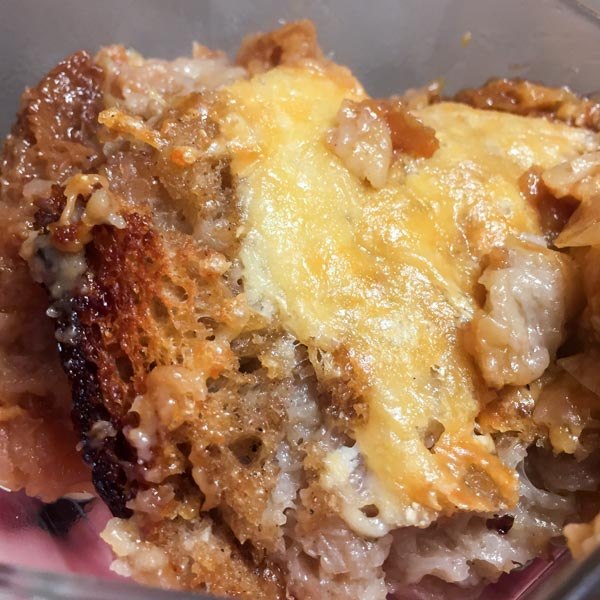 Download the PDF for this Recipe:  French Onion Panade

This dish was a great start to the dinner. As I said, everyone loved it.  I could see making this dish and serve at Thanksgiving dinner instead of stuffing.  Shawn said he could eat it as the main dish with a salad for dinner, lunch or brunch. I could not agree more.

My apologies for the lack of images as I progressed with this dish. I got all caught up in cooking and lost sight of the mission.

These are the white wines that I served with the First Course.  Both were equally delicious. The Vouvray offered the floral notes that one would expect and the Saumur (Chenin Blanc) was for those looking for a drier note with a citrus summer profile. 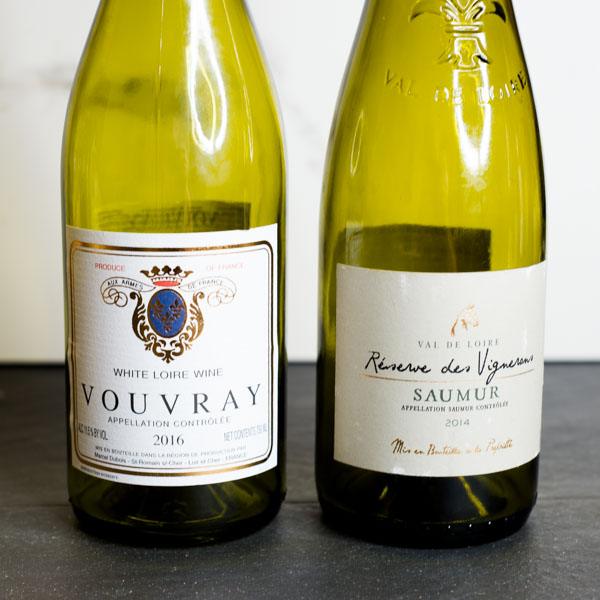