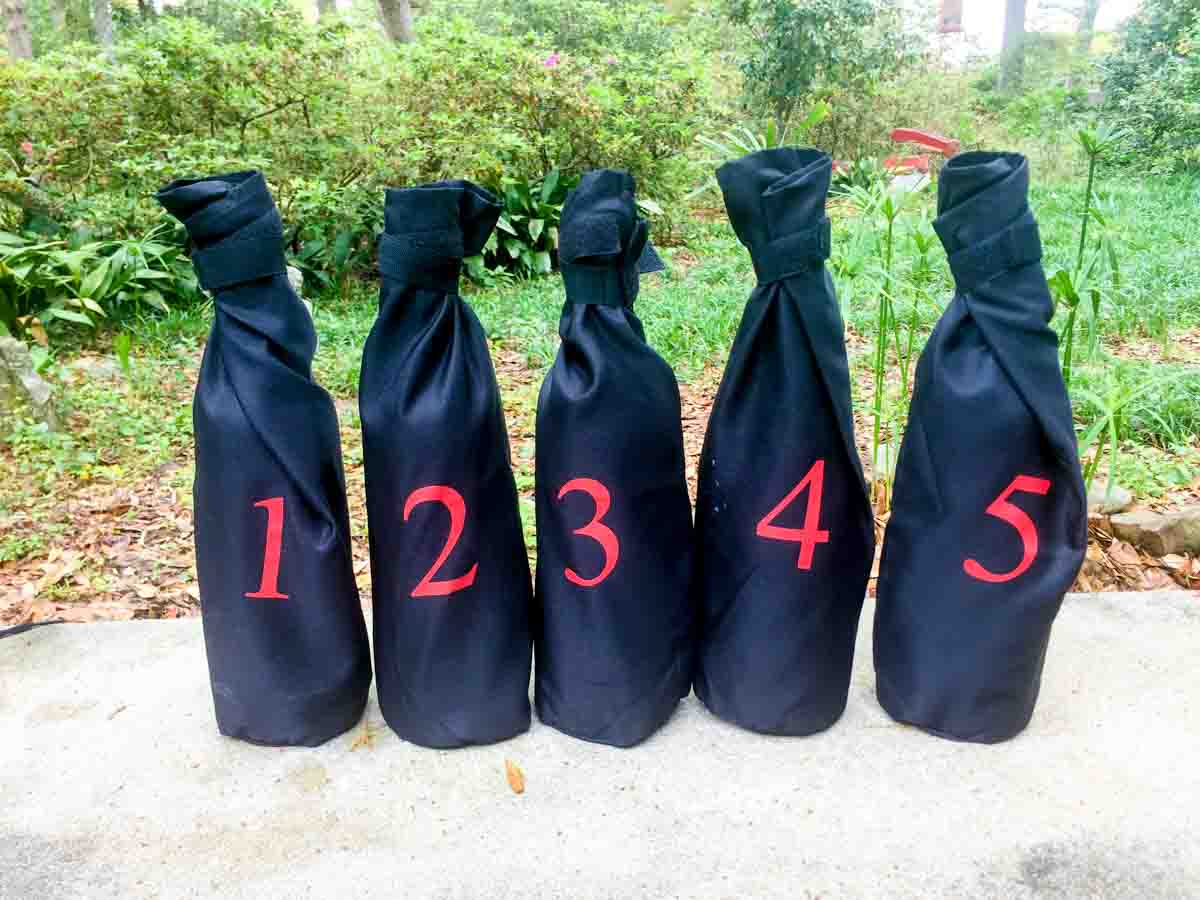 Blind Tasting : A Mutiny and a Game

This is the second of three posts from the Dinner Party for Ten. In this post, I will share with you the blind tasting game that started the evening. Oh, in case you are wondering? Throwing a dinner party during March Madness from some is a crime. What do I know about “the sports.” So yes, the semi-finals of the basketball tournament had to be on for the Loyola game.  My female guests all politely requested that they be able to check in on the game. And it had nothing to do with the nun.

Meanwhile, all the guys were enjoying a glass of wine out on the porch. Fortunately, the ladies could stream the game on a phone while we blind tasted and they did not care about the second of the two games that would have interrupted dinner. Since two of these women were my sisters, I gave them an ample amount of grief because that is what we do.

The Lasagne Melange dinner party for ten that I had a week ago Saturday began with a blind tasting. Five different wines from around the world, two whites and three reds, hidden from view with only your nose and your ability to taste to determine what you are drinking. It was not my intent to make it so close to impossible for the average person, but I guess I did.

I knew I was in trouble when I told my classmates at Somm School earlier that day, the wines I selected. They predicted I would be clubbed to death and left in the marsh, only to be found when the tide rolls back to the high water mark.  I “thought” I had only one challenging wine (a white wine from a red grape) intended to make them think. The reds, I thought were all sure things. I guess I was wrong.

I created an answer grid to write the answers. As soon as they looked at it, they all started laughing at me, and my elder sister flipped me the bird with a comment along the lines of ‘you have got to be kidding me.’ As they continued to read through the grid, the decibels from the laughter grew louder and louder. I quickly knew I was in trouble.

So before we even got started, they decided to pair up. Since my younger sister does not drink wine, this meant that there were four teams of two. Side note on her: She got bored fast and went in the other room to watch the game on a big screen.

With wine number one, I talked them through the grid and provided as much information as I could to help them figure out what I was looking for in an answer. Having not done this before with friends, I wanted to keep this fun. Afterall it is a game, so I made modifications along the way to make it easier for them. Additional we scored each wine immediately following the tasting. This either gave a boost of confidence or caused more “bird flipping.”

What I Asked and What I Got

Is it an Old World or New World wine?  I ended up giving them the answer to the first question.This way they could have a chance with some of the remaining location answers. Old World is anywhere in Europe. New World is everywhere else – USA, Canada, South America, Australia, New Zealand and South Africa.

Where (country or US state) is the wine made? I did not make any changes here, but this was still really difficult for most.  Possible Answers – France, California, Chile

What is the region where the wine grapes are grown? I wished I could make a change here, but this did serve as a huge laughing point in the game.  Possible Answers – Burgundy, Napa Valley, Medoza

What is appellation or sub-region?  Well if I had rotten tomatoes on the table, this is when they would have all chucked them at me. What was I thinking?  Honestly, I would have also failed this part for several of these wines. Why did I even think this was possible. Possible Answers – Alexander Valley, Morgon, Cariñena.

Is it a single grape varietal or a blend? – This is a bad question, and a mutiny was impending if I did not give them points for answering “single variety” or “blend.” What I should have asked is, ‘what grape variety (s) were used to make this wine?’  So I gave them points if they said blend. Otherwise, they had to guess the variety. Possible Answers – Chardonnay, Cabernet Sauvignon, Malbec.

If a blend, what are the grape varieties? Ok, I only had one blend in the line-up, but you can imagine what they said about this question. Moving on!

When and How Much?

What is the vintage? Meaning what year was the wine made. Here is where folks racked up points. I gave them double points if they got it exactly, and regular points if they were within a year on either side. The eruptions of joy when they got it right was music to my ears.

How much does the wine cost? This was also a point gatherer for those teams struggling the most. I gave double points for an exact answer and regular points if they were plus or minus two dollars on either side.

This was so much fun, even for me as the game’s host. I made this much harder than it should have been. Honestly, I probably would have failed miserably. But I happily made it easier, and we all laughed our way through it.  I think all of our faces hurt after the tasting from laughing so much.

Everyone really enjoyed it in spite of the level of difficulty. And our friend Tracy commented that while her answers may have been wrong, she learned a lot. One of her takeaways was with the first wine. It was a Chardonnay. Tracy said that she is not a Chardonnay drinker and had she seen the bottle she would have subconsciously told herself not to like it. But in fact, she loved it and asked me where I bought it.

Steven and Michael won first prize. By consensus, Tracy and Craig won Miss Congeniality.  And surprisingly, Gary and my sister got last place. His takeaway was that he thought too much and did not trust his instincts. He was trying to figure out which wines I pulled from our collection not considering that I might buy something new. He also has the most trained palate in the group which contributed to his overthinking. And well, my sister was along for the ride.

I repurposed old art festival ribbons embellishing as appropriate for the prizes.  First Place; “You Pretty” aka Last Place; and Miss Congeniality. 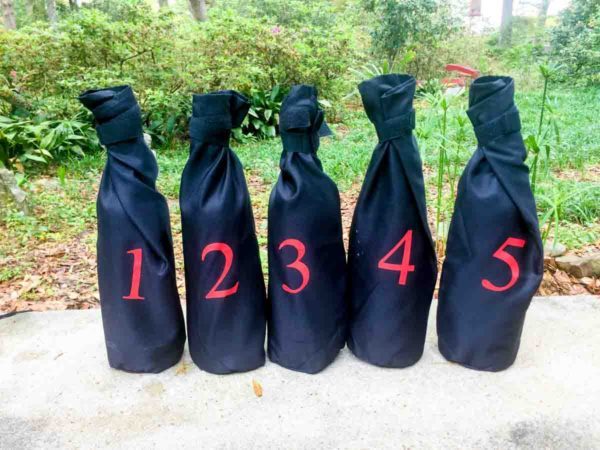