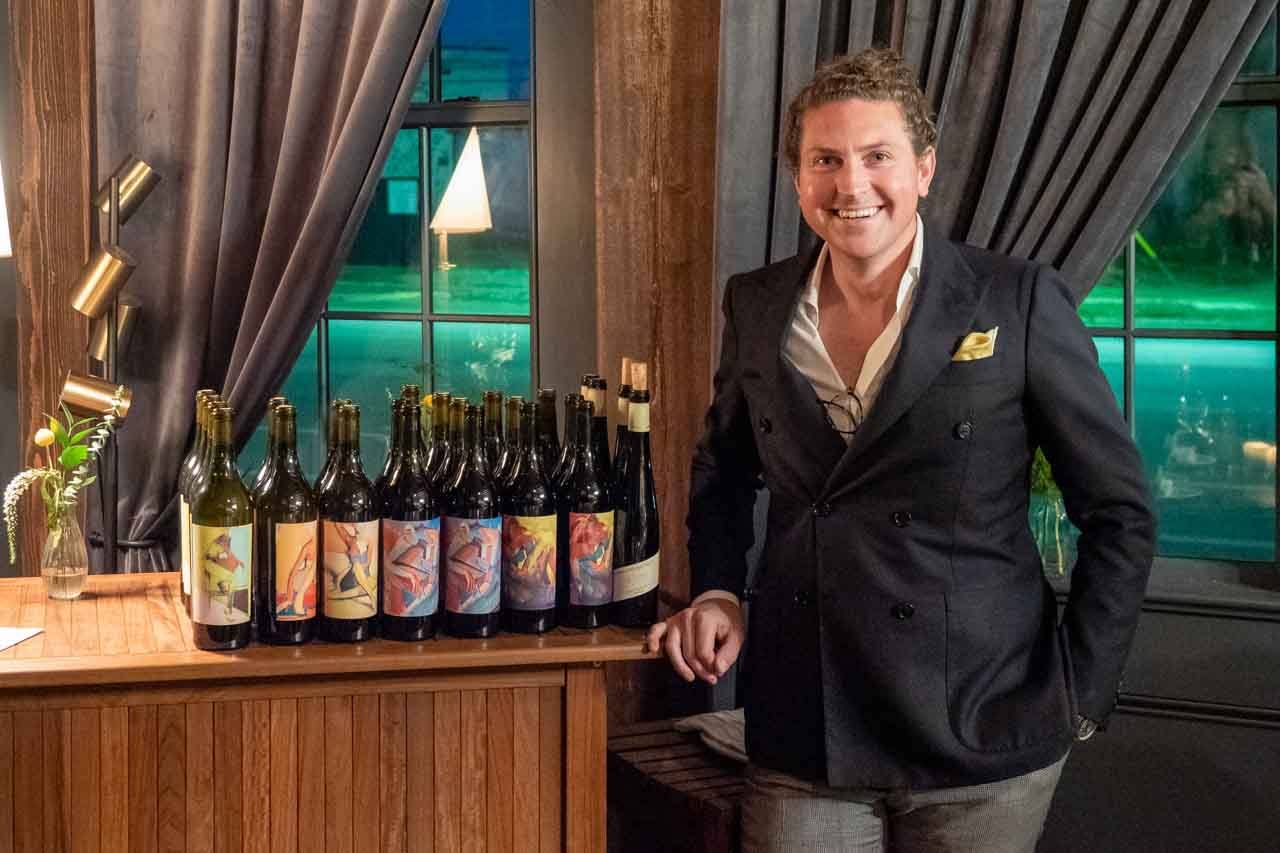 If you are a wine enthusiast, one of the best value’s in Charleston is a Wine Dinner at Edmund’s Oast. I have attended at least five or six of these dinners. Each time they blow me out of the water, and I think that this is the best they have ever done. The reality is that they do the pairings so perfectly that your senses are in high gear. While last night was amazing, fun, delicious, perfectly paired, quenching, unique, and fantabulous. They all have been. You should make a point of getting on their mailing list to learn more.

Nate Decamps hails from rural South Carolina. His great-grandfather, grandfather, and father were all doctors and gentleman farmers. So he grew up on the farm and loved it but always knew that becoming a doctor was what he was “supposed” to do. On the farm, he has memories of making wine with his dad and grandfather using Muscadine and Scuppernong grapes (Vitis rotundifolia, not Vitis vinifera) as early as four years old. Nate was fascinated by the bubbles and the smells and the time spent in that old garage. Winemaking became a part of him. But as was expected, he headed to med school as all “good” sons do.

And then his grandmother passed, and he immediately realized that life is short and that you need to do what you love. His heart was not in medical school; it was in winemaking. Right after the funeral, he dropped out of school, packed a bag, and headed to California to make wine. I think it was an excellent choice.

The grapes are organically grown. The fruit for each wine comes from a single vineyard. The resulting wines are also organic with minimal intervention. They are unfiltered and unfined, which makes the wines appear cloudy. That is not a falt. It is intentional as Nate makes wines that he wants to drink. He likes varietals that are off the beaten path and perhaps one’s of which you have never heard. But not only are these lesser-known; they also are rarely made as a single vineyard designate wines. The varietals include Pinot Blanc, Arneis, Tocai Friulano, Carignan, and Mouvedre. We were in for a treat tonight, pairing these wines with Executive Chef Bob Cook’s menu. 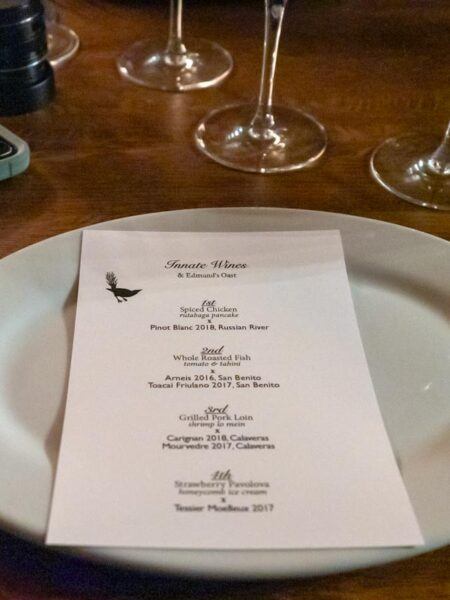 The menu for this wine dinner had an Asian flair, and quite honestly, Chef Bob killed it. 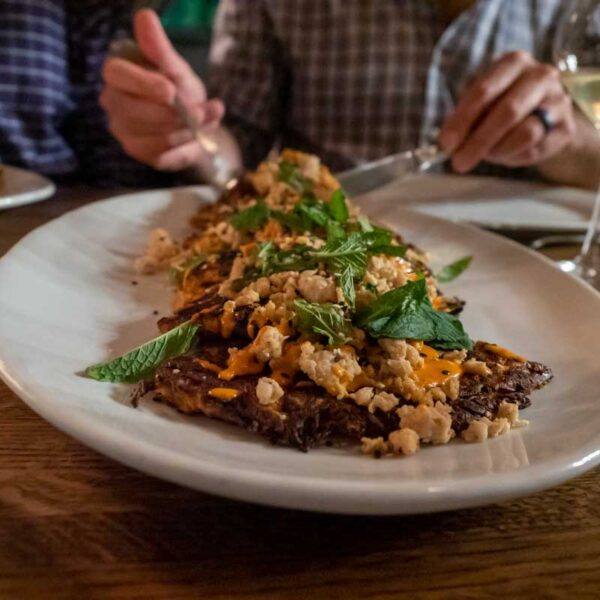 Our first course was Spiced Ground Chicken on a Rutabaga Pancake and served with the Russian River 2018 Pinot Blanc. The subtle heated spice was washed away with the wine’s cleansing acidity. The mid-palate weight and mouthfeel remind me of Chardonnay. The nose was floral, and the palate was full of orchard fruits. But the bright acidity made this a perfect food wine, cleansing your palate with each sip.

This wine was our favorite for the night. We put several bottles on our order so that we could share it with friends.

… was a Whole Roasted Snapper served with a brown sauce (similar to a Gen. Tsao sauce). It was served with two wines.

Not only are they lesser-known varietals, but Nate made these wines in a very unique fashion. Or, as he said, ” welcome to the funk zone.” The first wine we tasted was the Arneis. As I said above, from Nate’s first commercial vintage, he makes wine that he wants to drink. He favors his Arneis to be ‘browned” or oxidized. He likes his Tocai Friulano to have significant skin contact. The process of skin contact in wine is not unfamiliar, as that is how red wines are made. But oxidizing wine is a new one.

To brown the Arneis, Nate splashes the wine to release the pectins and thus oxidize the wine to this brownish color. During the barrel aging, he also racked* the wine so he could splash it a second time. The browning process brings out secondary flavors like dried pineapple and peach flesh.

The Tocai Friulano was left on the skins for 36 days. That is a long time for orange wine.  Nate is looking for intense color, flavors, and textures that come from such contact. 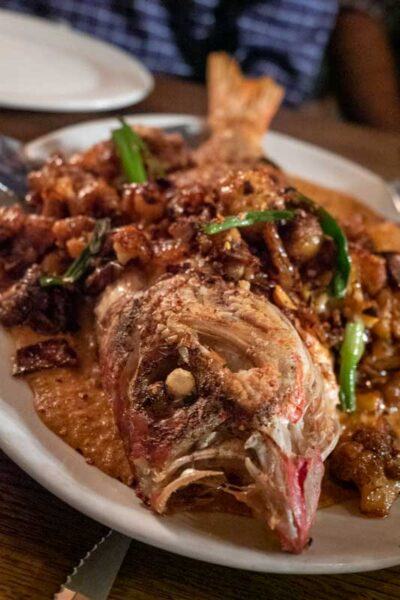 The Snapper was fantastic. It just fell off the bone, so light and clean. When the chef came out to speak with us regarding the menu, I asked him if he was channeling General Tsao. He admitted, “just a bit.” It was amazing.  And then you found these fried cauliflower florets on the side and those converted every cauliflower hater at the table. Boom. Mic drop.

Both of these wines not only enhanced the flavors of the fish but also shined on their own. I was surprised at how much Gary and I both liked the Arneis as it was our first wine that was purposely oxidized. We made sure to put a couple of bottles on our order.

The meat course was a gorgeous Grilled Pork Loin served with a Shrimp Lo Mein paired with the Carignan and the Mouvedre. 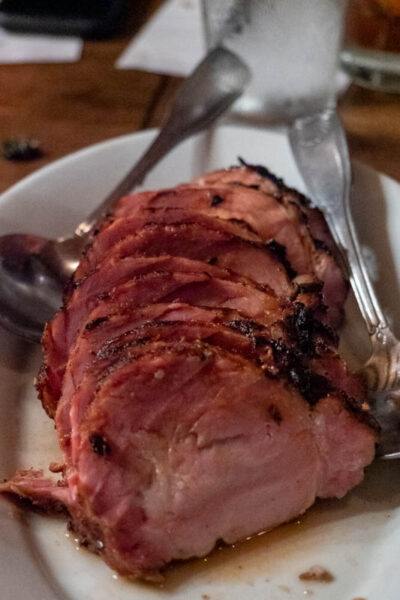 When the pork loin hit the table, there was a noticeable gasp from us all. It was perfectly medium with a great sear to hold in the juiciness. It was lean but tender, and it had a lovely smoked flavor from its time on the grill. The Shrimp Lo Mein was a great side dish to continue the Asian notes with each course. 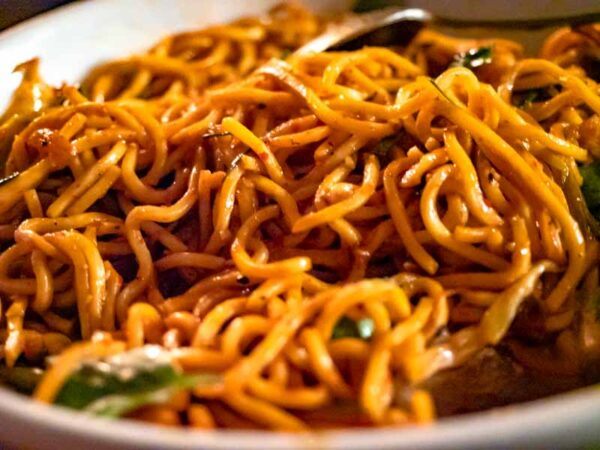 The wines served with this course were Nate’s two red wines. Both are from vineyards in Calaveras County. The Carignan is a 2018 vintage, and the Mouvedre is 2017. They both paired well with the pork and the lo mein. Our favorite was the Carignan.

It reminded me of a Beaujolais-style wine. It is light-bodied with balanced fruit and acid. This will drink well on its own or with food.  We picked up a couple of bottles to complete our order.

The dessert course was a Pavlova with honeycomb ice cream topped with fresh and grilled strawberries. The uniqueness of this dessert and its flawless presentation elicited applause (or at least I head that in my head). What a way to end a meal. Heather, you knocked it out of the park. Brava! 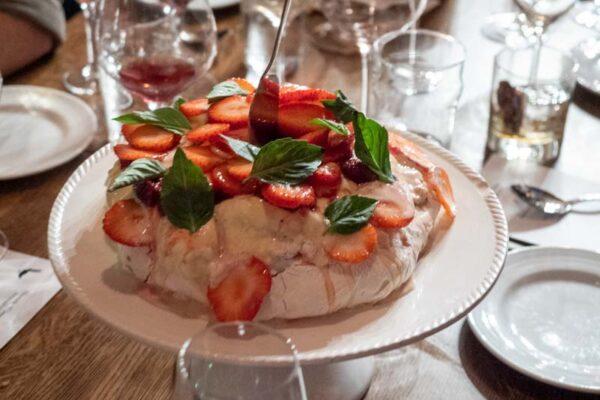 Dessert paired with a favorite wine of Nate’s – a 2017 Domaine Phillipe Tessier Moelleux**. (Another lesser-known varietal – Romorantin). Sarah knew this and wanted to make the dessert wine one that Nate loved.

I say this every time that this was the best dinner that they have done. Quite frankly, every dinner is incredible because of the effort made to beautifully pair the food to showcase the wine AND the wine to showcase the food. That is perfection and that is what they do.

All of these wines are sold at Edmund’s Oast Exchange. During the current pandemic, please call ahead and place your order. They will bring the wine to your car. PH: 843-990-9449 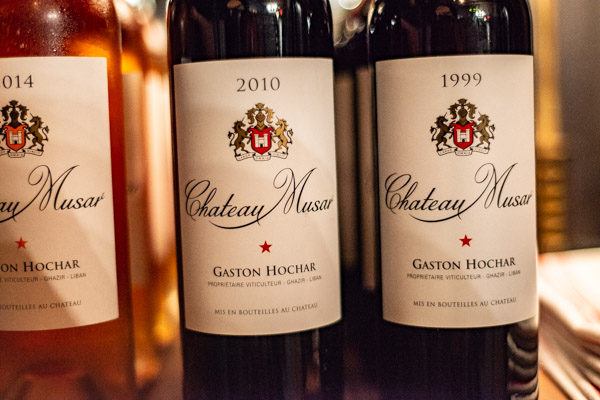 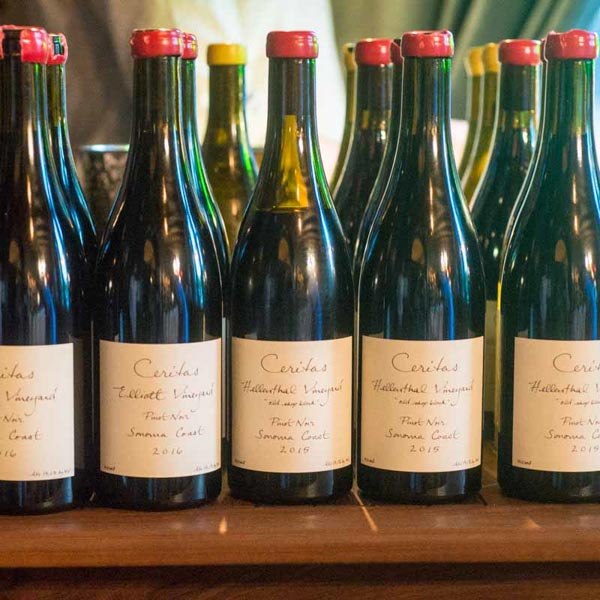 Racking wine is the process of transferring wine or must from one fermenter to the next to leave the sediment behind. Most winemakers rack wine because you do not want the wine to sit on excessive amounts of sediment over extended periods. Nate typically does not rack any of his wines but did so here to further the browning process.

Moelleux – French for soft. In wine, it is a sweet wine that contains less natural residual sugar than sticky wines. This French term can also be used to describe a dry wine whose fat dominates its acidity.

That is all for now.
Cheers,
rick