UnRecipes * Two In Your Pocket

Much like the Goat Cheese and Sun-dried Tomato Spread from a couple of weeks ago, today’s post features unrecipes. These preparations are so simple that it really cannot be called anything more. I needed both of these for my dinner party last Friday. There will be a post about that as well, but it is a much bigger post, and I need more time to pull it together. So in the meantime, here are the two unrecipes. One is an appetizer, and one is a jam.

Ok, this tapenade is the simplest you will ever make.  Go to Costco and buy this Mediterranean Olive Blend. 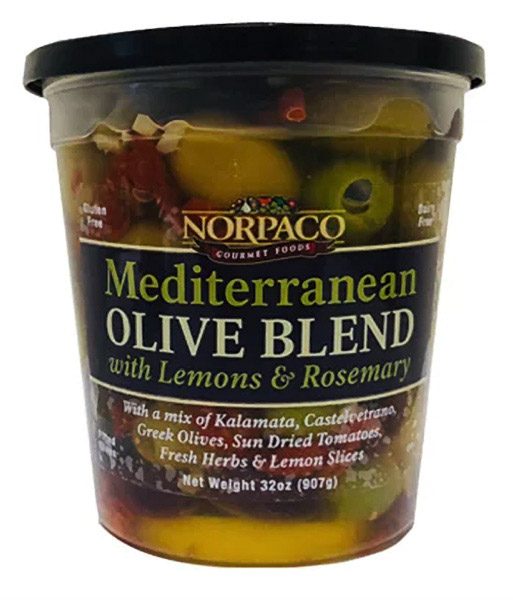 Using a slotted spoon, scoop out about half of the mixture and place in your food processor. (allow most of the olive oil to drain off.  Pull out all but 1 or 2 lemon slices (taste preference) and put back in your container in case you need for another time. Retrieve all of the rosemary stems that got into the food processor. Remove the leaves from one stem and place the leaves in the food processor. Discard the stem. Return the other full stems to the original container.

Add one garlic clove or its equivalent. 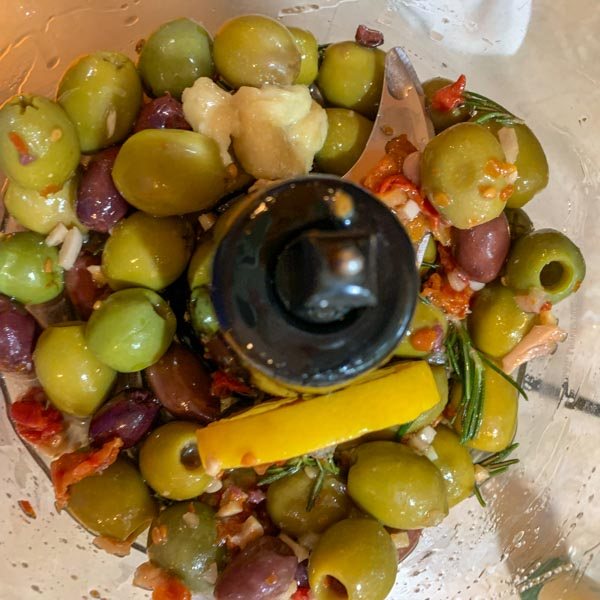 Pulse until evenly chopped. Scoop into a serving dish and surround with baguette slices. 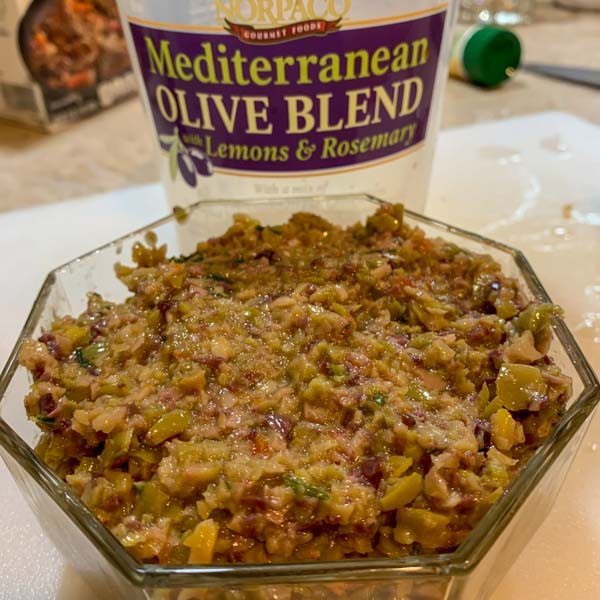 That is it. It makes a delicious briny, citrusy, herbaceous tapenade.

I needed Plum Sauce for my Short Ribs recipe for my dinner party. Ultimately, I went to six grocery stores in my area, and no one carried it. I looked up recipes to see how to make it and every recipe called for plum jam. Fortunately, I had just bought some plums at Costco for this purpose, so I was in luck.  I normally buy the plum jams below, but I have not been able to find these at any of my local grocery stores either. For this reason, I have resorted to making the jam myself. 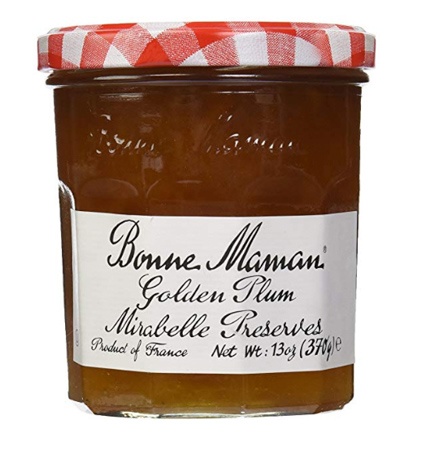 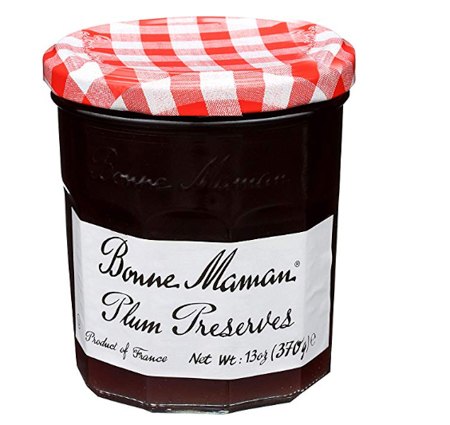 Costco seems to sell plums all year around. I have yet to find the time of year that you can get ripe, sweet juicy plums, so I never buy them to eat but make plum jam instead.  I made a mistake once of waiting for them to ripen on the counter and they just got moldy and gross.

So jam, it is, and it is so so good. Again is an unrecipe because it just is so easy. 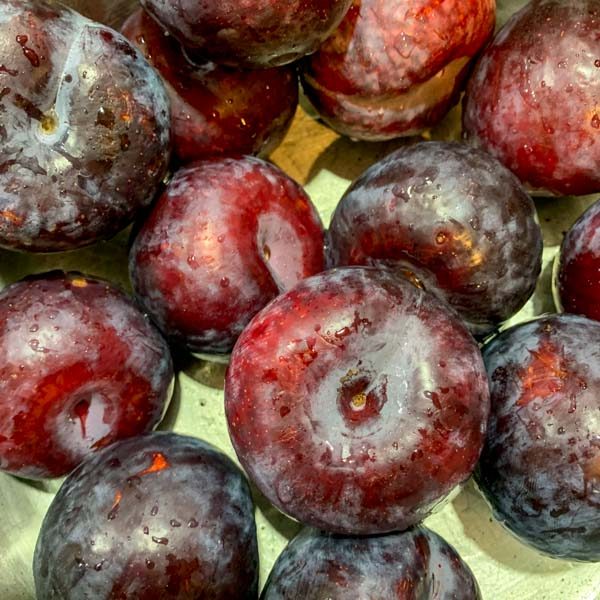 I had 13 plums. I washed them and cut into chunks with the skin on (that is what provides the deep red color). It is essential to eat one of the pieces to see how sweet the plums are. This way you can gauge how much sugar to add. Heat your Dutch oven to medium-high heat. 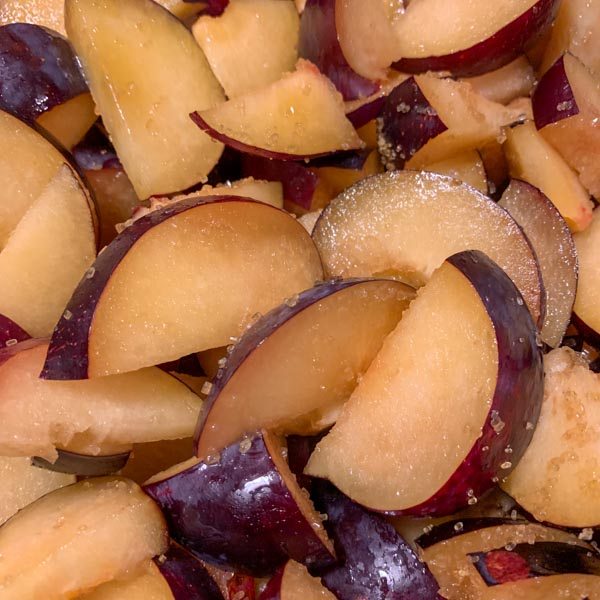 I melt about two tablespoons of butter in the pan. Unconventional, I know, but it works for me. Once the butter melted, I add the chopped plums. I give it a stir and then using a 1/2 cup of sugar sprinkle enough sugar to coat. (The picture above was just one-half cup. I ended up using a cup and a half.) Next, add a tablespoon of lemon juice. 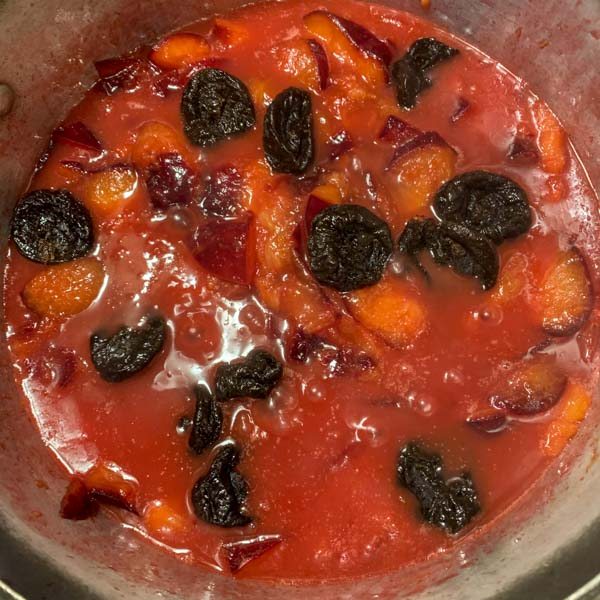 Monitor the heat, so it maintains a steady simmer. You can add a lid at this point. Stir once every 10 minutes until they were cooked down by about half. I gave it a taste. I wanted a richer plum flavor, so I added twelve prunes (plum raisins) and continued cooking. Adding the prunes is optional. At this point, I allowed the plums to simmer until I got the deep purple/red color and viscosity I was expecting.

At this point, I pulled out one cup of the jam for the ribs recipe. You can stop here if you do not want to make the spiced version. But if you do, add a teaspoon of pumpkin pie spice and a teaspoon of cinnamon. Blend with the jam and cover. Simmer for another 5 minutes. Turn off the heat and allow to steep for another 15 minutes.  Spoon into a jar or jars, seal. When completely cool, place in the refrigerator and use as you would any other jam.

I especially love this jam with slices of Gruyére cheese. 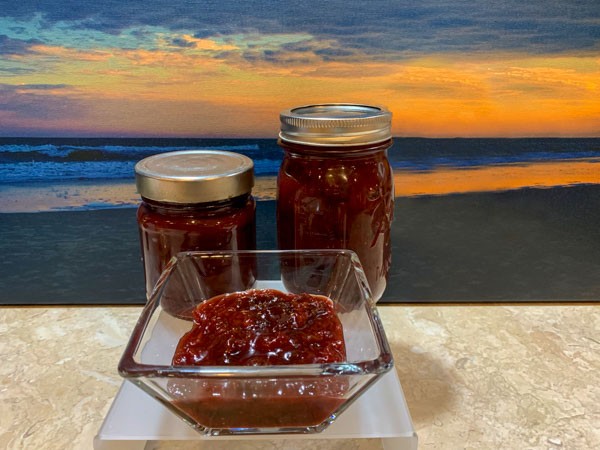 The mugs are on my website. And the t-shirts are on Amazon. 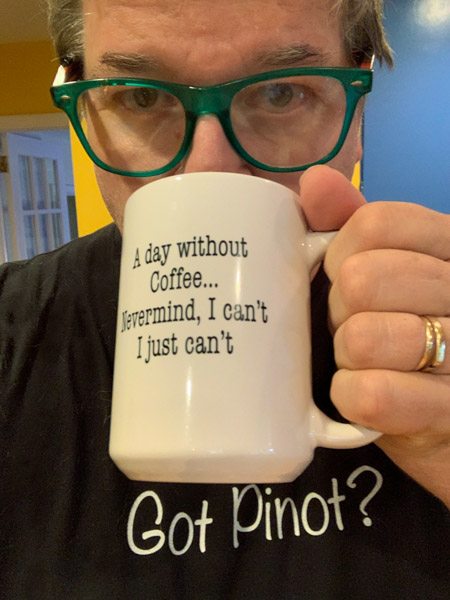