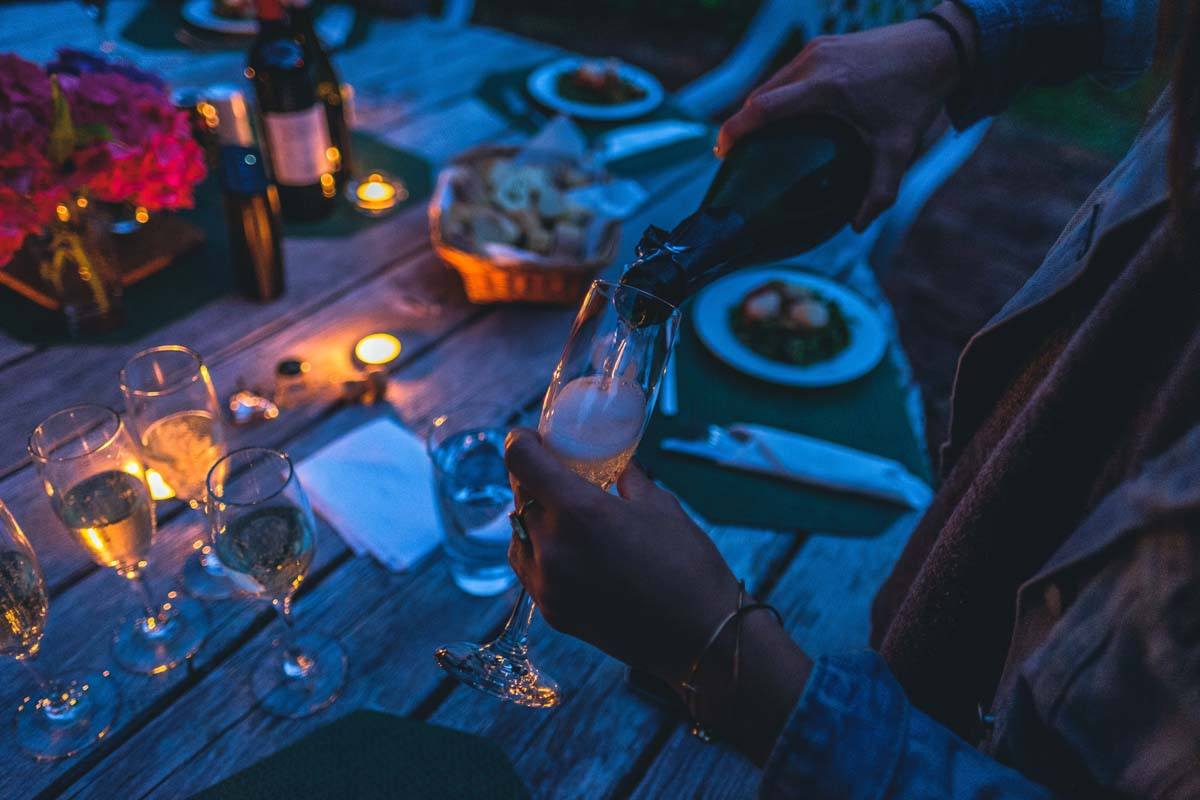 Side Note: This and That for the Weekend

It has been a whirlwind week. I can not believe that it is the weekend already. We had family in town, so we have been out and about most nights which was super fun. So for this post, I am calling it Side Note as I am piecing together various moments from the week.

The Indian dinner we had on Monday was flawless. The Chicken Tikka Masala was a huge hit. I also made an accompaniment called Raita which is to provide a “cooling” effect that tames the heat from some of the dishes. The recipe is below. I think you will love it. We grilled out twice this week, and I will be posting recipes from one of these dinners next week. But at that dinner, I also brought some cheeses. We Dean’s love our cheese and now that one of my sisters is lactose intolerant I wanted to find cheese even she could eat. I learned a ton and am excited to share what I learned below. I created a new, fun flavor of lemonade. Guzzling!!!. And lastly, I went DIY.  This NEVER happens, but I had an idea… Check out my new tchotchke shelves that I put up in the kitchen.

Riata is a yogurt based dish that is served with Indian food to cool the spice and heat in the food. There are several ways one can make it. Once again I blended a few types to provide the flavor profile I want. 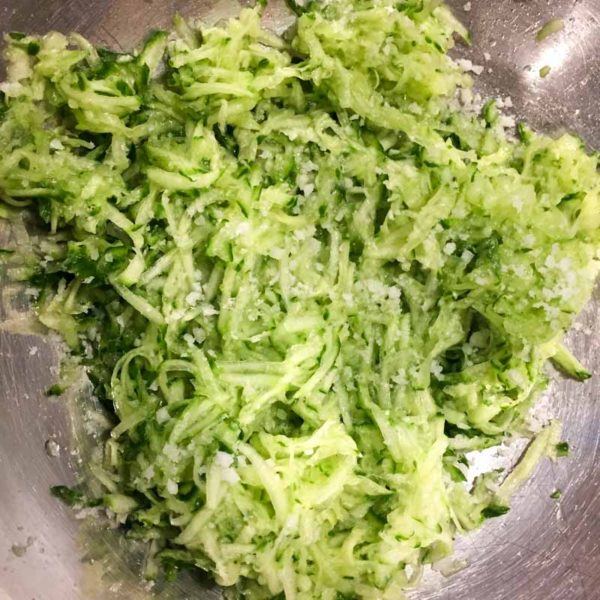 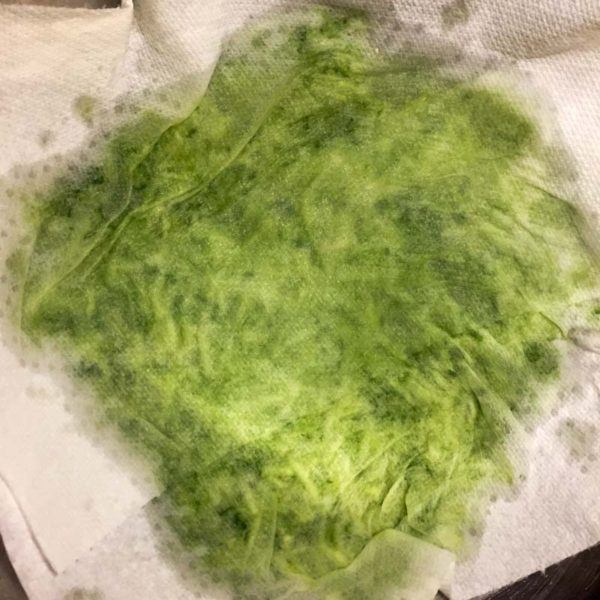 Add the yogurt, chopped cilantro, chopped mint and give a quick stir. Add the cumin and coriander and give it another quick stir blending the spices thoroughly. Lastly, add the juice from 1/2 a lemon and blend in the juice. 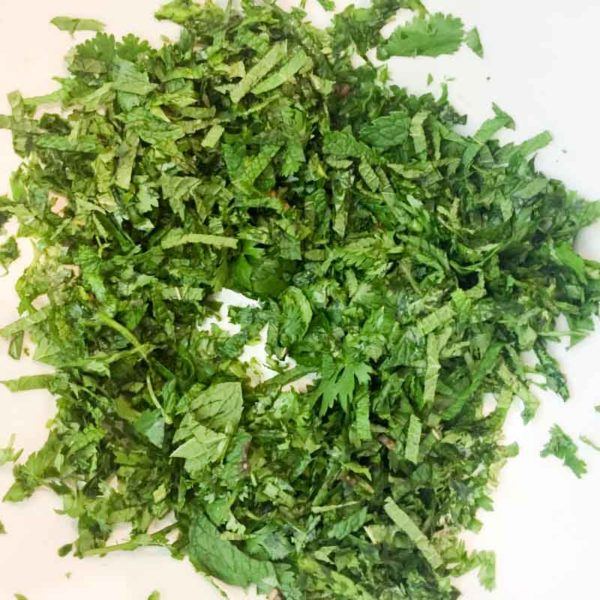 As a garnish, you can sprinkle a bit of ground cumin on with accent mint leaves or cilantro. Chill until time to eat. Should be made at least 3 hours before to give the flavors a chance to meld.

*I use the entire bunch of cilantro but 1/2 a bunch will also work.

Serve as an accompaniment with Indian foods. 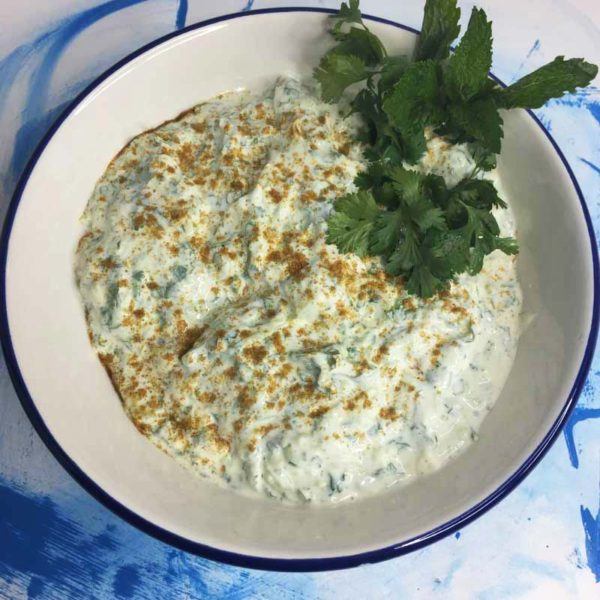 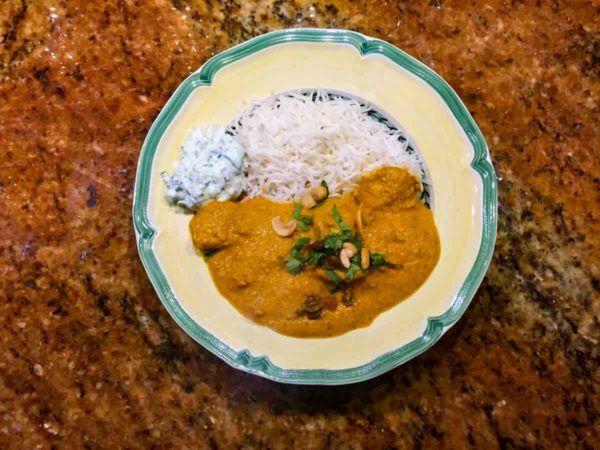 My trifecta epicurean nightmare is being lactose intolerant, gluten-sensitive, and have an alcohol allergy. Just put me out of my misery if I could not have bread, cheese, and wine. Or any of those individually for that matter! While no one in my family is stricken with all three that is not saying a whole lot.  Recently while buying some deli cheese, I learned that the Imported Swiss at Publix is lactose-free. I was super surprised. I bought some and made a mental note for the next time I was buying cheese for a family dinner party. 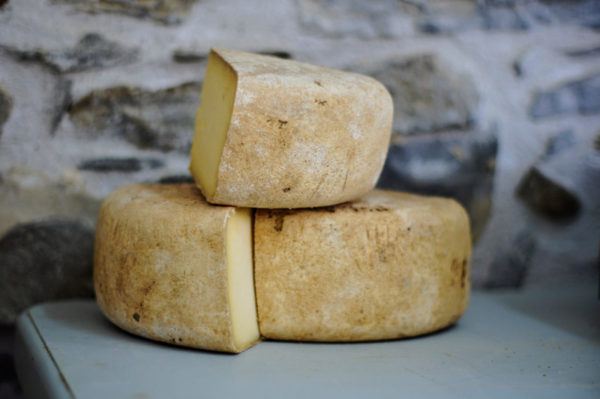 Thanks to Alexander Maasch for allowing me to use your image in this post.

One of our dinners this past week I decided to get some cheese and go to my fave fromagerie, goat.sheep.cow.north. (I know I blog about them all the time…. but they are a favorite place and have amazing cheeses. So I asked the cheesemonger if they had any lactose-free cheese. Her answer was unexpected, so I wanted to share it with you. This information is regarding hard cheeses only.

Disclaimer: If you are lactose-intolerant, please talk with your doctor before you eat any cheese.

This is what I learned

First, in cheese making, one separates the curd from the whey. Most of the lactose remains with the whey which is discarded. In turn, then most of the lactose is also discarded. Next, during the aging process the enzymes/bacteria that makes cheese what it is, eats the sugars to survive removing even more of the lactose from the cheese. The longer cheese ages, the more the lactose diminishes. Depending on the type of cheese trace amounts may remain but most folks will not be affected. She recommended eating cheese that has aged for at least 12 months.

Regarding packaged cheese at the store just look on the nutrition label. If there are zero grams of sugar, then there is minimal, traceable lactose.

Here is a great article in Prevention Magazine that makes additional suggestions.

Side Note: A New Infused Lemonade

Way back in February, I told you how I infuse fresh mint in my Costco bought Lemonade and how much I like it.  Since then I have experimented further. First I infused a small bunch of fresh basil, and that was amazing.  Not only did it give the lemonade the hint of basil but it also took away the sharpness of the citric acid making for a milder drink. I loved it. The next batch I infused both basil and mint. This was also very good. The mint ruled the roost, but the basil was always in the background.  Give it a try; I think you will love what it can do to this store-bought beverage.

The herbs are pushed all the way into the bottle and need to sit at least 12, but preferably 24 hours 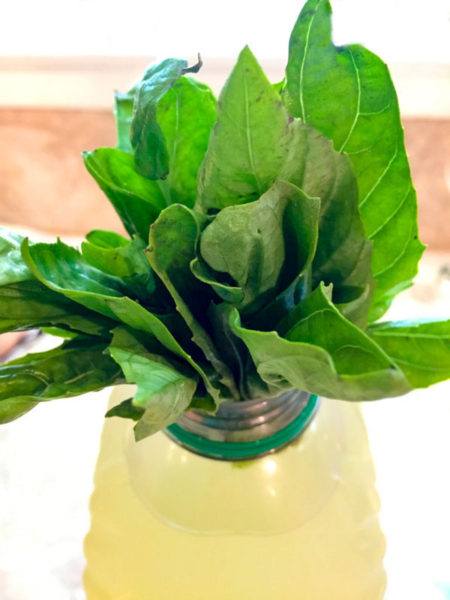 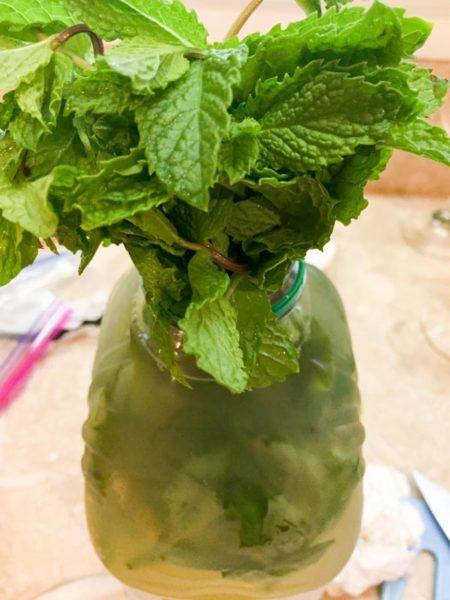 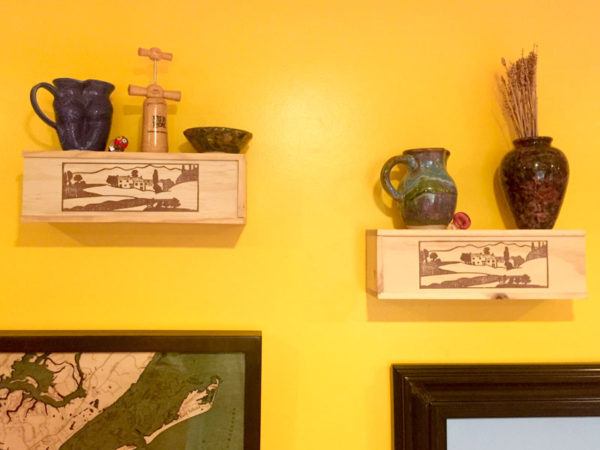 Gary and I are collectors of stuff from our worldly travels. Some are fine art, others are souvenirs, and some are just tchotchkes. There is so much that we have no place to put it all. On our summer of 2015 trip to France, we bought some super nice bottles of wine that came in singular wooden boxes. The wine has been gone a while, but the boxes since they were emblazoned with the winery logo sat on top of the refrigerator. Then as we were hanging some new art in the kitchen, I had an idea. What if I get “L” brackets and mount the boxes to the wall. The box I would classify as a tchotchke, but then it became a shelf that now holds objects that are near and dear to us. 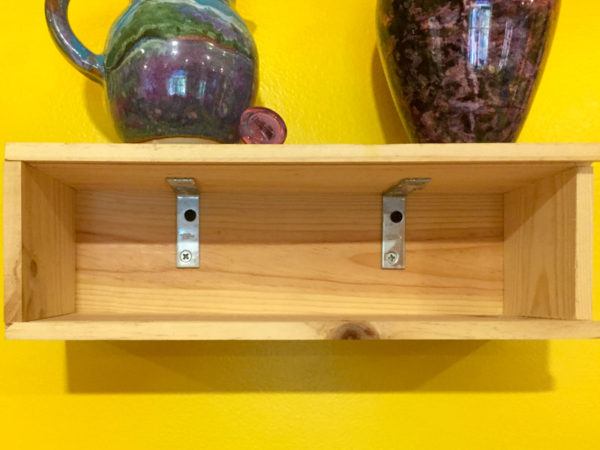 I superglued the “L” bracket to the inside top of the box. This way it will stay secure without screw holes on the top.  Once dried they were mounted to the wall I slid the lid back onto the front and done!  I love the way I see the boxes now as well as the objects that now have a home. 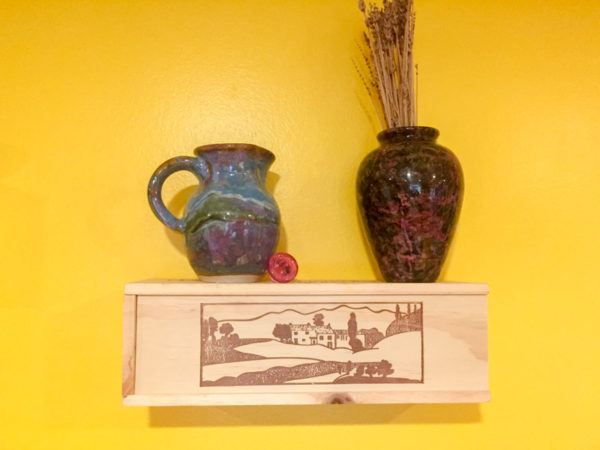 I hope you enjoyed this Side Note and until next time… 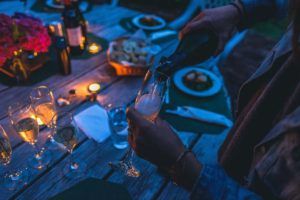 Thanks to Dave Lastovskiy for allowing me to use your image to feature on this post.