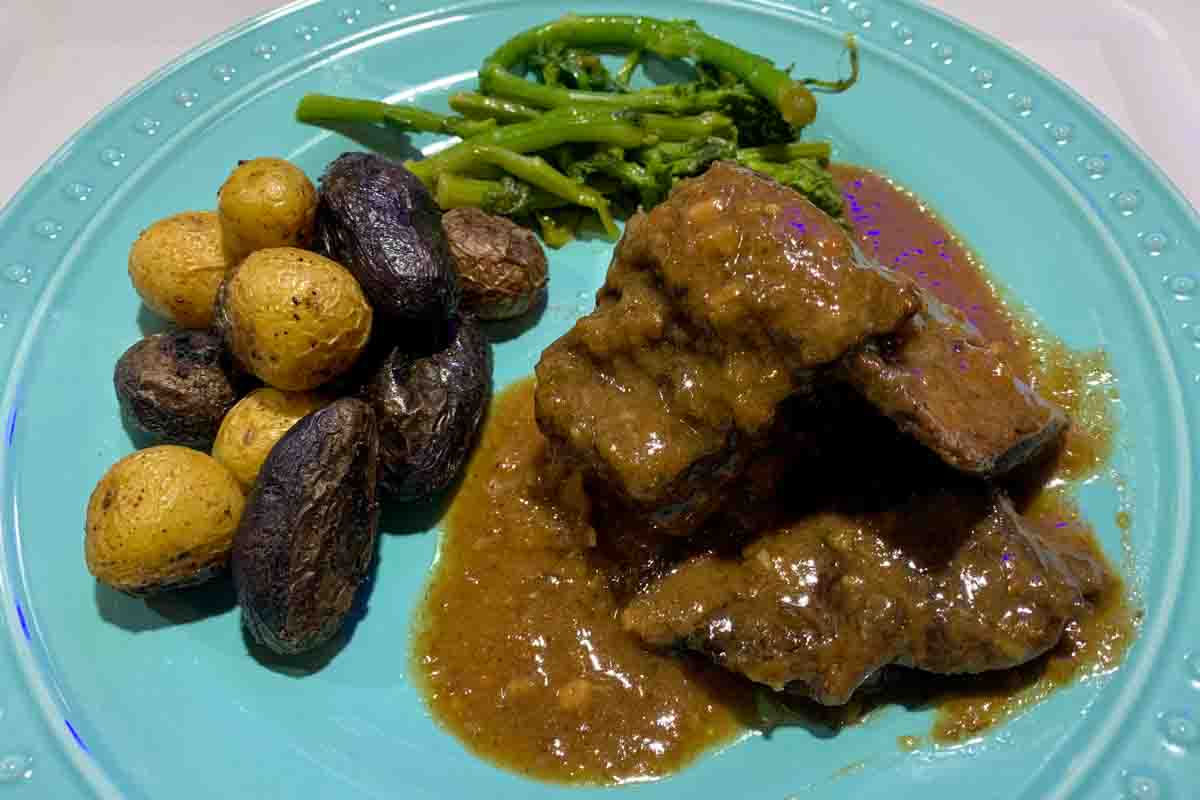 I had gone back and forth on whether or not I should post the incredibly delicious short ribs that are based on a Marcus Samuelsson recipe that he prepared for President Obama about eight years ago. They were the main course at a dinner party we had. The reason for this debate is because there was a 5-hour power outage during the day that delayed EVERYTHING. (Yes, I have an electric stove.) The power came back on two hours before dinner was to be served, and an hour before the guests arrived. And did I mention that the short ribs needed to cook for at least two hours and they were not yet seared?

I thought about canceling the dinner, but my guests were game for anything because it had been so long since we all were together. So much so that they said they were fine with takeout pizza if need be. So I persevered. The guests arrive on time with lots of really great wine. My appetizer was a cheese and charcuterie board. I thought we would be fine. Perhaps dinner would be a tad behind schedule, but I had it all under a modicum of control. I thought. Then thirty to forty minutes into the party and the power goes out again; the short ribs need to cook for at least another hour at 325º F., and the power stays off for another 40-45 minutes.

Pizza is brought up again, but we chose to wait and see. It was not like anyone had to go to work in the morning.

It should probably be mentioned that even under the most ideal circumstances, I make a mess when I cook. When stressed? There is no doubt that pans and bowls would be flying and everyone needed to stay out of the kitchen. And NO ONE was to open the oven door.

Short Ribs – Allow me to explain

Ok, this is how you know that I am losing it as I cook. Besides not having many pictures of the process, the ones I do have are, well, not that great.  I was so focused that my guests thought I was upset because I was so quiet. But there was so much to do and the utility company was not helping. I just wanted to eat before midnight, so pictures and maintaining order became an afterthought. Periodically, I did look up and smile, and they kept my wine glass full so I was good.

I should also point out that this recipe was doubled for my dinner. With the short ribs, I used six bone-in short ribs and eight boneless short ribs as I wanted the fat and the marrow from the bone-in to flavor the entire dish.

I also made this same dish with chicken for the non-beef eaters in the group. Now, this was my choice because I could have made a pork or chicken dish that everyone wanted to eat. But I love beef and never get to make it. Gary encouraged me to do so, and he is one of the non-beef eaters.

All I can say is trust thyself and make this incredible dish. Without power outages, it should be fairly easy and straightforward.

Heat oven to 325 degrees. Pat meat dry with paper towels and season all over with salt and pepper.

Heat 2 tablespoons of the Grapeseed oil in a large Dutch oven over medium-high heat. When oil shimmers, add short ribs and brown on all sides, about 2 minutes per side; transfer to a plate. Add the additional oil when needed. 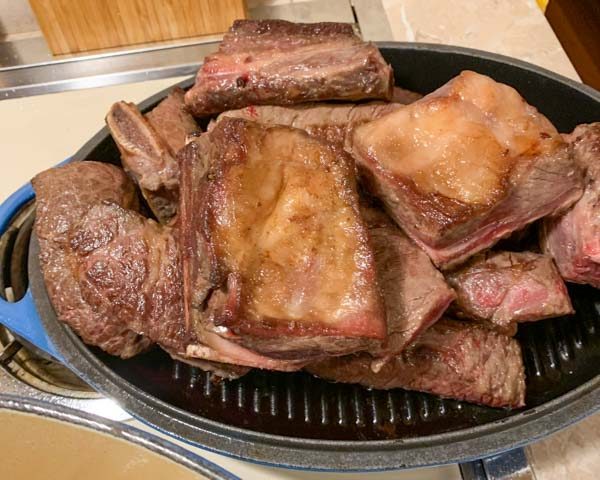 Add onion, carrot, celery, lemongrass, garlic, and ginger to the pot. Season with salt and cook, and keep stirring, until onion softens about 5 minutes. 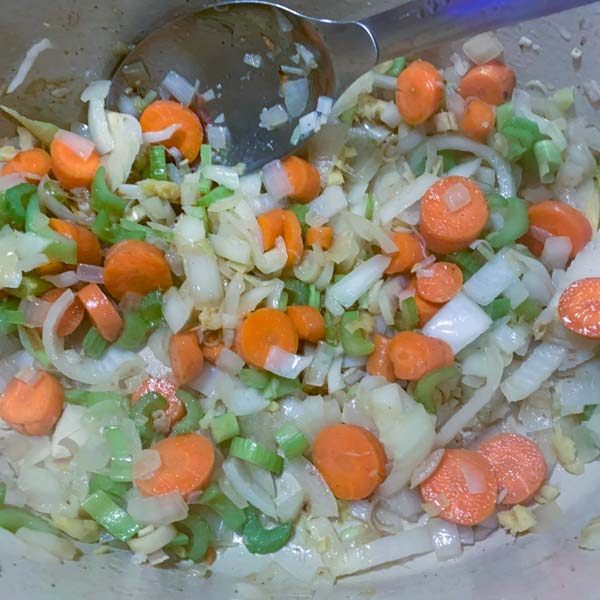 Pour in wine and cook, stirring to dissolve any of the brown bits that may still be on the bottom of the pot. Add broth, plum sauce*, soy sauce, thyme, parsley, and bay leaves and bring to a simmer.

Return short ribs to pot, along with any juices, cover and slide pot into the oven. Braise until meat is fork-tender, about 2 hours.

Discard bay leaves and thyme stems and transfer vegetables to a food processor. Process vegetables until smooth, then add 1 1/2 cups of the defatted braising liquid to the processor and pulse to combine.

Return sauce to Dutch oven and season to taste with salt and pepper. Add short ribs and turn to coat in the sauce.

They are ready to serve.

If you made them earlier in the day, do a slow reheat in the oven before you serve.

Extra sauce should be available at the table, along with a bowl of freshly grated horseradish. 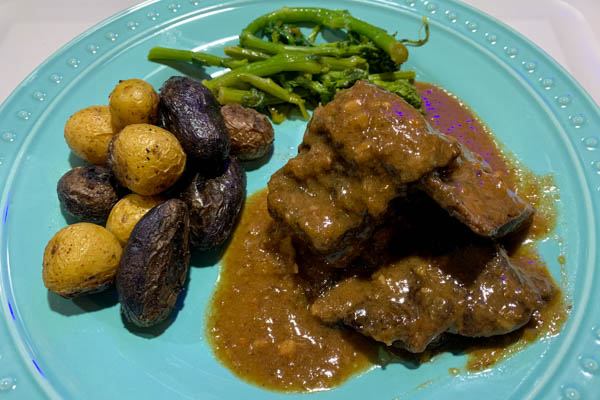 The wine that the guests brought for dinner was truly an exceptional selection. 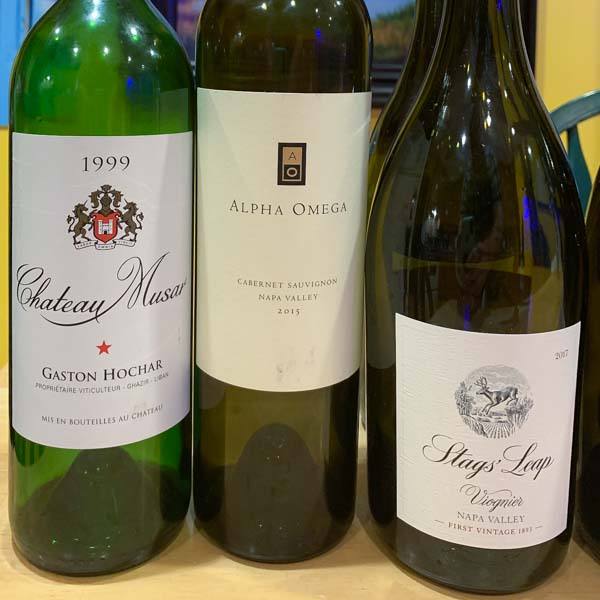 From left to right:

1999 Chateau Musar Red – A beautifully aged blend of Cabernet Sauvignon, Cinsault and Carignan from the premier winemaker in Lebanon. My sister picked this up at the Edmund’s Oast Chateau Musar Wine Dinner that I blogged about here.

2017 Stags’ Leap Viognier, Napa Valley. I tasted this wine when in Napa in May of 2018. I loved it and as thrilled that only half my guests wanted to partake in the two bottles that were brought to share. 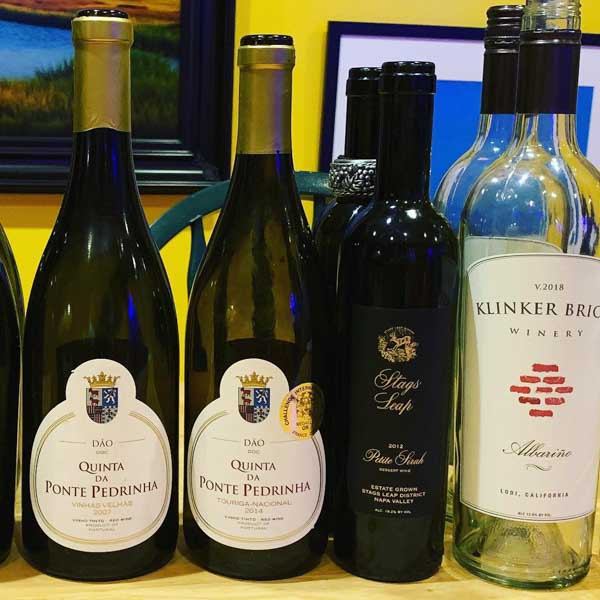 From left to right:

2012 Stags’ Leap Petit Syrah Dessert Wine, Napa Valley was an extra special treat. Stags’ Leap led the way in the early years of winemaking in Napa by focusing on Petit Syrah production. That has since changed, but this dessert wine is a reminder of how exceptional Petit Syrah can be.

2018 Klinker Brick Albariño, Lodi. This wine was purchased at the Klinker Brick wine dinner at Edison’s and has become one of Gary’s “go to” wines. As he is not a fan of the Viognier varietal, he poured this wine for himself and a couple of others. (which was fine by me!)

That is all for now!