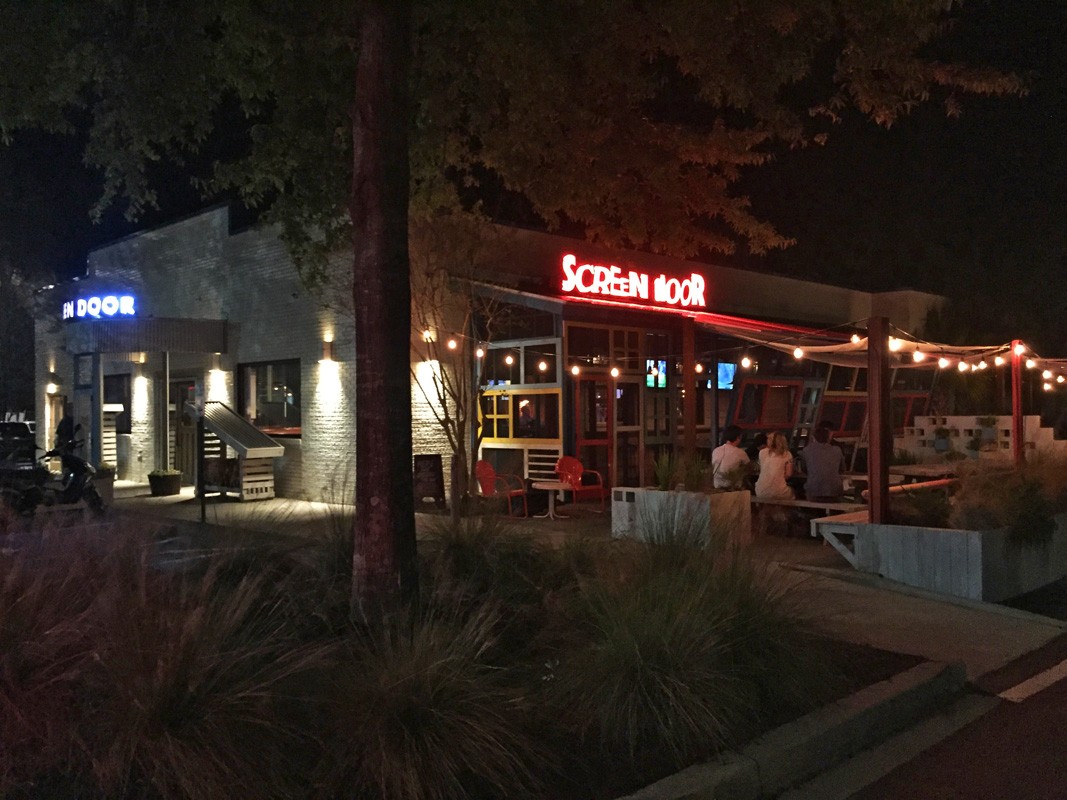 Charleston is a food town. There is no doubt about that.  Even Eater, the national restaurant blog has its own Charleston imprint.  All of their other  “Eater cities” have at least a half a million residents or more.  Charleston stands alone in their stable with under 150 thousand residents.  I think that says alot about Charleston and the food scene we get to enjoy. Every month there are more restaurants coming onto the scene hoping for a piece of the pie from the thousands of tourists that flock to our hamlet. When you dine downtown you expect to pay tourist prices.  It is super easy to spend $100.00 per person on a dinner out in downtown Charleston without even trying.  Spending $50 per person or less is much harder to do and as a local who does not frequent chain restaurants that makes the choices fewer and fewer.

Recently, Gary and I joined our friends, Bryan, Craig and Natalie at Screen Door on James Island.  Head down Folly Rd towards Folly Beach and just before Fort Johnson Rd on the right hand side in the parking lot of a strip mall you will find Screen Door.  This property was probably an Applebee’s or other chain in several different iterations but now it is Screen Door and I am confident it will be a part of our community for years to come.  Brian, Craig and Gary had all been there before for brunch but it was my first time. Natalie’s too.  It was the boyz (that is how I refer to Bryan and Craig) idea to go to Screen Porch for a burger and a beer.  Heck, why not.

We started with beer.  Wine selection is basically “red or white” (that may be oversimplified for a wine snob like me).  So beer it is.  I guess that is why Bryan said “burger and a beer”.  When it comes to beer I have no idea what any of the “beer terms” mean and how that relates to taste – IPA, Hoppy, Belgian White, Malt, Wheat, Ale, Lager, etc. so I asked for what I normally ask for…. “I’ll take something amber”.

Nothing really fit the bill, so I chose a Cherry Wheat beer.  I do not get excited about beer so all I can say is, I liked it and I ordered a second.  Bryan and Craig were thrilled with their selection and Gary was beside himself because they carry this Kentucky Bourbon barrel beer that he loves.  Beer aged in a bourbon barrel… whatever…. he loves it.  Natalie not being a beer drinker went with a dirty Grey Goose Martini.

Thirst is quenched. Next.

At the shift manager’s suggestion we ordered the Fried Pickles and the Brussel Sprouts as our appetizers.  “The Best Brussels Sprouts Ever” are tossed in a Ginger Soy Glaze, served with Sriracha Aioli and toasted sesame seeds.  They really are spectacular and we ate every last one and wanted more!  The “Country Fried Housemade Pickles” served with a Spicy Ranch and a Horseradish Cream dipping sauces was also amazing.  The breading is crisp and crunchy and held up wonderfully to the sauces which were both delicious. 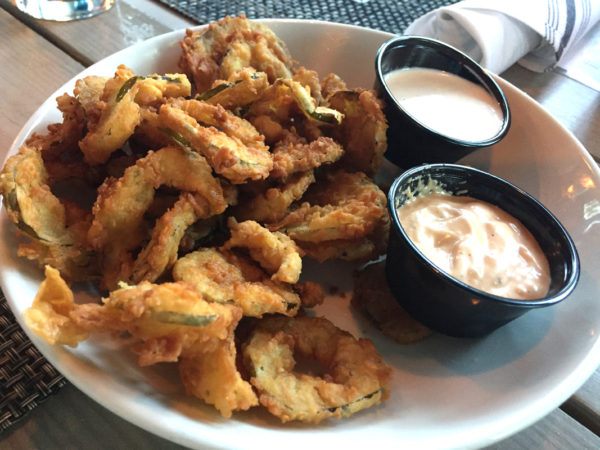 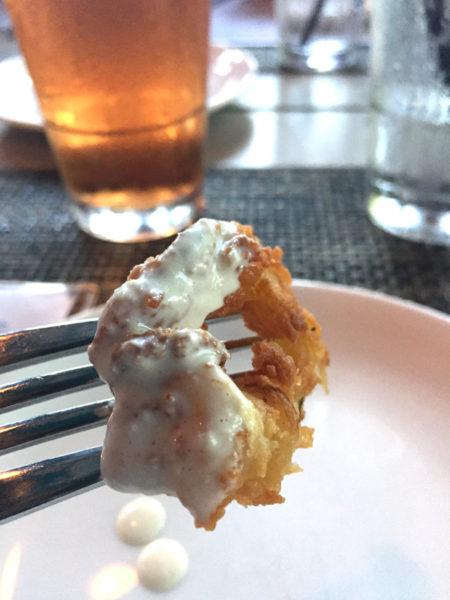 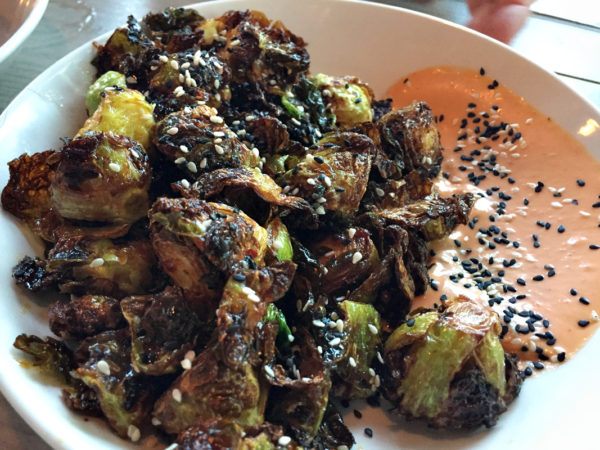 Their menu stands out for two reasons.  One is for the variety and the other is the main course average price is $13-$14 and the most expensive is $17.00.  Score!

I ordered the Classic Steak Frites which is a 12 oz wood-fired Ribeye Steak with Rosemary Chive Butter and Parmesan Garlic French Fries.  I love a classic french steak frite and it is impossible to tell you when the last time outside of Paris that I had a great one.  Until now….  It was incredible.  Tender and juicy with the perfect amount of char and crispy edge fat.  The steak melts in my mouth as a devoured every last morsel.  The fries were excellent as well.  Man it will be hard to try anything else on the menu, I loved this so much.

I asked for malt vinegar for my fries and when I accidently picked up my beer instead of the vinegar and poured my beer on my fries.  They were on it and had replacement fries on a new plate in no time. (Don’t ask me how that happened, I have no idea.  But it got quite a laugh at our table.) 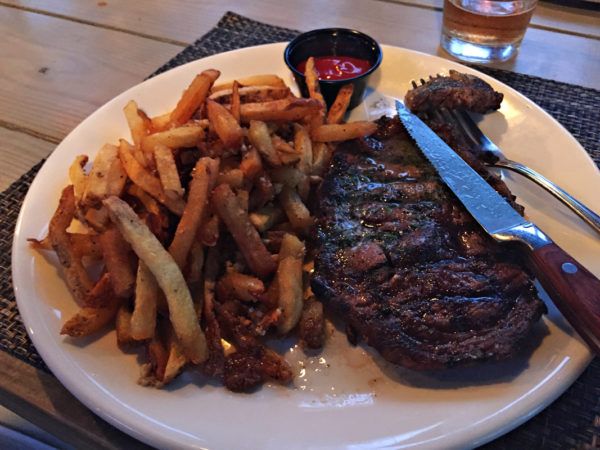 Gary and Natalie each ordered a wood-fired pizza.  Gary, the Chicken Bacon Ranch Pizza and Natalie, The True Margherita.  Both thought the pizza was “just ok”.  Neither were over the moon like me.   It may be just me, but I would not order pizza except at an Italian restaurant or one that specializes in pizza.   I am also a traditionalist so a Chicken Bacon Ranch would never be on my radar and The True Margherita having both fresh tomato slices (but not Roma tomatoes) and tomato sauce is redundant.  In my mind a margherita is an either/or on the tomato choice and if fresh slices only Roma tomatoes, but that just be me.

Bryan ordered the Screen Door Classic Burger (hold the tomato) with Fries.  The burger is a 1/2 pound so it is a mountain of a meal on a fresh roll.  I will definitely try a burger one day, if I grow tired of the steak (doubt it). 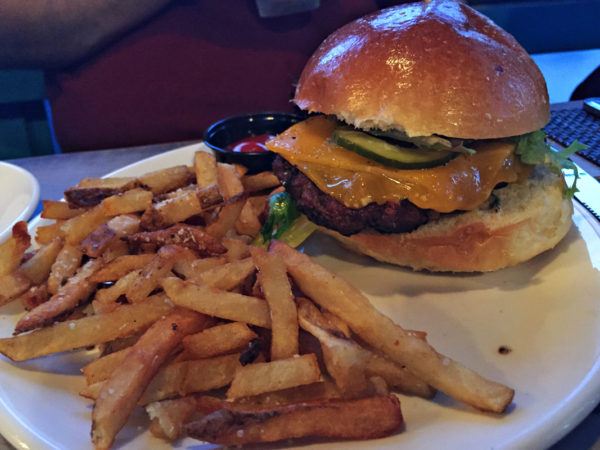 And lastly Craig went for the Crispy Flounder and South Carolina Shrimp Platter with Fries and slaw.  Craig reported to me that he would order this again but only when not ordering appetizers because it was so much food.  The fish was light, flakey and delicious.  And your eyes are not deceiving you, the two pieces of fish were huge.  The shrimp is lightly battered and perfectly crisp. 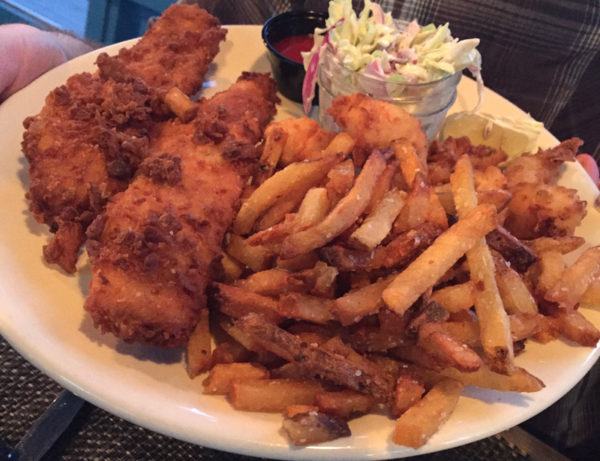 The server has attentive and personable.  When I made a mess she fixed it without questions.  The shift manager also came by several times to make sure we were being well taken care of.  I will definitely make this a regular dinner spot.  It is casual, affordable, friendly with local ownership.  Most important the food is good. 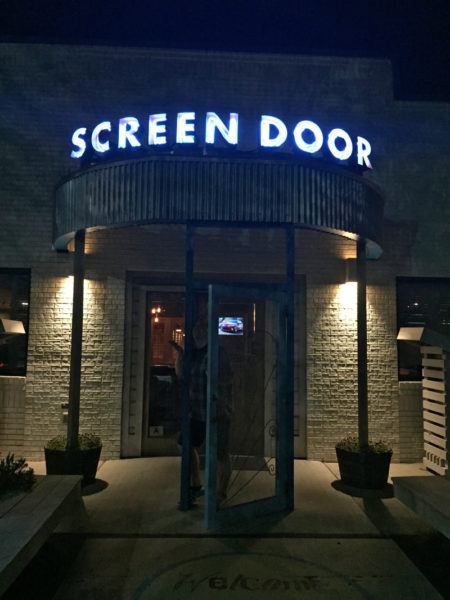 Hours are 11am to 9pm Sunday through Thursday and until 10pm on Friday and Saturday.