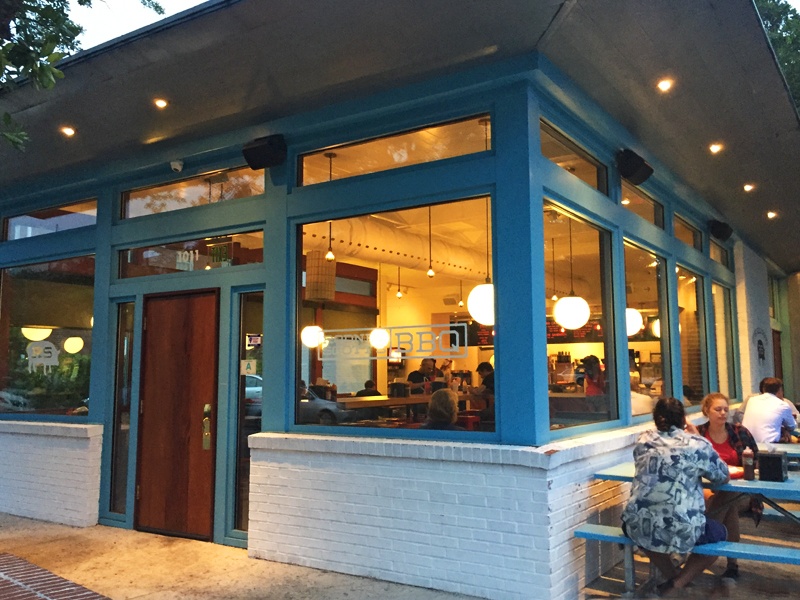 I have been reading about the Scott Family and their whole hog BBQ pits in Hemmingway for years.  When I learned that Pitmaster Rodney was opening Rodney Scott’s Whole Hog BBQ in Charleston, I was ecstatic.  Being a huge BBQ fan, I was thrilled that the legendary pitmaster would be serving it up a mere 15 minutes from home.  While it opened in February, I gave them some time to get their sea legs but the wait was over last Tuesday, and I just have to tell you about the experience.

Place your order at the counter and grab your drink.  You will get a number for your table, and the friendly staff will bring your meal to you when it’s ready. Keisha worked the register that night, and she is an absolute delight.  Very helpful and always wearing a big smile.  I thought she looks like a famous character actress that has been on stage and screen and when I mentioned it, she got a bit embarrassed and said she gets that a lot.  I am not gonna tell you who the actress is; you need to figure that one out on your own.  But she and I bonded, and I will look forward to seeing her whenever I visit again.

Party of Three or Six?

We were a party of three, but I ordered for six because I wanted to try as much as I could this first visit. The only entree I did not try was the rib eye sandwich as there was just no more room.  All three of us ordered the Whole Hog BBQ Plate with two sides ($13.50).  We ran the board on the sides ordering the Fresh-Cut Fries, Greens, Cole Slaw, Mac & Cheese, Potato Salad and Baked Beans. (that’s six – we each got two, but we all shared)  We also ordered a serving of cornbread to share. The additional entrees were the chicken and the catfish. I ordered a “sandwich” with no sides and no bun (not on the menu but Keisha hooked me up).  After all this, I got to sample a spare rib and hallelujah – hush puppies came with my catfish.  Finally, as if we had any more room in our bellies, we ordered a Banana Puddin’ to share.  I needed a wheel barrel to get me out of there.

Please note that this was not a pre-arranged visit nor did they know I would be blogging about my experience.  I wanted my experience to mirror what any customers would be.

Rodney’s Whole Hog BBQ (aka pulled pork) is delicious, and I ate every bite.  The Rodney Sauce is a vinegar-based sauce, and I love vinegar, so it was a perfect sauce for me.  The “Other Sauce” (read the bottle) is a thick, sweet & spicy sauce that I also liked.  Actually, I mixed the two of them together, and that was awesome.  His pulled pork is tender and succulent albeit a tad lukewarm for my liking. (After the fact, Keisha later told me I should have told her.) But I had no trouble eating every morsel on my tray.  The pork is his claim to fame, and it is worth the trip, but there is so much more on the menu that you have to try so mix it up at your table and everybody share. 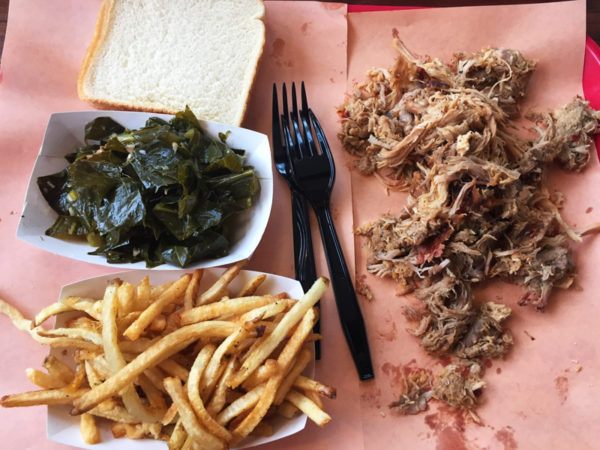 The rest of the menu

The Pit Cooked BBQ Chicken was excellent, but it has a lot of spice. Have plenty of beer on hand to put out the fire in your mouth.  The Fried Catfish is THE BEST FRIED FISH in Charleston (that I have tried so far).  OMG, I felt like a kid again eating that fish as it is breaded the way my dad would do it when he caught then cooked catfish.  I will be making a return trip just for the catfish again and again.  The come from behind surprise was the BBQ Spare Ribs.  I only had one rib to taste, and it was mouthwatering and so incredibly tender.  I can not give a full report on the ribs but there will be another visit, and the ribs will have to fight with the catfish to see what I order.

My favorite of all the side dishes were the Baked Beans and the Greens. My sister can make some mean collard greens, and hers will always reign supreme by me, but these are a solid runner-up. Another favorite is the cornbread.  Cornbread needs to be that perfect balance between sweet and savory AND in all circumstances be buttery and moist. A cornbread nightmare is when you take a bite, and the c’bread soaks every ounce of moisture out of your mouth because it is drier than the Mohave desert.  Rodney hit the nail on the head with his cornbread. Damn! That will be a side on any plate I get.

Lastly, the only dessert he sells is Banana Puddin’.  For the record, I do not typically eat pudding of any kind. And I NEVER eat any food with soggy anything in it. (it is a texture thing, and I think it’s gross!)  All that said, I LOVED this banana puddin’.  The texture was more custardy than pudding, the banana tasted fresh, and there were no soggy cookies anywhere to be found.  The whipped cream on top is homemade, and the entire dessert had that perfect level of sweetness. (meaning not too sweet!). I was so surprised as was my sister. Sorry, there is no picture of the puddin’. We had eaten it before I remembered.

They serve soft drinks, iced tea, and beer and wine.  I can not imagine drinking wine with BBQ, so I went with beer.

Rodney Scott’s Whole Hog BBQ is located on Upper-Upper King at 1011 King Street, the place is much smaller than I expected but there is plenty of seating indoors and out along the side of the building.  Street parking was easy the evening that I was there as there is no parking lot.

There is lots of great BBQ in Charleston, but Rodney Scott’s Whole Hog BBQ must be part of your rotation.

Stopped at @christophe_chocolatier for much needed

Do you see what I see? A sign of better days ahea

We finished Gary's birthday celebration with this