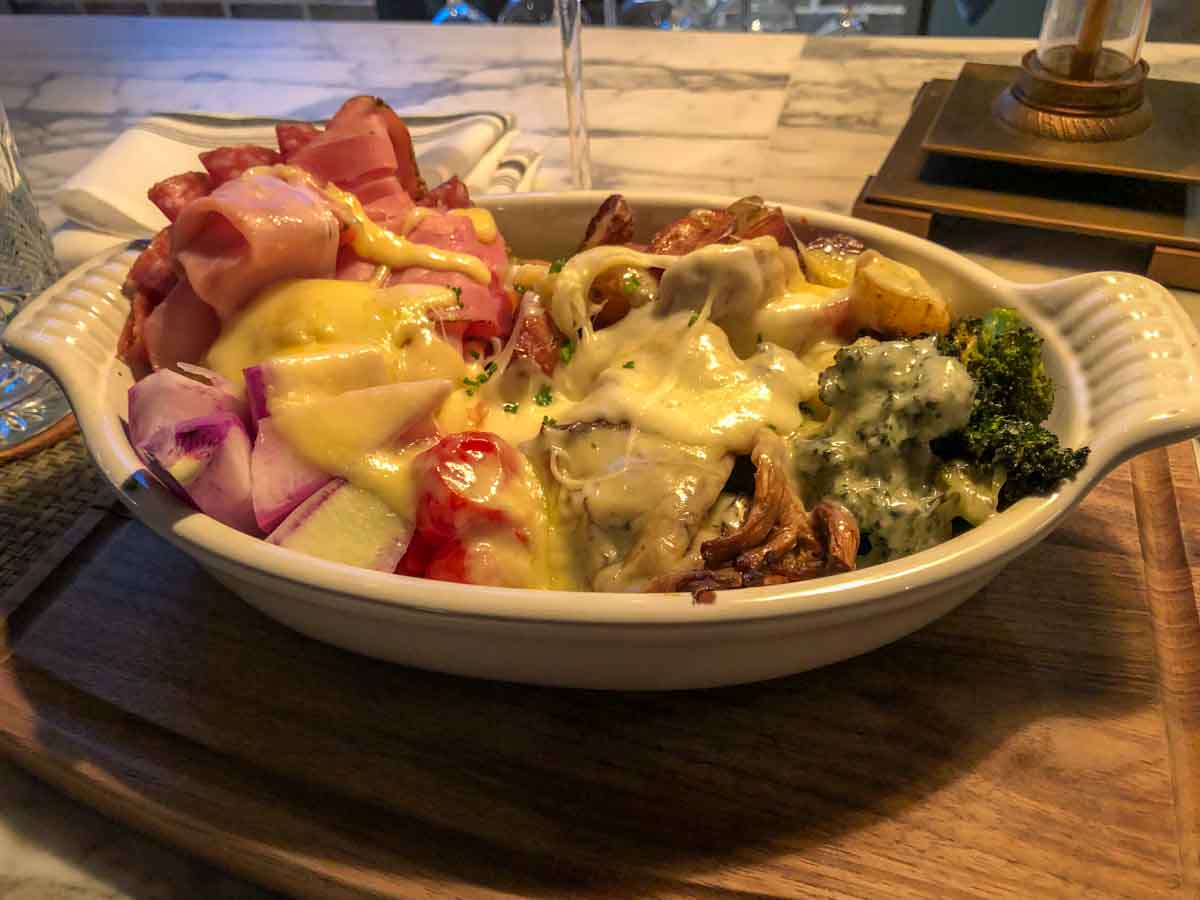 Wow, looking at the title of this post it definitely has a European vibe. Raclette from France/Switzerland, Fish & Chips from the UK, an Italian wine from a California winemaker, and finally dreams of living in Italy.  I am not going to dilly dally, let’s get right to it. What one minute, did I say Raclette? Well, I sure did, so let’s start there with an incredible dinner.

Before my decision to give much less attention to Facebook, I saw a post from my friends at goat.sheep.cow.north about a Sunday afternoon Raclette Dinner. Now if you are unfamiliar with Raclette and Raclette dinners allow me to explain. Raclette is a semi-hard cheese made on both sides of the French and Swiss Alps. It is made using ancestral methods with unpasteurized milk of cows grazing on the alpine meadows. 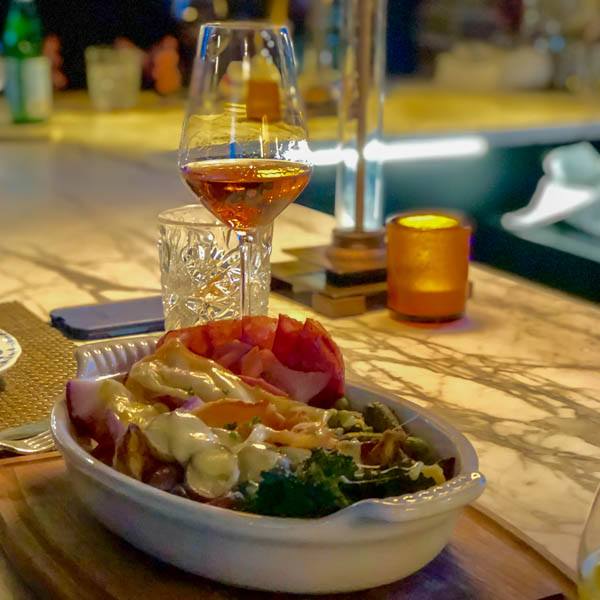 Raclette Dinners are similar to fondue in that you melt the cheese and eat with bread, cured meats, and roasted vegetables. But that is where the similarities end. Fondue blends melted Gruyére and Emmentaler cheeses in a pot with garlic, white wine, kirsch, cornstarch, lemon juice, black pepper, and nutmeg. While still very cheesy the additional ingredients make it a smoother sauce-like texture. Raclette is a half a wheel of said cheese heated using an Electric Raclette Grill or Broiler that melt the cheese. You could go old school and use an open fire, but I digress. As it melts, it is scraped off the wheel into your bowl or plate over your chosen accompaniments. In Switzerland and France, it may be done tableside, but that was not the case here.

Gary and one of my sister’s joined me for this experience, and it was so much fun. This was goat.sheep.cow.north’s third Raclette event and I hope they plan to do more because it was a fun and unique dining experience. You could order a half portion ($16) or a full portion ($28). We ordered two full portions, and if we had not started with a soup or salad that would have been perfect, so I took home some leftovers that I ate the next day. We enjoyed our dinner with Domaine Cyr 2017 La Galoche Beaujolais Rosé with was the perfect pairing since the Swiss Fendant had been sold out.

If you love cheese, you need to get on their mailing list, so you know when the next dinner will be held. It has become a popular event so arrive early or expect to wait for a table. 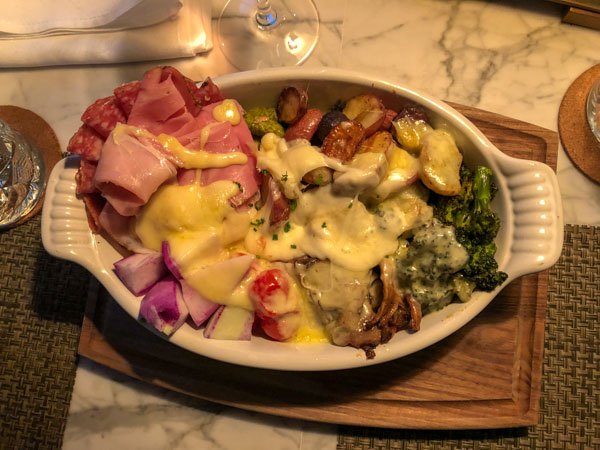 Next Stop, England via West Ashely for Fish & Chips

I have been craving Authentic Fish & Chips for what seems like an eternity. Now truth be told there is a joint in North Charleston in the Park Circle area called The Codfather that gets raved reviews. But I never went there because I rarely get to that part of town. It is not like I am running errands by there, so it seems so “out of the way.” Then I saw a post on Instagram that a new Fish & Chips joint, A Salt ‘n Battered, was opening in West Ashley. And yes, it is on a road I drive at least once a week, so I had to check it out. 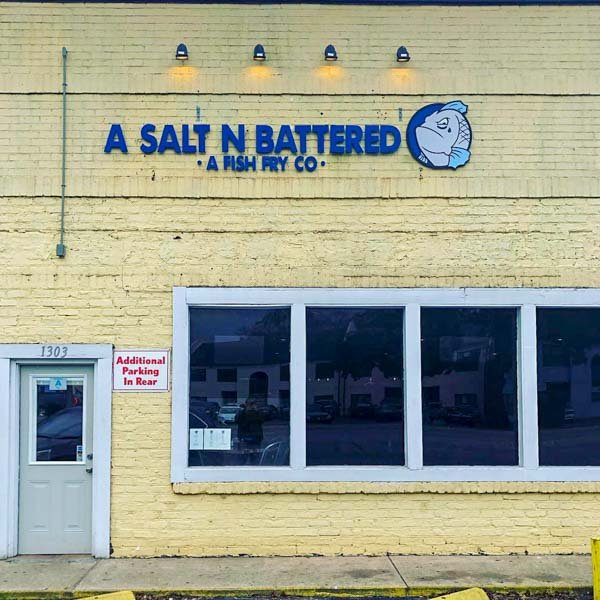 I stopped for lunch the first week that they were open. The exterior is painted yellow brick, and while there is a sign, it gets lost on all the brick. But it is in that old multi-colored brick strip mall next to Home Team BBQ with plenty of parking out front as well as behind the mall. The inside has a nondescript sports bar vibe with several flat-screen TVs on the walls. But I did not go there for decor; I went for the Fish & Chips. Well actually, I went there for the fish. Chips aka french fries are sold everywhere, so those mattered less to me than the fish. 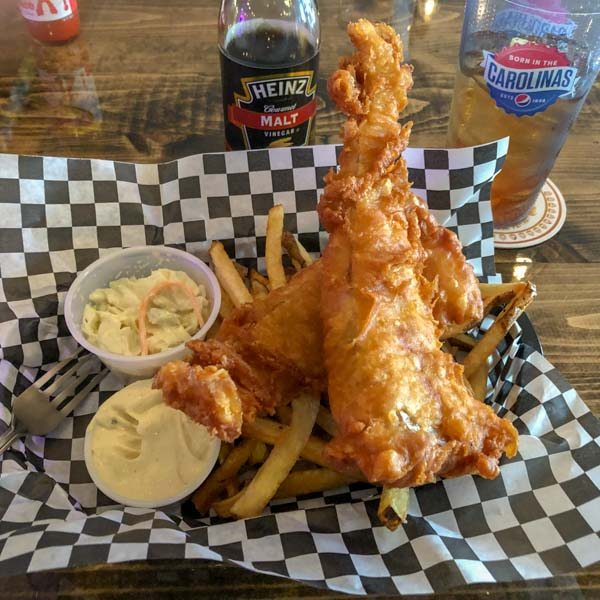 I sat at the bar with my back to the TVs (sports are not my thing) and placed my order. You can have anything you want, as long as it is FISH & CHIPS because that is what they sell along with Mushy Peas as a side and Gravy to dip. There is a kids Chicken Finger basket for the little guys/gals, but that is it. And as far as I am concerned, that is fine by me. The fish (cod) was fried to perfection and delicious. The mushy peas, a classic British accompaniment, were perfect. I thought the chips were good but not special and the malt vinegar is from Heinz. I wish they would get imported British malt vinegar. In my opinion, it has a bigger punch. 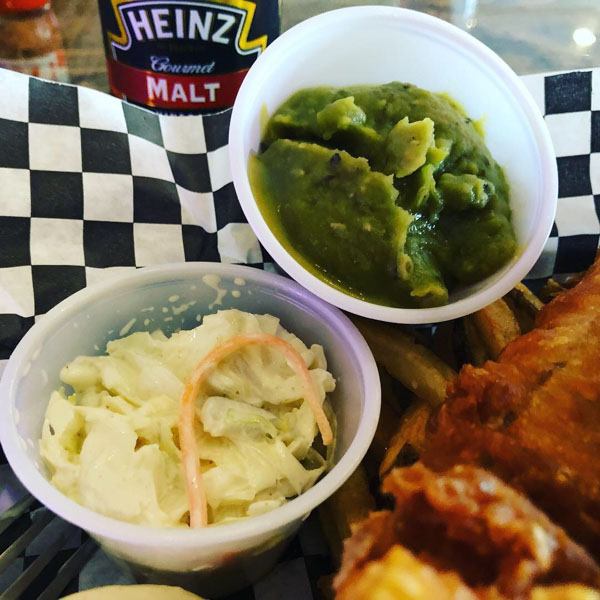 But I went for the fish, and I was incredibly happy. It is just what I have been craving so I will definitely be back. The dill mayo (what we call tartar sauce) was an English version and “Out. Of. This. World!” I could eat that by the spoon.

So if you get a craving for authentic fish & chips and your heading toward West Ashley. Stop in for a bite. There are no British accents, but the fish is killer!

At the end of 2018, I put Luna Vineyards 2016 Pinot Grigio in my top four wines of the year. Recently, I shared a different Luna Vineyards wine with friends. And now begins the shuffle for 2019 favorites because this one is stellar. I picked this wine to drink because I thought it would match my friends’ palate preferences. They like medium-bodied reds that are full of flavor and ready to drink. I was hoping my memory served me well from the tasting last May while in Napa, and that this wine would hit the spot.

“San-joe” as I call it is a great cocktail wine but also a great pizza and pasta wine. This wine was great at both jobs as we started it before dinner and finished it with pizza. 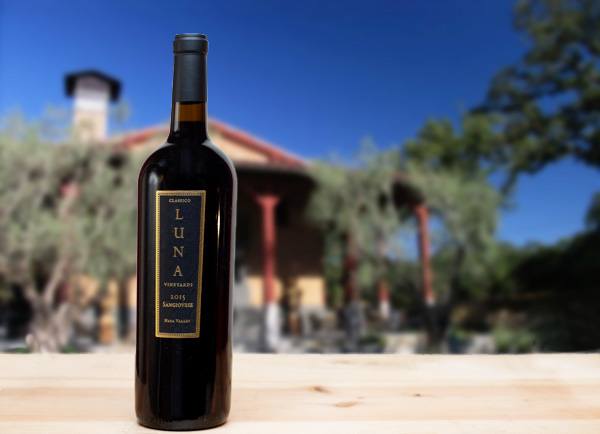 Huge! The aromas are huge, plentiful and crystal clear. The first whiff was milk chocolate and sweet cherry. I could leave my nose in this glass all night. Subsequently, came blackberry and marzipan. I was so in love, and I have not even had a sip.

The palate showed strong fruit flavors of cherry and blackberry. The acid was subtle but lingered through to the finish. At this point, I craved another sip. The tannins were apparent but mild and well integrated. This wine is very drinkable and would be a great party wine. I was right about my friends. They loved it as well. Unfortunately, the 2015 vintage is sold out. I think I need to give them a call and see about the 2016 vintage. If it is half this good, it will still be a great bottle of wine.

Makes Me Dream of Living in Italy

A week or so ago I saw an article on CNN that said the town of Sambuca on the Italian island of Sicily is selling homes to anyone for $1.00. Of course, there is a catch. Within three years of the purchase, you have to sink another $17,000-ish in repairs and remodeling. The homes/structures range from 430 square feet to 1600 square feet.  Apparently, the houses are selling fast by folks from other European countries that will make for a lovely vacation home.

Then again today also on CNN, I see that the tiny Alpine village of Locana, in Piedmont, the mountainous northwestern region of Italy that borders France and Switzerland is offering $10,000 to young couples who are willing to move there. You get an extra $1,000.00 for each child you have. According to the town’s mayor, it can be a unique opportunity to live in rural Italy and raise your family while working remotely at your job that is somewhere else in this world.

Both of these offers are to save these rural towns from becoming ghost towns because their populations are dwindling.

Holy cow! Oh to be young and adventurous again. I guy can dream.

One more T-shirt design added to my collection on Amazon. Check it out.

Yesterday, I got the wax off the bottle of Castell

Bad days happen. They just do. So pick yourself u

One of the joys of this wine excursion was to meet

Rarely, do you meet people for the first time and

Already missing my wine crew from the best wine tr

Our first stop in Sonoma was Two Shepherds. Meeti

Our last stop in Lodi was OOTW. I don't normally

In Lodi there are very few wineries as unique (or

What a joy to have lunch and taste Klinger Brick w

We met in an old vine Zinfandel Vineyard farmed my

Breakfast of champions. First stop of the second d