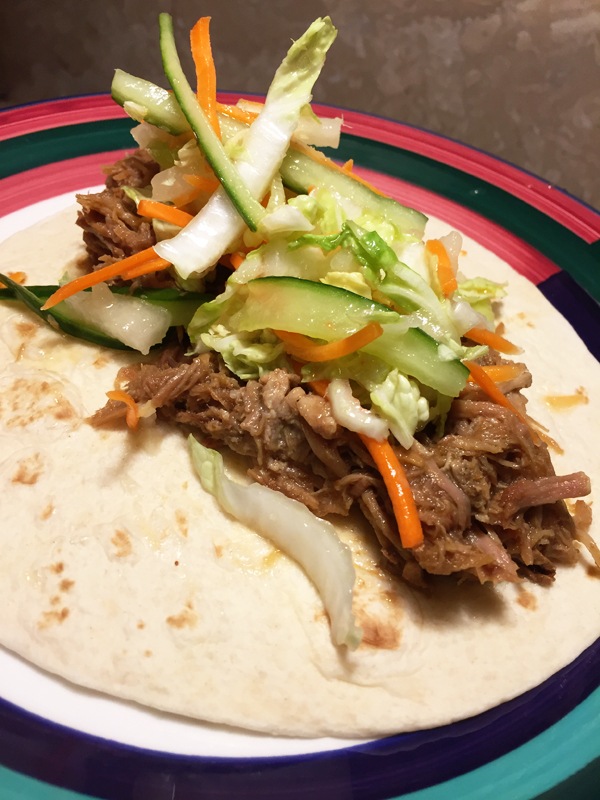 I get a email from the Cooking Section from the New York Times almost every day.  Someday’s it catches my eye and other days it just gets deleted.  They cover the gambit on food ethnicities, styles, courses, etc.. Some days I may print out three for four recipes and other days it is merely inspiration.  But the day, I read this pulled pork recipe I knew I had to try it.  If you like Asian flavors you will LOVE this recipe.  While a few of the the ingredients may not already be in your pantry they are easy to find at the grocery in the international aisle.  Thank You New York Times  for sharing this recipe.

Note:  The original recipe is a “Slow Cooker” recipe and I started in earnest to do it as written.  But my crock pot was too small with the shoulder packed in way too tight.  So after two hours and very little cooking taking place I was afraid it would not be done in time.  I moved it to my dutch oven and sped the process up on my oven.  Details will be below but I will include both cooking methods.

Prepare the pork (by removing skin and excess fat): Place a sauté pan over medium-high heat. After a minute or so, swirl in the sesame oil and then the onions, stirring to combine. Sauté for about 5 minutes, then add the garlic and continue to cook until the onions are soft and becoming translucent. Turn off the heat, stir in the ginger and set aside.

Add the hoisin sauce and the fish sauce to the pan, and stir to combine, loosening the mixture with a little less than half a cup of water. Add sriracha sauce to taste. 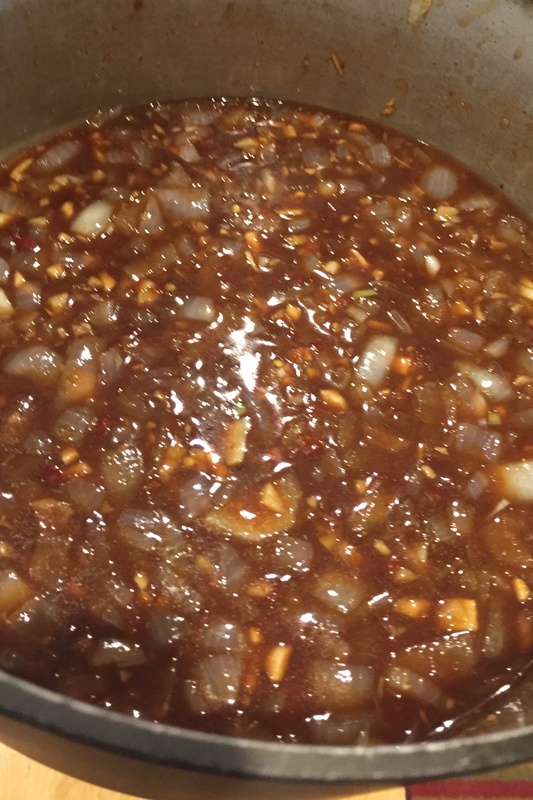 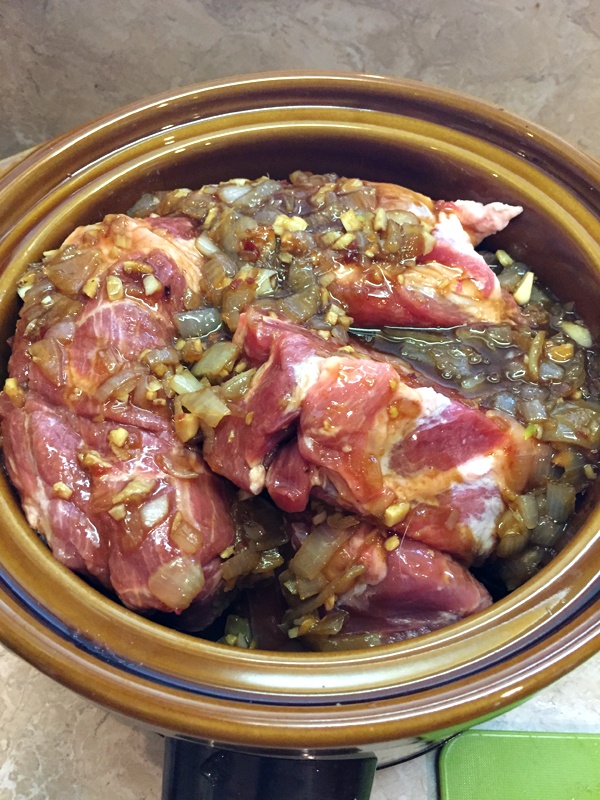 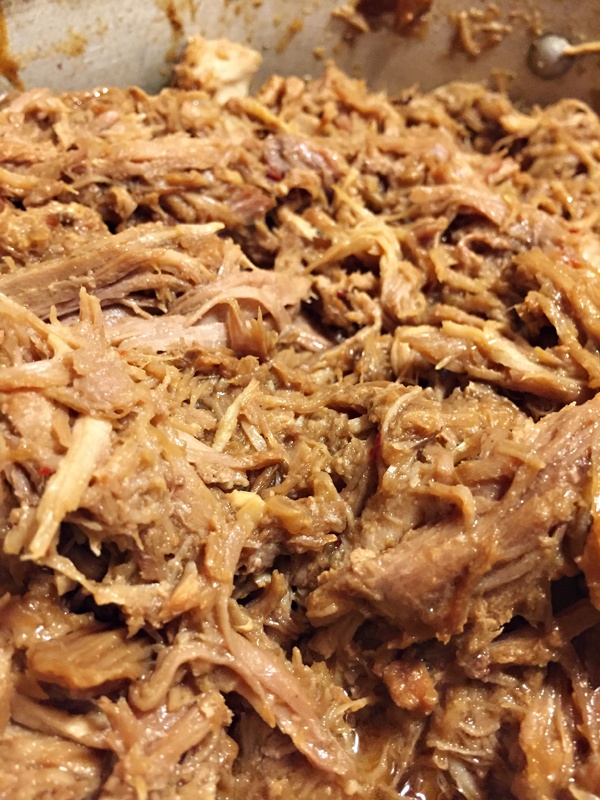 Make the slaw at least an hour before you plan to eat.

Meanwhile, make the slaw: Put the vinegar, ginger, sesame oil, neutral oil and sriracha sauce in a large bowl and whisk to combine. Add the cabbage, cucumbers, carrots and Asian pear and toss to combine.

Shred the pork with a pair of forks. Discard bones. Return the pulled pork to the slow cooker or dutch oven and stir to combine with the juices.  This is when you do a taste test.    Try the pork.  It should have a distinct Asian flavor with the hoisin and ginger coming through.  Add additional hoisin sauce and crushed ginger if needed.  Stir and let the flavors meld.

Serve with the slaw and warmed tortillas, with the cilantro on the side. 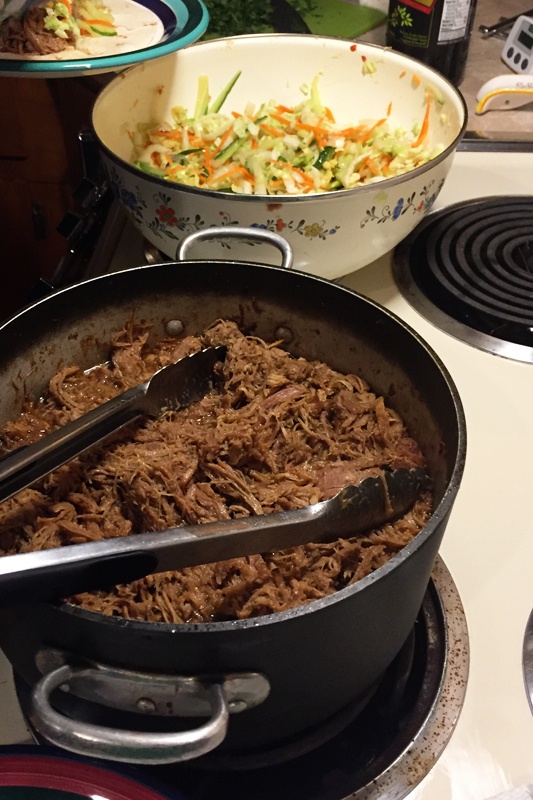 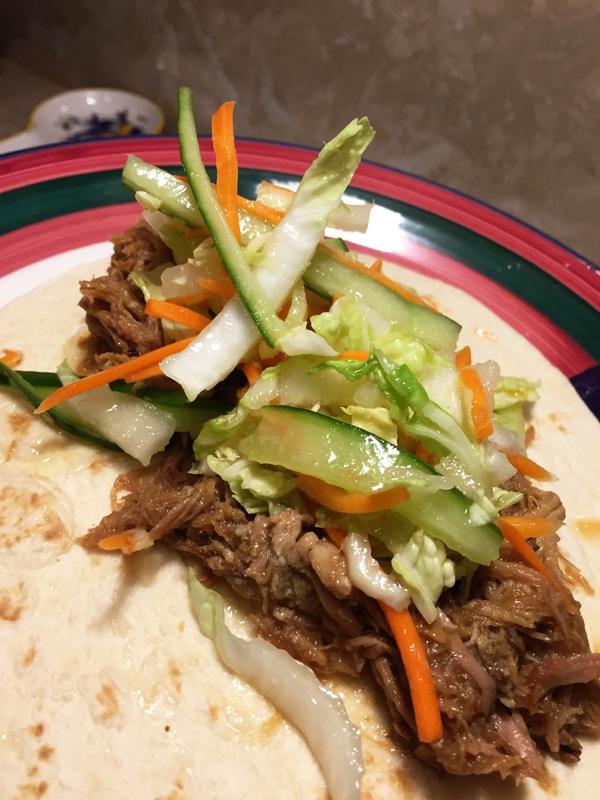 Substitute this cooking method for the Slow Cooker method if you want to cook this in less than 3 hours.  Pre-heat your oven to 450 degrees. Rack placed in middle of your oven.   Put a few spoonfuls of the sauce in the bottom of a dutch oven, then nestle the pork on top of it. Pour the remaining sauce over the top of the pork. Cover and place in 450 degree hot oven for 45 minutes.  Do not check on the pork at this point as you do not want to release the steam.  Turn the heat down to 325 degrees and cook for an additional two (2) hours.   You can now check the pork to see if it easily fork shreds.  If so, it’s done.  If not cook  until it falls apart with a fork.   When done, leave the lid off and let rest for a few minutes.

You can make the pork the day before and refrigerate.   To reheat before serving place back in slow cooker and heat again.  Or add about a 1/2 cup water to your dutch oven and blend into the pork.  The additional moisture should keep it from sticking.  Warm over medium high heat.   DO NOT reheat in a microwave oven as it can burn quickly.

I wanted to serve the tacos with an Asian inspired “guacamole”.  I found this Burmese salad recipe on Have Another Bite and it did the trick.

Avocado Salad with Tomato and Peanuts 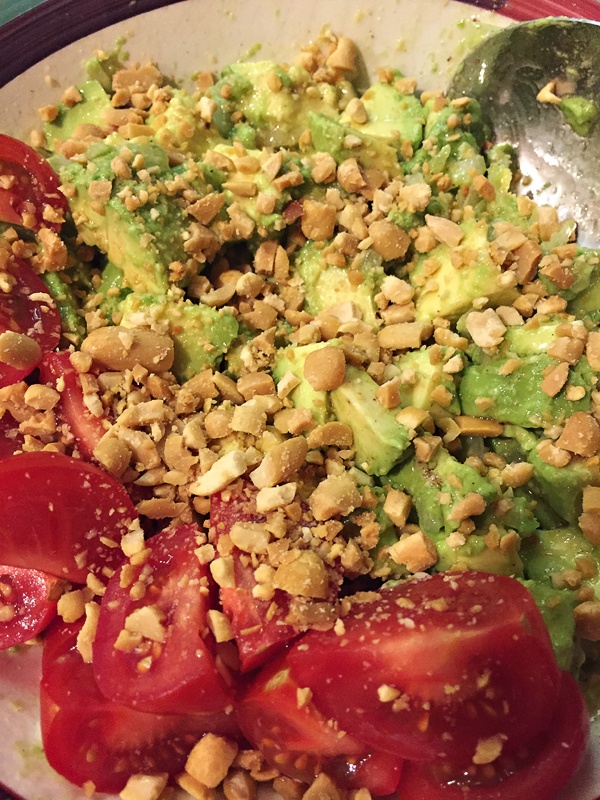 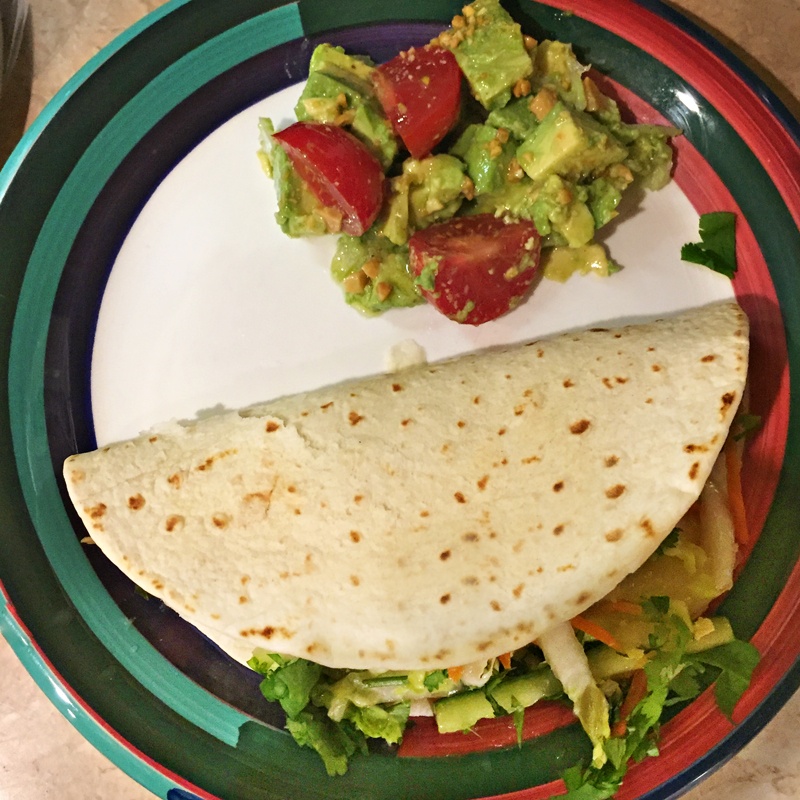 This dinner was a huge hit.  And we had lots of leftovers.  So I shared with several others and even they loved it too.  This recipe is a definite do-over.

Since the recipes were Asian influenced, I thought I would end this post with two of my favorite images from my trip to Myanmar.

Categories:Food Image of the Day Recipe The Munch weekly pour

You tell me what is happening here. On the bed wit