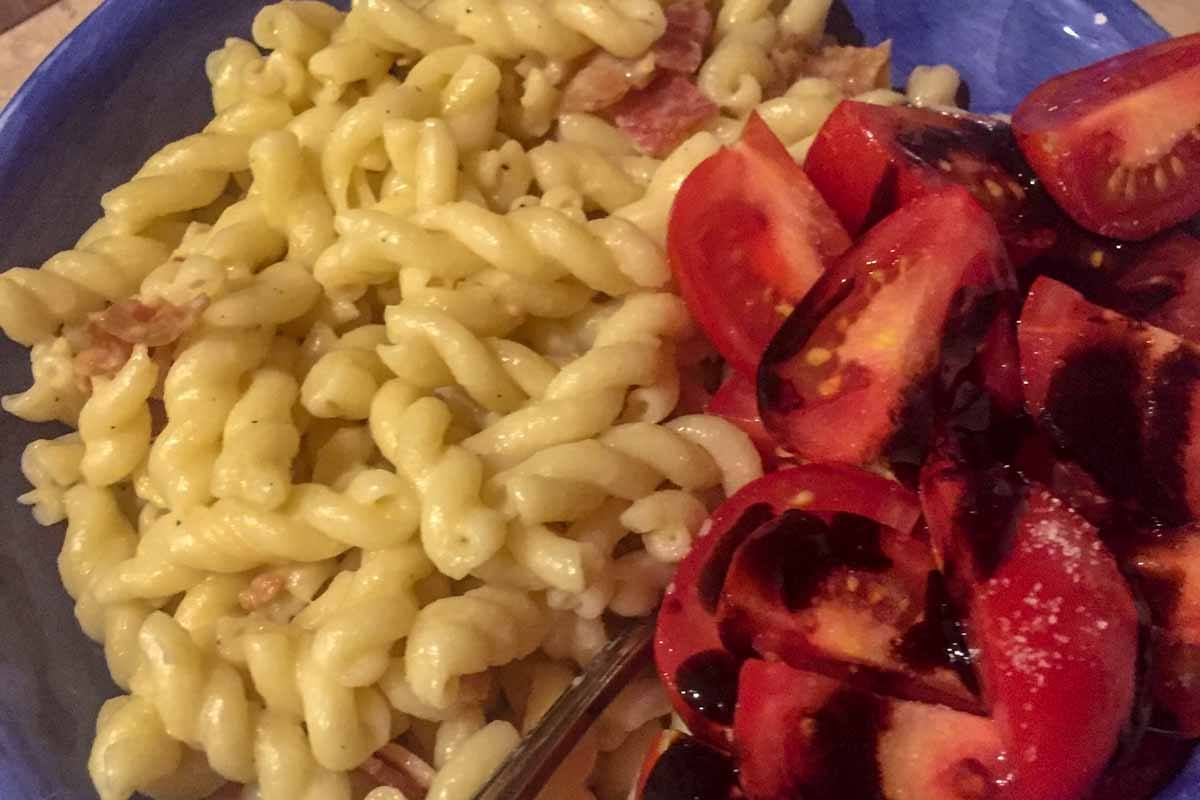 Before I get to my pantry raid, let’s talk pumpkin.

As Halloween approaches and jack-o-lanterns appear on the porches all over the country, there is a question I have to ask. If you bought an extra pumpkin at the market, should you make it into a pumpkin pie? I am here to tell you, don’t do it.  You can, for sure, but it will not turn out as you would expect.

All pumpkins are squash, but all squash are not pumpkins. In some countries, all squash are called pumpkins. But in most countries, all squash and pumpkins are called squash.  You can see how this gets confusing. In the US we use both, and the FDA has such lax labeling rules that you can call it either. Suffice it to say, the pumpkin in the Libby’s can, you buy at the store is more closely related to the butternut squash than it is to what we more commonly call pumpkin. Call it what you want, but squash pie doesn’t sound as appealing as pumpkin pie.

Have you seen my Pumpkin Pie Bread Pudding Recipe?

Raiding the Pantry for a Quick Dinner

Most days, there is no recipe short enough or simple enough to make the kind of quick dinner that I am craving. I want an unusual flavor or spice.  How is it that the pantry is bulging at the seams, but there seems to be little to eat.

On this night, Gary wanted Macaroni and Cheese. And we had no Kraft Mac & Cheese or anything resembling it. There was no way I was making a cheese sauce. I just was not in the mood. So I start digging through the pantry. We have lots of different pasta noodles. There is even a block of Velveeta, but I will not eat it unless forced or that Velveeta Sausage Dip. Then in the back corner buried behind god know what, I see this… 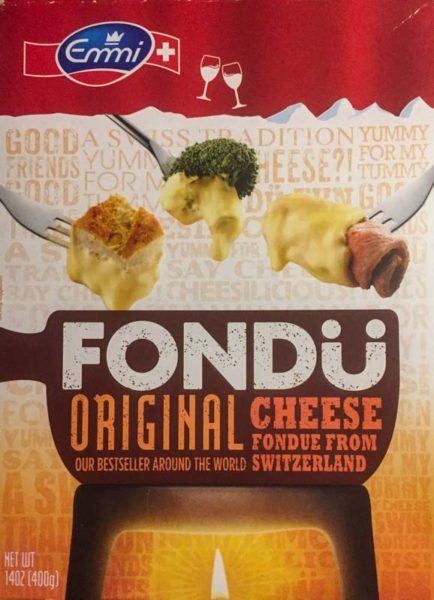 …cheese fondue from when I made the Crispy, Crunchy, Easy, Cheesy, Gooey, Baked Swiss Fondue Bites. Immediately my mind was racing, and I knew that this was the answer to my dinner dilemma. It will need to be thinned down some but this I could do and quick.

So I cooked the pasta as instructed on the package. Once the pasta was done, I retrieved two ladles of the pasta water from the pan to use to thin out the fondue. Then I poured the pasta into a strainer. Lowered the heat on the stove. Dumped the fondue cheese in the hot pasta pan and added the pasta water. Once the cheese began to soften, I slowly started stirring to keep it from burning. The water was not enough, so I grabbed a jar of chicken broth and added a bit at a time until the cheese was now a sauce.

I tasted it and super excited, but it was missing something. Bacon, it was missing bacon. I always have pre-cooked Costco bacon in the fridge, so I grabbed six slices and popped them into the microwave until crispy. Chopped. Added. Wah-la! Dinner is served. 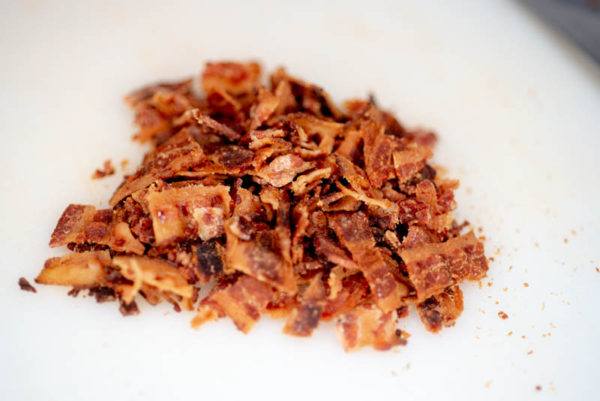 Served with tomato wedges with a touch of salt, a drizzle of olive oil and a double drizzle of balsamic glaze. For the record that is always in my pantry as well. 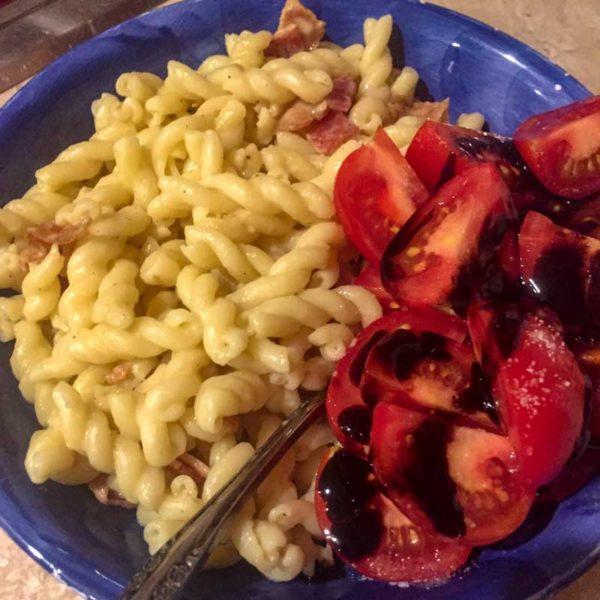 In the end, Gary gets his mac & cheese. I get to use pantry items and elevate it beyond my expectations and not have to run to the store or spend hours at the stove.

Not Quite a Pantry Raid

Ok, we love pasta and eat it a few times a month. I had been craving my Oven Roasted Tomatoes for quite a while. So on my last visit to Costco, I picked up three two-pound packages of their Campari tomatoes. 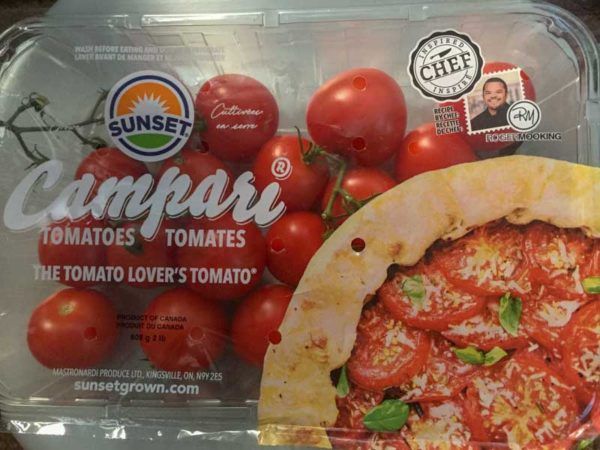 I used two of the packages to roast and saved the other for salads. I added some fresh garlic this time; about six cloves. It also took 4 hours to finish cooking due to the water content in these tomatoes. When they were done, I knew that we had to have these over pasta with some fresh mozzarella. I had the cheese in the fridge and the pasta in the pantry, so this was kind of a raid.

Other than planning ahead to roast the tomatoes this was a super quick dinner that came together because I was craving my oven roasted tomatoes. 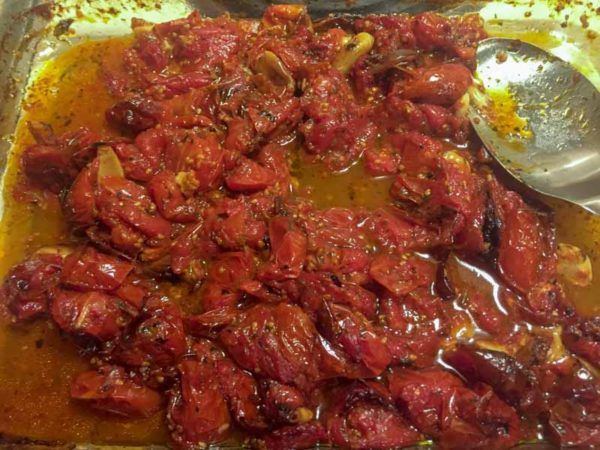 Place the mozzarella cheese in your bowl or plate with a drizzle of olive oil and a pinch of fresh oregano. Then add the cooked pasta and topped with the oven roasted tomatoes. If you made the tomatoes ahead of time, you would want to re-heat before adding to the pasta. 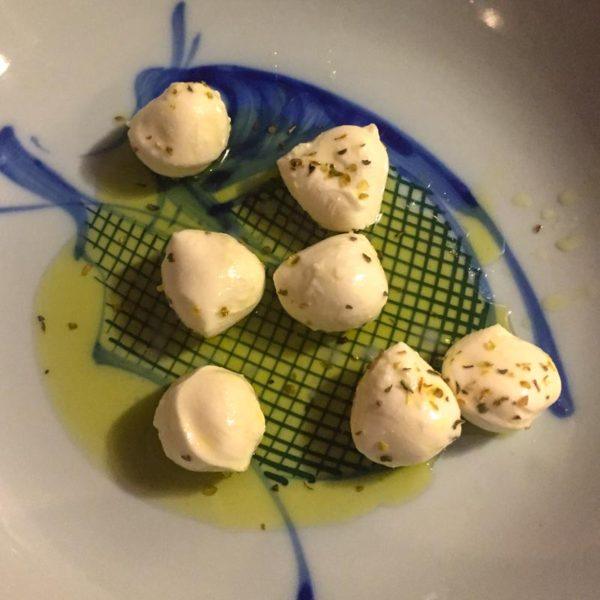 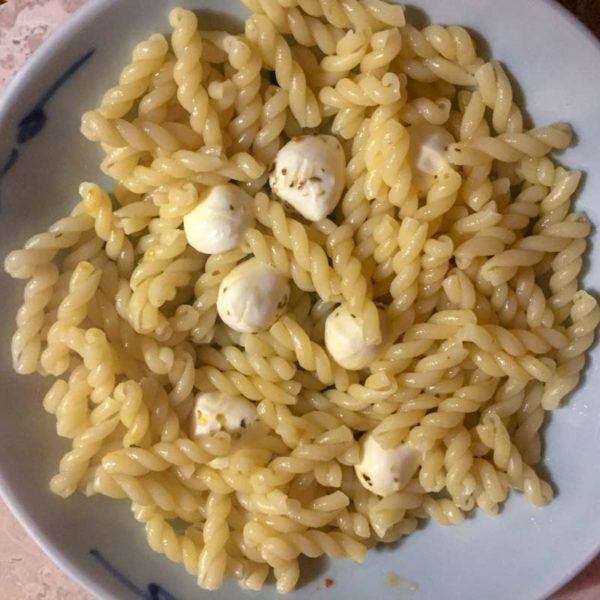 If you want to top with a sprinkle of Parmesan cheese you can. We didn’t. Cheers! 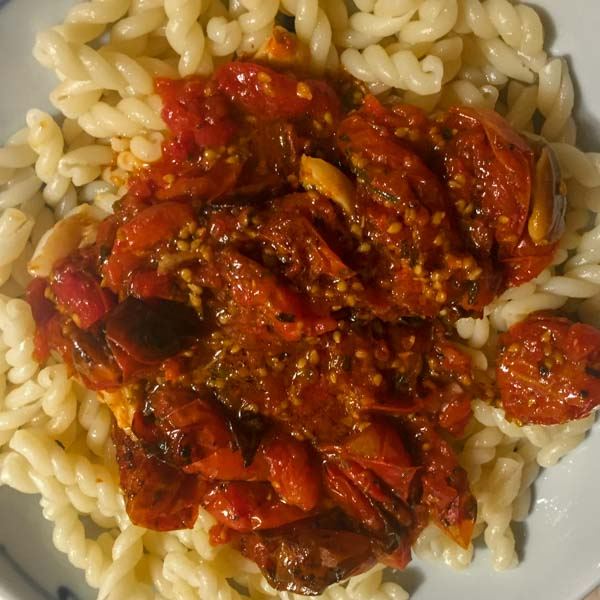 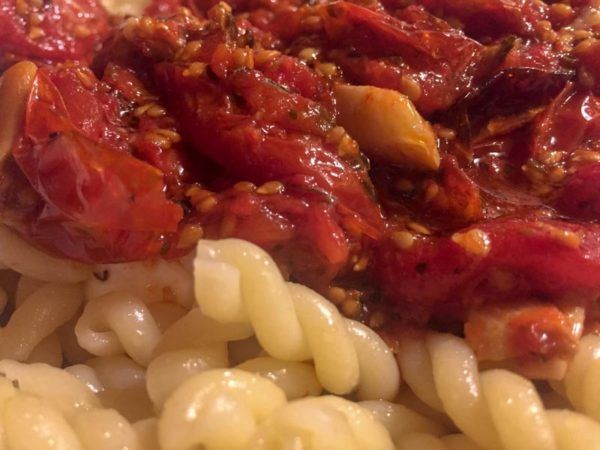 That’s all for now! 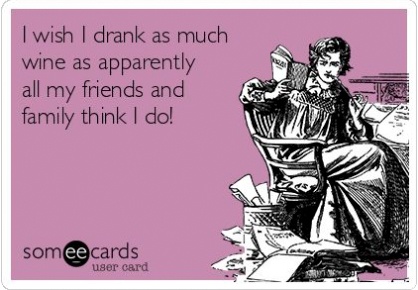