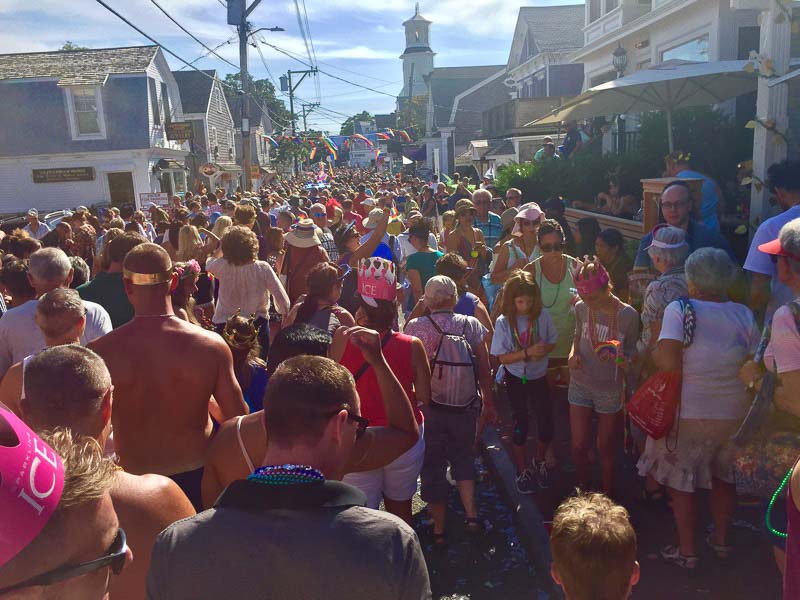 But there is just so much that I want to share with you. I just need one more post, and then I will have the weekend to get back into my routine. Cooking, Drinking, Eating, etc…

We chose to take our vacation the third week in August because that is Carnival Week. There are all kinds of parties and events, and it seems that everyone has a costume on at one point or another. All week long you just never know what you will find walking down the street. We did not bring any costumes because we had no idea what to expect, but next year… Oh, Golly look out!

Thursday afternoon is parade day, but you need to stake out your spot early because the town swells to close to 100,000 people from all over to catch a glimpse of the creativity on display.  The uniqueness and hilarity of this event is that there is a parade within the parade.  For a couple of hours, before the start of the official spectacle of floats and marchers, you have party-goers and bystanders in costume parade up and down the street. Some sing, some dance and some just pose, but you are thoroughly entertained while you wait for the official parade to reach your spot. Beads are the tchotchke of the day, and I collected quite a haul. Here is a glimpse of some of the sights. This year’s theme: Gods & Goddesses

The best whale watching on the east coast happens off the coast near P-town and Dolphin Fleet of Provincetown is who you should choose for the best experience. Not only do they provide the best tours, but they also do research and education to keep the Atlantic whale population surviving and flourishing for centuries to come.

My P-town Home Away From Home

Somerset House Inn is where to stay. It is centrally located and surrounded by shops, art galleries and restaurants and close enough to walk from the pier if you take the ferry over from Boston. While central, it is in a quiet section of Commercial Street but only a few minutes walk to the hub-bub of P-town nightlife. 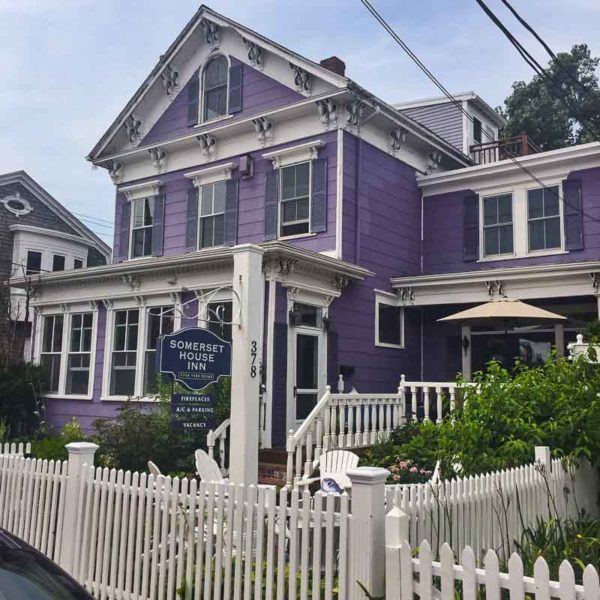 Breakfasts are homemade and delicious. And the Evening Reception provides a comfortable opportunity to meet the other house guests over beer and wine and nibbly bits while sitting on the porch or the Adirondack chairs in the front yard.

This is an old house (actually two houses joined years ago) built in 1840’s as a Captain’s house. There are 12 rooms on three different floors. Eleven of the 12 rooms have ensuite bathrooms, and the one that does not, it is just down the hall.

We were lucky enough to meet so many folks from all over the country as well as Canada this year and look forward to seeing many of them again next year, as we are already planning our Carnival trip for 2018.

Cheers to ya! Matt & Justin, Jakoda, Susan, Will, Cassie, Joe & Paul, Joe & Derek, Tabitha (aka Trixie) and Nick. Not to mention Kathleen & Shelly and Michael & Mark that we have known now for many years and love seeing every year. But the stay would not be the same without the Innkeepers, Bob and Dan and Bizzo, the resident Golden Retriever. Once the innkeepers now our friends!

Any trip to the tip of Cape Cod must include at least one stop for a Malassada (Portuguese Fried Dough). They are decadent, pillowy, sugary sweet and capable of giving you a sugar hangover if you are not careful. And they must always be consumed warm, so if you walk by and the tray is empty, and no one is frying, then just keep on walking. The best time to find them fresh is before 11am and randomly in the afternoon. And yes, they are huge! 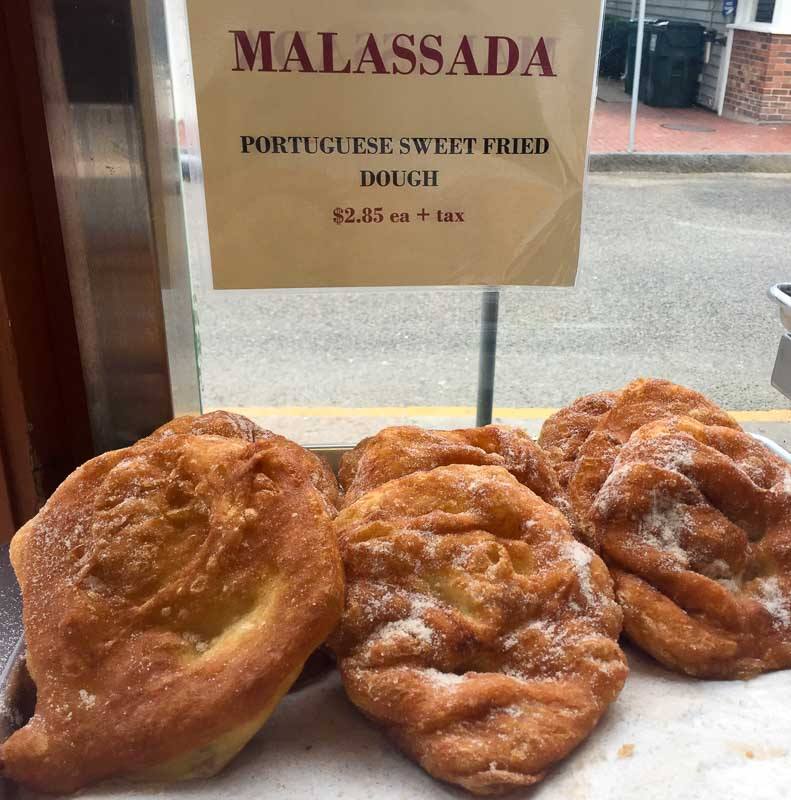 I wanted a shrimp cocktail for my lunch one day but Gary laughed at me. Why would I get shrimp where it is probably flown in from Thailand, especially when the lobster was fresh off the boat?  I saw his point and ordered the Chilled Lobster topped with Seaweed Salad. It was incredible. The fact that the lobster is cheaper than the shrimp was another bonus. Gary had the Lobster Bisque. He always ordered bisque at least twice during the stay. This was at Pepe’s Wharf which is now owned by the same folks at The Patio.

We always try to have a late lunch at The Canteen. It has to be late to avoid the line to place your order. Fortunately, they have expanded the outdoor seating around back leading to the beach. 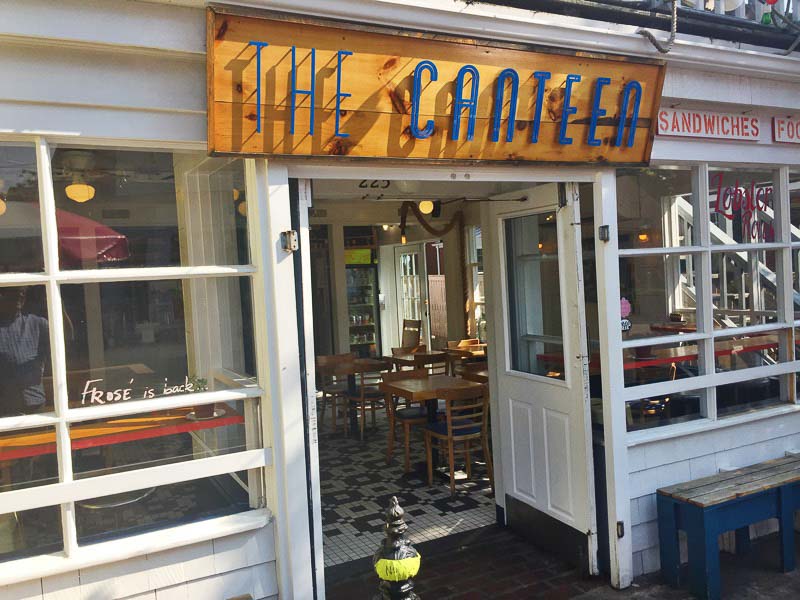 I had the New England Cod Bahn Mi. It was a huge sandwich and the pickled vegetables and fresh mint and cilantro were on point to truly highlight the meaty fish. Gary had the Bacon & Buttermilk Salad with a Scoop of Lobster Salad, and if he could, he would have licked the bowl.

You may find it hard to believe but sometimes you can not eat another lobster. That is when you head to P-town favorite, Spiritus Pizza to grab a slice after the bars close or a whole pie if you skipped lunch and now this is dinner.  It is a simple East Coast pizza with a super thin crust, but the sauce is killer with the perfect amount of cheese and pepperoni. 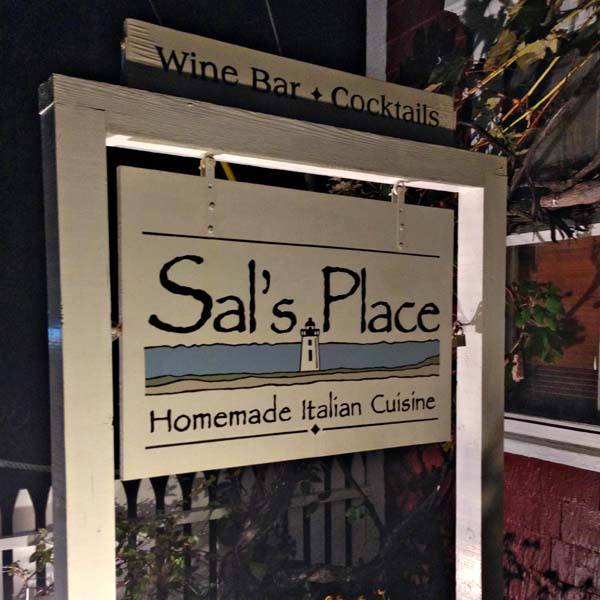 One evening we ate at Sal’s Place with our friend and innkeeper for Somerset House Inn, Bob. We had a lovely dinner out on the deck.

Apparently, there has been an ownership change and lots of drama since we were last there. But all that seems to be behind them now.  If you had been to Sal’s prior to 2016, you would not even recognize the place. The building used to be red with white trim with a big sign on the side. We walked past the restaurant twice earlier in the week and “could not find it.” Alas, it is now white painted and natural cedar shingles. The menu changed too. It used to be an “old-school” Italian menu that was pages long with every traditional Italian antipasto, pasta, and secondi available.

It now has select dishes and I imagine changes frequently.  I had the Bolognese on Rigatoni. It was a not as traditional preparation but was delicious.  Gary had the Fried Eggplant that he raved about and Bob, a Beef Tenderloin top with Pesto and served with baked potato wedges. And I know you should probably not mention the bread, but OMG it was amazing. I used it to sop every last drop of sauce from my bowl. When it is that good, no one had any trouble being “clean platers”.

So that is all I have for you for today.  I hope that you enjoyed P-town as much as I do. I end this post with more pictures of this beautiful locale at the tip of Cape Cod.