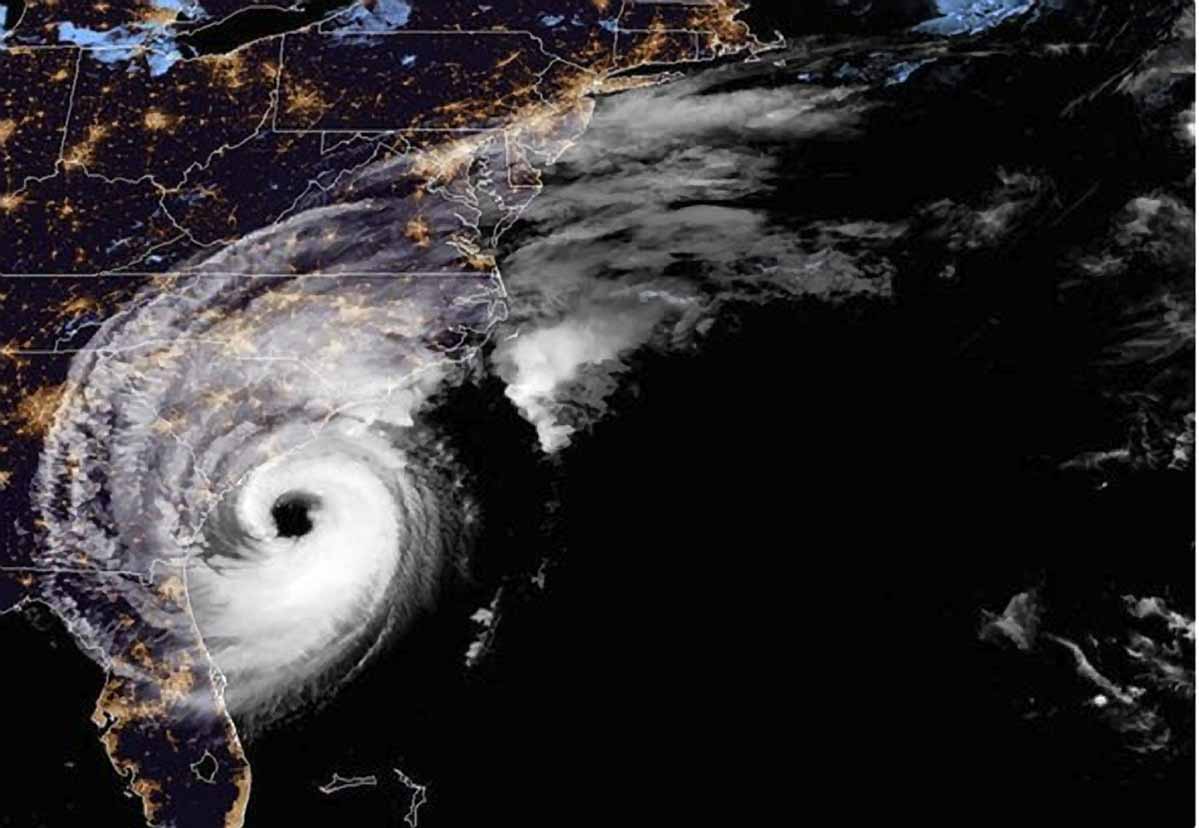 Hurricane Dorian Spared Our House but…

I know this is a wine, food, and “love of life” blog. But I thought a first-hand account of the hurricane was a great way to get back in the swing.

When dealing with a hurricane, unlike any other catastrophic storm, it is a hurry up then “wait” situation. The path of uncertainty, coupled with the constant barrage from the local news makes us wary and unconcerned. So we wait.

The state is always in a hurry to call for an evacuation. This year was no different calling it on Sunday with the storm “arriving” until Thursday. So we wait. At some point, you start your storm prep, then wait. Sometimes the wait is several days as it was with Dorian as it sat over and destroyed Grand Bahama Island and the Abaco Islands.  Storm fatigue starts to slip in already. People have been off work now for a few days. Their kids have been out of school, and all we can do is wait.

Some years you get to this point, and the storm never arrives. It makes a turn or fizzles out before it reaches you.  On the one hand, that is a great thing, but on the other, it is bad because you get frustrated for losing time off at work, and all the prep work was “for nothing.” You begin to get even more complacent.

This time we were reasonably confident that Dorian was going to skirt the coast starting early Thursday morning.  It’s been three days that we all have been “waiting.” So on Wednesday afternoon the neighborhood hurricane party invites come in.

Happy hour starts at 4 pm at a neighbor’s house. Even though it was only four houses down, we drove to avoid getting soaked from the rains that had already arrived. On the way, we passed two other parties already in progress. 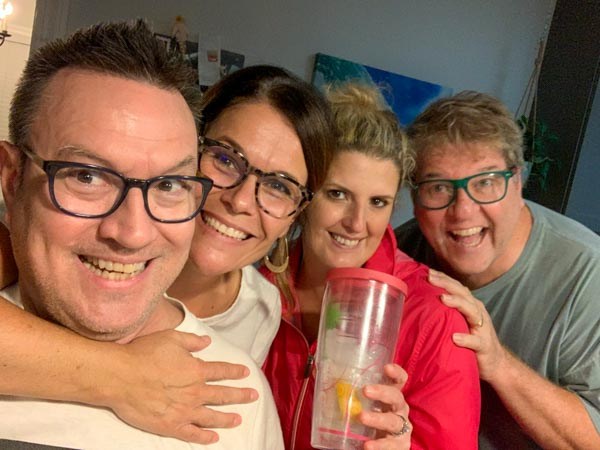 Rosé and beer were flowing. At some point, one of the other parties merged with this one. We were all very “happy.”  At about 8:30 pm, some of the kids started getting grumpy and tired. So their parents gathered them up and took them home. Those of us remaining were not ready just yet to call it a day so when someone had the bright idea to head to another party at one of the marsh front homes we all jumped in our golf carts and headed three doors down. 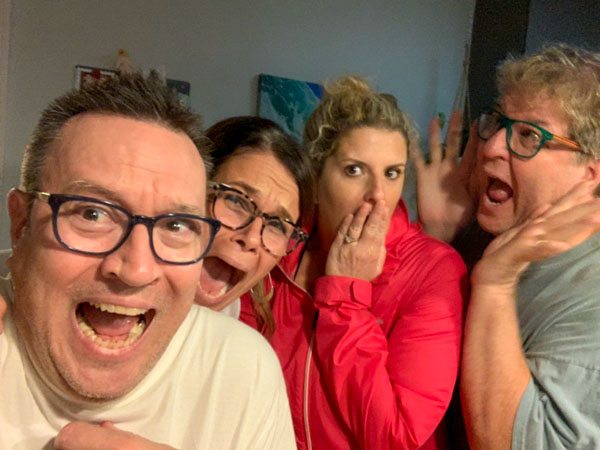 By 10:30 pm, Gary and I were tired and ready to call it for the night even though the party carried on into the night. I am not sure when it ended, but I know that Dorian had arrived bringing all that it could at about 4:30 am when the power went out.

We tried to get our generator running at 4:30 am, but it is a cranky, Chinese knock-off and is very temperamental.  Gary looked at me, and we both shook our heads, we are investing in a quality generator before the next storm comes. We gave up and went back to bed.

We woke up around 9 am, hungover but reasonably rested. So we made camp on our screened-in porch and watched the trees in our back yard bend and sway as the gusts clocked 70 to 100 miles per hour.  Dorian’s eye was 60 miles off the coast, but we had no idea it became at Cat 3 overnight. In between the gusts of wind and rain showers, we could hear the generators buzzing all around us at our neighbors’ homes.

Friends from Afar Reach Out

Throughout this day, texts came in from friends all over the country, making sure we were not in danger as the TV news made it sound like Charleston was underwater. Some of Charleston was, but we were okay. I ended up sleeping off and on for most the day. Partly out of boredom and partly from the 6 1/2 hour hurricane party the night before.

By that evening, after a day of cold Pop-Tarts and chips, we headed back to our neighbors because they had a gas stove. We wanted to heat some water to make instant mashed potatoes and soup. I had stuff in the fridge and freezer, but since we were not sure how long power would be out, we did not want to open the doors and let out the cold.

Now do not knock it until you try it…. I made instant Mashed Potatoes mixed with Split Pea & Smoked Ham Soup and Mustard. It is a riff off of Yellow Split Pea soup I used to eat when I lived in Sweden. I love it.

After we ate and visited with Michelle and Jean-Marc, they said that we should take the generator left by another neighbor who evacuated with their new baby.

Jean-Marc brought the generator to us. It has a battery/electric starter, so it powered right up. And then without much effort, he was also able to kick our generator on as well, so now we had two. I felt very old at that moment.

The fish tank and the two refrigerators were the priority.  We had the aquarium in a dormant state wrapped in a wool blanket for 18 hours, but the water had already cooled by 3-4 degrees…. Getting them back to tropical ocean temperature was critical.

Since the eye of the storm was out at sea, our biggest issue was wind, not water. The gusts were powerful, and you could hear when trees nearby were crashing to the ground. 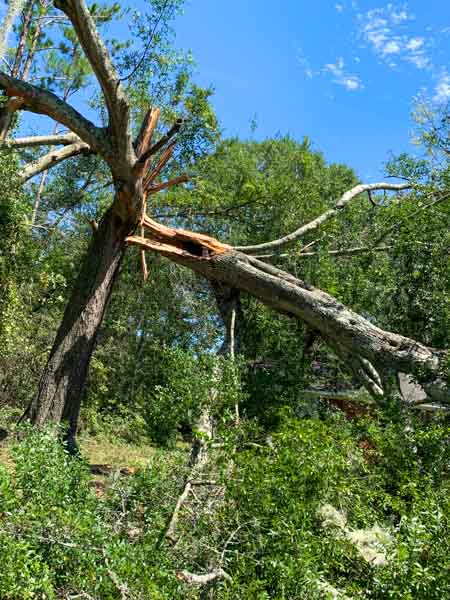 It is now Friday afternoon, the storm is gone, and the neighborhood is in clean up mode.  I counted at least four, maybe six places where the electric lines were down and in the street.  Some neighbors were not as fortunate as trees lay on their houses and cars. One small tree was uprooted and then lifted and put on the roof of a house. It looked so odd — very little damage but just laying there. 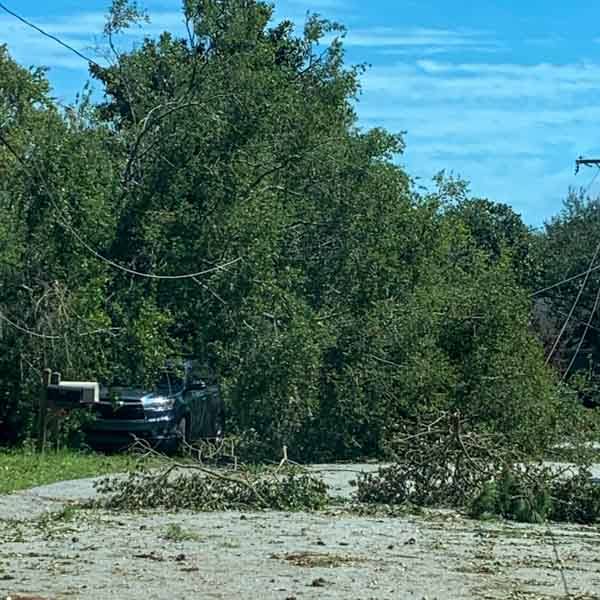 Another had both cars buried under a fallen tree. 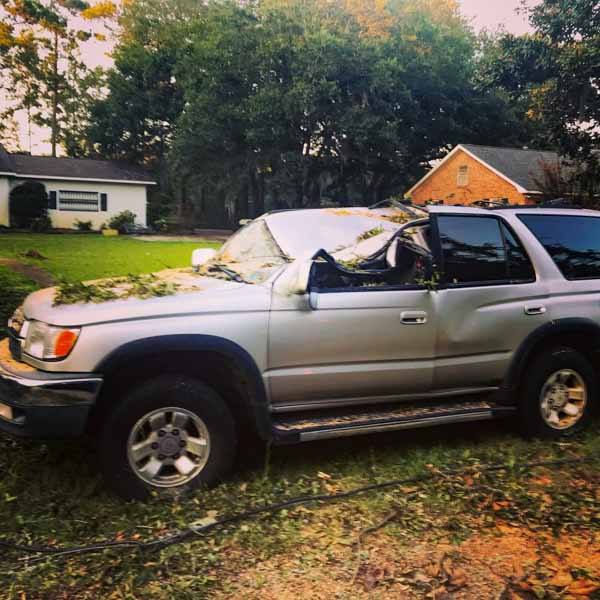 And yet another neighbor was not lucky at all. 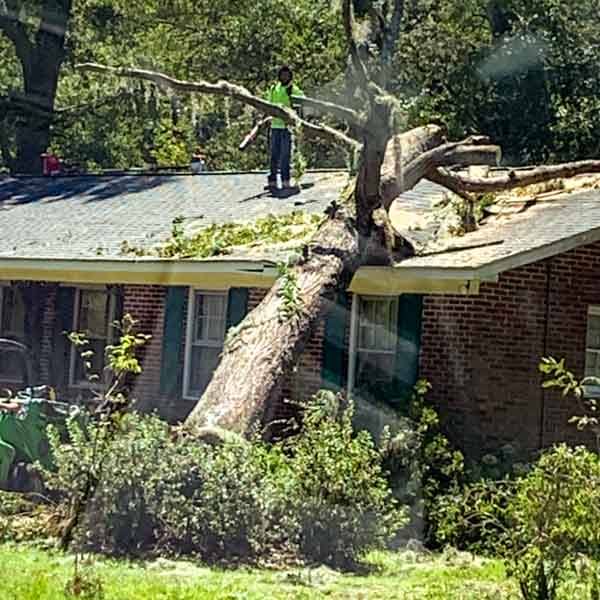 All in all, Gary and I came through this storm unscathed.

Now it’s time to get ready for the post-storm cleanup party at another neighbors house. 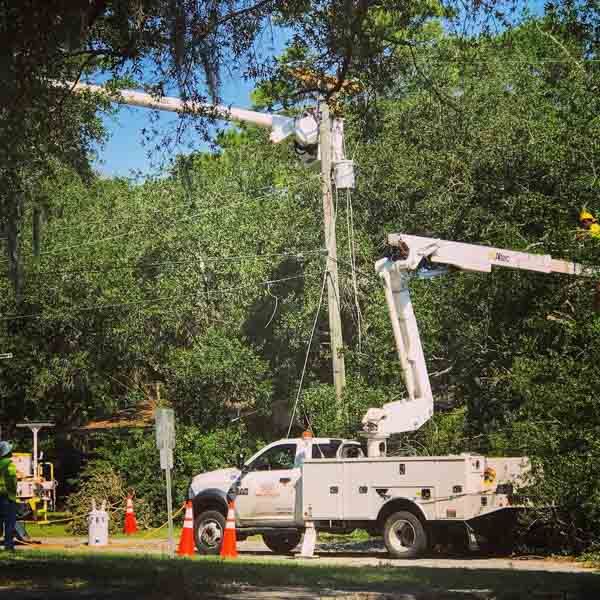 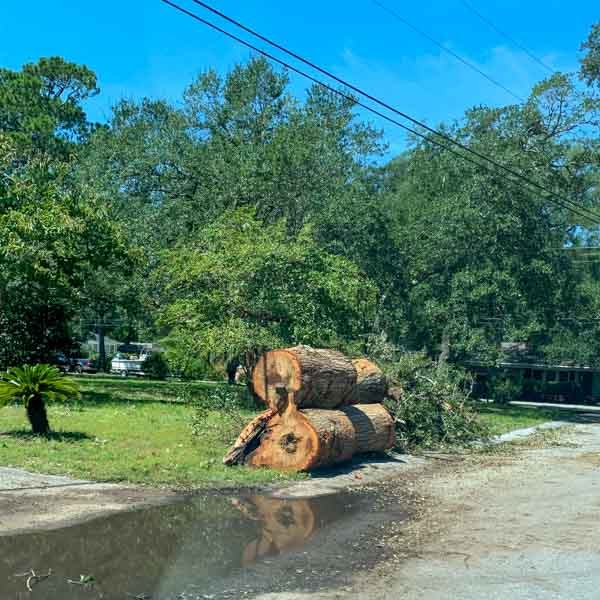 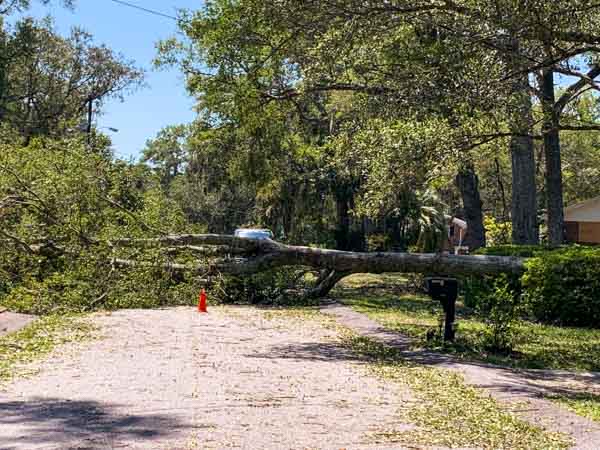 I hope we get power before that happens, but that will not stop the party, so whatever!

And yes we will be buying a new generator before the next storm arrives. 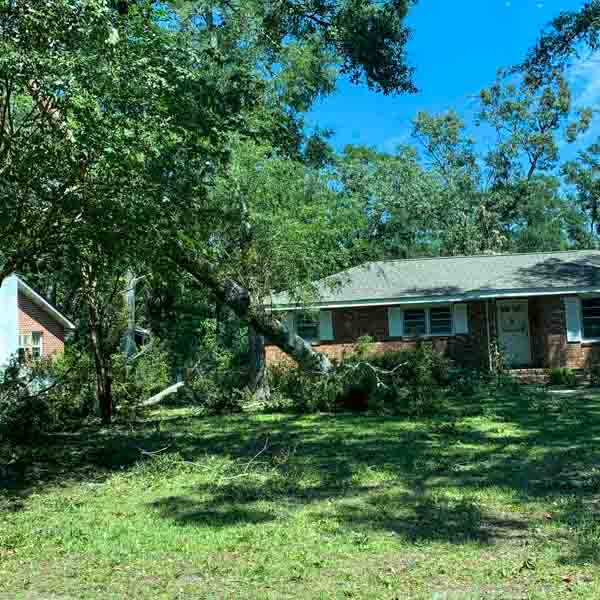 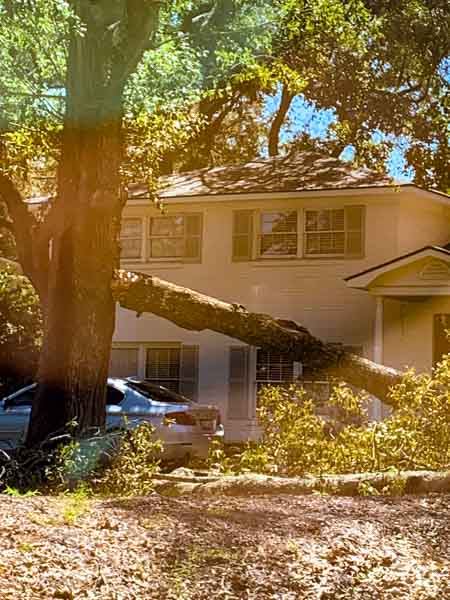 We got out power back around 8:00 pm on Friday. Honestly, we did not expect to get it turned back on until Sunday sometime. We have a new owner of our utility company, and this was their first storm in Charleston. Not sure if they were trying to impress or if this is the new normal. Whichever it is, I love it!

After removing the spiderweb of extension cords and reconnecting all the appliances and the reef tank, the bottled-up stress of the storm hit us like a ton of bricks. There was no way we made it to the post-hurricane party.

It seems from “word on the street” that our neighborhood was one of the hardest hit in the area from a wind perspective. I can believe that as I have never seen so many downed trees in the 15 years of living here.

Lastly, I want to tell you all that I love our neighbors and our neighborhood. Some of us hang out occasionally, but we all have families and priorities that keep us busy. But we took care of each other this week. And in today’s society, this means the world to me.