For those who had a day off from work yesterday, I hope you had a wonderful three day weekend and celebrated accordingly.  I wore my other business hat on Saturday shooting a big outdoor wedding. It was a twelve-hour “shooting” day so all in all a 14 hour work day which is rare for me. On top of that, it was 90 degrees or hotter most of the day which made it a real challenge for us to stay hydrated and not overheat.  We muscled through it, and it was an incredible event. Amazingly, we shot just shy of 6,000 images.  That is a first for a single wedding.

Pegga & James were the bride and groom.  She is Persian-American, and he is Anglo-American.  They are the sweetest couple.   While it was mostly a typical American wedding, there was a blended ceremony with a beautiful Persian alter, a mix of popular American and Persian dance music and a dessert table with homemade Persian desserts that were killer. (yes, I was permitted to try them.)  There was a Persian Baghlava (baklava) that I will be tracking down the recipe.  So, so good!.

Balance of the Weekend

When the wedding was over, instead of heading home I went to my sister’s beach house where family and friends gathered for a cook-out.  Arriving at close to midnight, I missed the party but wanted to be there the next morning to spend time with family.  I was a zombie for most of the morning sitting with my feet propped up drinking coffee, listening to the buzz of my family.  The dogs were playing, sisters were playing cards, and Gary was out on a beach walk.   I could not have been happier.  Eventually, I had to take a nap as I could not stay awake.  I was not alone in the nap department, so I did not feel too bad.

When nap-time concluded, it immediately became wine-time drinking the Paraduxx Pinot Noir Rosé 2016. Look for that wine on tomorrow’s post. We ended up spending all day Sunday at my sister’s.  For dinner, we had an amazing Grilled Chicken with a Kale and Cabbage Slaw that you will see on the blog soon. Super delish!

So, I have a confession to make.  Last weekend, I already upgraded my Spiralizer to the 5-1, crank model and I love it. So far I have made an Asian Cucumber Salad with Red Onion and Tomato and Quick Pickled Cucumber Strings.  I love the long spaghetti-like strings of cucumber.  And the full blade slices an onion super thin.  It is super easy with a fast cleanup.

As far as the Asian Cucumber Salad goes, there really is not a recipe, except for the dressing that I made.  I spiralized a whole English cucumber, and a half a red onion (using the slicer blade).  Then I sliced a handful of cherry tomatoes in half, tossed in the bowl and dressed the salad.   I generally make all my salad dressings because I like the flavors to compliment the other elements of the meal.  I keep several empty jelly/jam jars on hand to mix the ingredients and then store if needed.

This salad was my lunch one day and I was craving Asian flavors.  The dressing I made included toasted sesame oil, olive oil, rice vinegar, minced garlic, salt, Vietnamese chili & garlic sauce and orange marmalade. What are the exact amounts of each ingredient? I wish I could tell you, but it is entirely done by taste.  But don’t despair, see below for guidance.

Start with one spiralized English cucumber and place in a bowl or container that has a lid. Set aside. Fill a quart jar one-third full of apple cider vinegar.  Add in approximately a half inch of agave nectar.  Next, add a teaspoon of salt.  Finally, add cold water just below the neck of the jar.  Put the lid on the jar and shake, rattle and roll until it is well blended.  Pour over cucumbers and let marinate for at least 4 hours.   If you like the heat of Thai Cucumber Salad, you can add a dollop of Vietnamese Chili Garlic Sauce and stir in before you marinate.

As a general rule, one should use 1 part vinegar to 3 parts oil.  The actual amount of oil depends on how big the salad is.  Obviously, if you are making a salad just for you versus the entire family, the quantity will vary significantly.  Just keep the 1:3 ratio in mind and add the remaining ingredients and taste.

The key to a great salad dressing is the balance between sweet and sour.  The herbs and spices add flavor and the oil added depth and viscosity.  But it is the balance of sweet and sour that can make or break your salad.   Oils I keep on hand include olive oil, walnut oil, grapeseed oil, and sesame oil.  A note about olive oil: I keep two different olive oils on hand at all time.  One for salad dressing and one for cooking.  They are both high-quality oils, but the one for salad dressings is of the highest quality and purity.  There is a huge difference in olive oils based on quality and price.

I also keep several bottles of vinegar including, champagne, red wine, apple cider, rice, balsamic, and white balsamic.  Other sour ingredients include lemon juice, lime juice, and several varieties of mustard.  Sweeteners include sugar, honey, agave nectar, marmalade or jam, fruit juice and macerated fruit.  Salt is a must and usually pepper but not always.  Fresh herbs can be blended in with a blender or just added into the salad.  There is no herb or spice that is off limits for a salad dressing. If it is in another course of your meal, it can be in your salad dressing. Start with a little, experiment and have fun.

I do not need to say anything more about my new spiralizer.  It is flawless.  So simple to use and so easy to clean up.  My brain is spinning thinking of the meals I can make with my new toy.  I am already looking forward to next weekend.

But I do have one very important note that you will want to know.  Once you have spiralized you more than likely will need to cut the spriralized vegetable into manageable lengths.  Otherwise, they can get unwieldy. 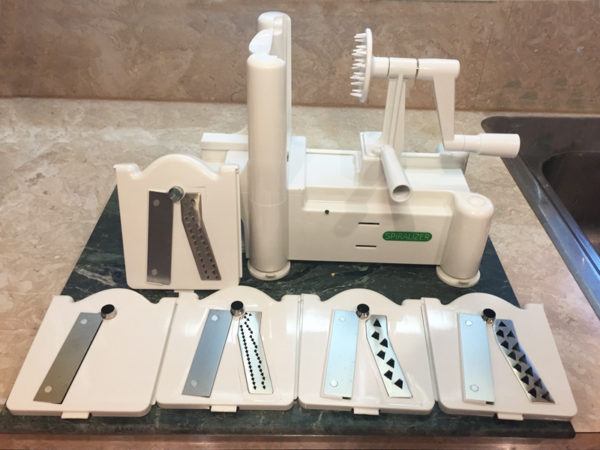 Whew, what a weekend!

Last Sunday, I had the pleasure of attending a sma

Strong Coffee to Red Wine comes in many forms. Thi

I am still reeling from a couple great wine events

Line up from impromptu happy hour with @snoopnatty