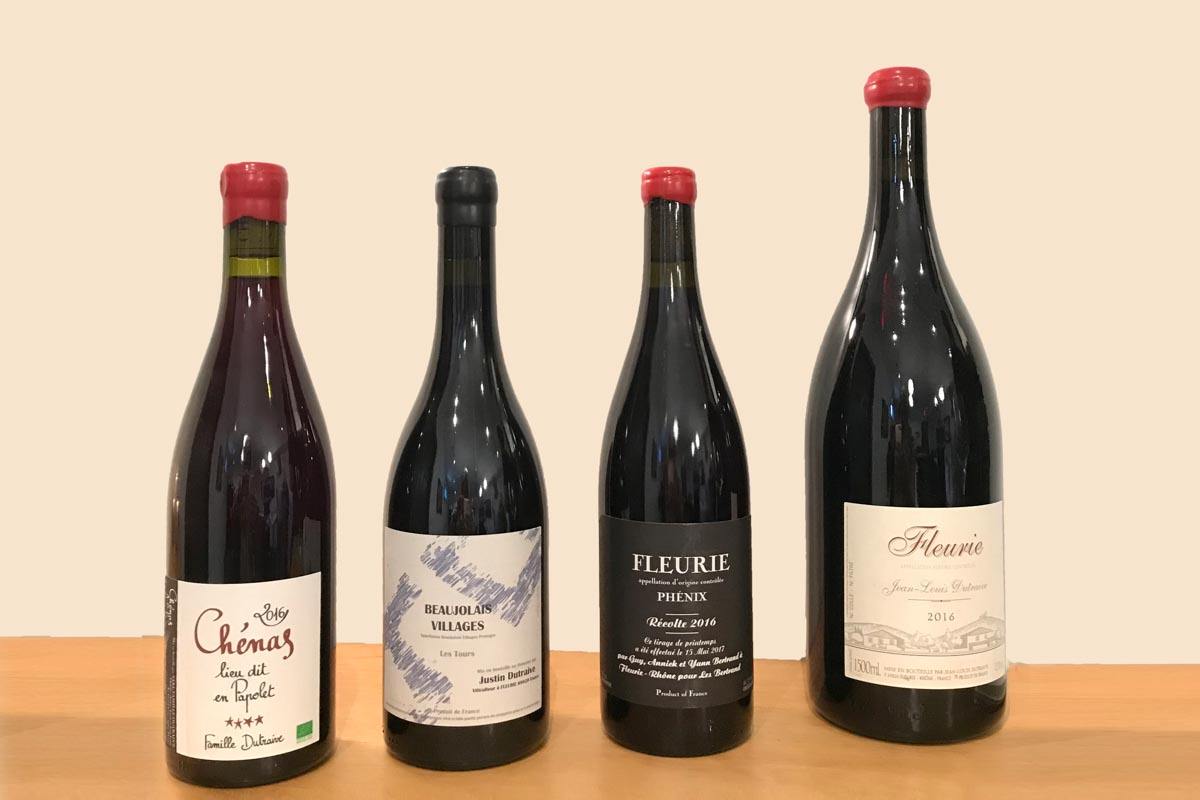 If you happen to be having a wine “expert” over for drinks and you want to impress? Serve a Gamay Beaujolais. But make sure to serve it at fifty degrees. She will think you are the 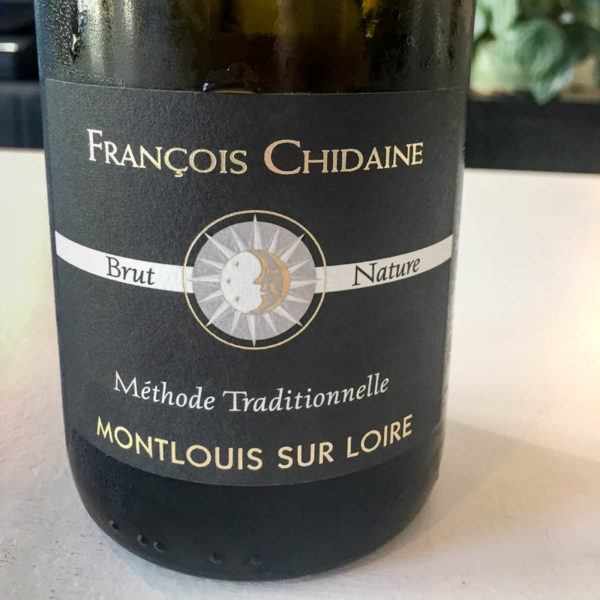 hippest winester in town.  If you choose a wine from Chénas or Fleurie, she will bow at your feet. Apparently, Gamay Beaujolais is the “hip” wine to be drinking right now. This tidbit and much more were some of the things I learned at yesterday’s Gamay Tasting at Monarch Wine Merchants. David McCarus from McCarus Beverage Co. presented four biodynamic wines made by cutting-edge winemakers in Beaujolais.

Note: What does biodynamic mean?

Dr. Vinny from the Wine Spectator says it best. “Biodynamic is similar to organic farming in that both take place without synthetic chemicals, but biodynamic farming incorporates ideas about a vineyard as an entire ecosystem, and also takes into account things such as astrological influences and lunar cycles. A biodynamic wine means that the grapes are farmed biodynamically and that the winemaker did not make the wine with any common manipulations such as yeast additions or acidity adjustments, etc., ….”

When we walked in the door to Monarch, we were greeted by Justin, the proprietor. We were handed a glass of wine to get our palate “tuned up.” He was pouring François Chidaine Montlouis Sur Loire Sparkling Wine.  This wine is made from 100% Chenin Blanc grapes and was just the refreshment needed as we rushed in the door. You see it was just a few minutes before 6:00 pm, the start time for the tasting and traffic issues slowed me down. I so wanted to be early to give my friend Jennings who joined me on this adventure a chance to look around the store before it started.

Alas, we were the first to arrive! Not Late!! Whew….. relax and enjoy this delicious bubbly wine. Within minutes, the other fourteen tasters arrived, got their glass of tiny bubbles and we were moved to the tasting room. Yes, this store has a designated space for wine tastings. Very classy and perfect for learning. This tasting was more of a class as much as a tasting, so the room max’s out at 16 tasters. We each have a seat with a tasting guide, several wine glasses, a glass of water and a spitting cup.

By the way, this sparkling Chenin Blanc is so delicious and so affordable, I had Justin pull a bottle for me to start my order for the evening. 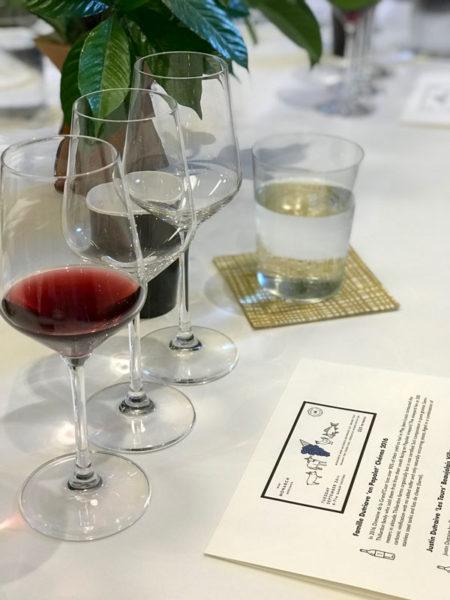 Gamay Beaujolais from the Feet of the Makers

As we sat, the first wine was waiting for us, but the others remained in the refrigerator so they could be served at 50 degrees. David began by speaking about the Beaujolais region in general. It’s location in France and proximity to Burgundy and how different Beaujolais is from Burgundy even though they share a border. Additionally emphasizing the pride that exists in Beaujolais that they are NOT Burgundy and can stand on their own merits. While Burgundy is well known for its Chardonnay and Pinot Noir wines, Beaujolais is known for Gamay. A few producers have been releasing Beaujolais Blanc made from Chardonnay, but it is hardly known outside of the region.

Beaujolais as a name caught the eye of the masses in the US when the release of Beaujolais Nouveau caught on here in the 1990s.  While a harvest celebration in France it was a marketing event here and did not serve the region well as many Americans believed that Beaujolais was synonymous with the Nouveau promotion.  Mass producers like Georg DuBeof made a killing, but it was not necessarily considered a plus for every producer in the region. Fortunately, winemakers like the Dutraive and Bertrand families have continued to make exceptional wines from the region and have been instrumental in the revival of great Gamay Beaujolais wines.

Before we got into our first wine, David said, “Gamay is the red wine you serve when everyone says they want a white wine. Gamay Beaujolais is so versatile that it goes with anything from vegetables or fish as well as more classic red wine meals like beef or venison.”

The Farmers of Fleurie

Many farmers in Fleurie, one of the ten Beaujolais crus have had a couple of tough years in a row. Including the Dutraive family who lost 90% of their crop in 2016 and again this year in 2017 due to hail storms that ripped through their fields. The thin skin of the Gamay grape cannot withstand the battering from hail, forcing these and other farmers to reach out to friends to purchase grapes in order to make wine and thus make a living. So while all of the winemakers whose wines we tasted are from Fleurie, the grapes from two of the wines are from other crus.

Probably the most important piece of information that we got before we started is that all of the wines we are tasting have been cultivated and vinified using the exact same methods. Any difference in taste is a result of the terrior and not a result of any additives or enhancements to the process. This is a pinnacle of biodynamic winemaking. 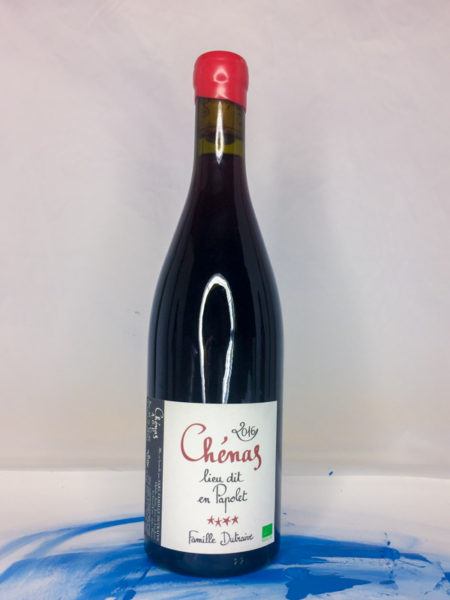 This name and wine label should look familiar to my readers.  When I saw this wine label, I too was confused because it looked so familiar.  As it turns out, this is the second wine I have tasted by the Dutraive Family. The other was Famille Dutraive Chénas lieu-dit Les Perelles 2016 that I purchased at goat.sheep.cow back in August.

The grapes for this wine were purchased from the Thillardon family in Chénas from the’en Papolet’ vineyard. This vineyard lies at roughly 980 feet in elevation and is south facing providing sun all day long. The soil is pure granite.

This wine as were all of the wines we tasted was stomped by human feet. No machines used here. Some of the grapes were purposely left intact during fermentation. This process is called semi-carbonic vinification where the crushed grapes first ferment allowing the yeast slowly infiltrate the intact fruit creating more concentrated flavors to permeate the wine. Additionally, there was no additional sulfur added and only naturally occurring yeast. The wine was aged in both stainless steel and oak barrels.

Not surprising to me, this was my favorite wine of the night. The nose for me was of dark, ripe Bing cherries. The wine is beautifully balanced with juicy, intense fruit. Each sip felt like a mouthful. My oh my, this is my style of wine. I did not want this first taste to end.  But it did. Note to self: this one is a five-star wine. Available at Monarch for $39.99 a bottle. 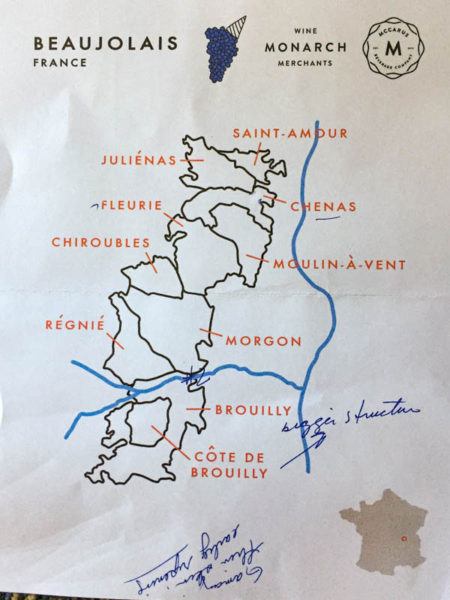 But first – For a wine to be called Beaujolais-Village it must come from designated higher quality sub-zones within Beaujolais and can be blended with other “Village level” sources.

Justin is the eldest son of Jean-Louis Dutraive. He is in his early twenties and grew up “in the business.” Wine runs through this families veins so making a wine at such a young age is just what one expect. This wine is sourced from a hillside parcel of the ‘Les Tours’ near the Crus of Brouilly and Côte de Brouilly. This wine was farmed, vinified and aged in accordance with the cycles of the moon.

I had a harder time with this wine pulling out flavors. The nose was a bit dusty. There was rich dried red fruit on the palate with a tart finish. This wine is absolutely enjoyable and standing alone a great wine. But after I went to heaven and back with the first wine this one left me wanting more. I know that I should be able to take a more studious response but I can’t, I am merely mortal. This wine is available at Monarch for $32.99

David started this wine by stating that Yann had great hair! I was curious, so I went looking to see what “great hair” meant. My friends at Paris Wine Company have permitted me to share this image with you. 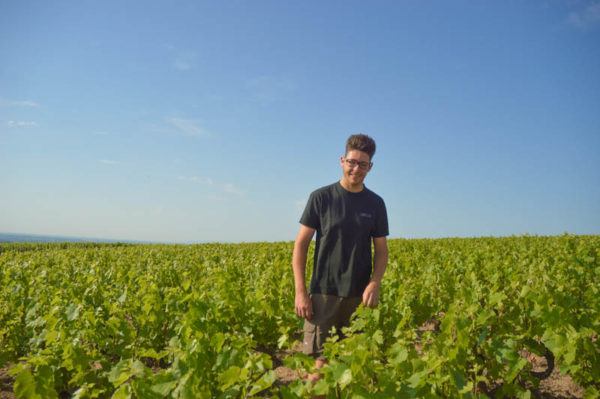 David is right; he has great hair!  And as you can see Yann is also a young man in his twenties, and also from an iconic winemaking family. This was his fourth year making wine on his own.

This is the first of the two Fleurie wines we tasted. Phénix is comprised of fruit from two different terroirs on vines 30 and 50 years old. This wine is also right up my alley. Ripe plum on the nose followed by more plum and spices on the palate. Cinnamon and black pepper stand out but are not overpowering. I found this wine to be well balanced and will definitely end up in my cart tonight.

This wine is available at Monarch for $32.99 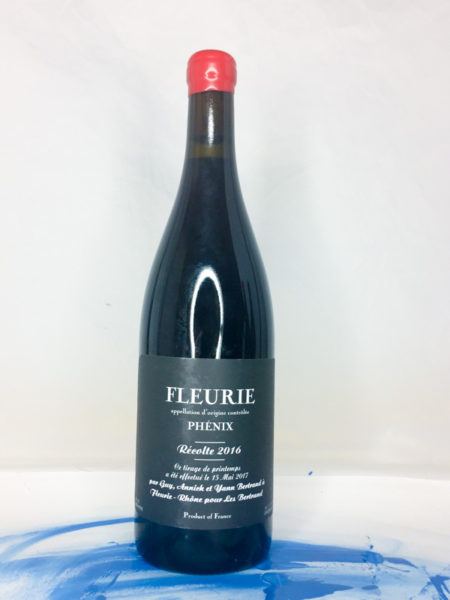 The last wine of the night was probably one of the most interesting wine experiences I have ever had, and I think I can say the same for Jennings. I saw her stick her nose in her glass to catch the nose of the wine. She pulled the glass away and asked me what I thought. So I went next. All I could say was mud, wet dirt, earthy, boggy mud. David described it as “animalistic” which makes sense but also confounds. Strictly on the nose, I would under other circumstances walk away from it. But I was here to taste and learn.

The wine was delicious! None of the olfactory responses match what was in my mouth. I liked it but was so stunned I could not refocus myself to dig more into its flavors. Well, I have to end it there, but I might just go back and get a bottle. I feel like I need to walk with this wine and see what more I can get from it. 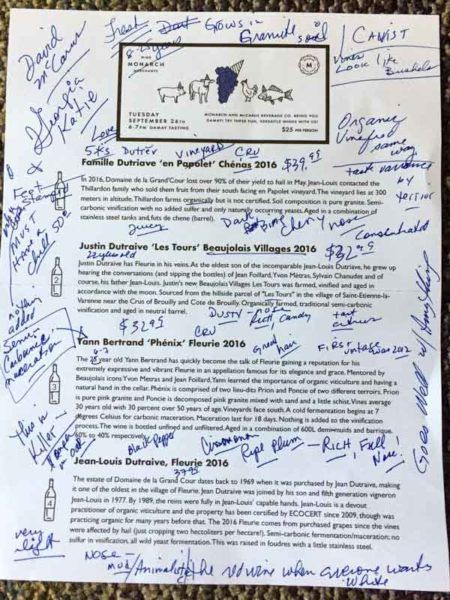 If you have not yet shopped at Monarch Wine Merchants… go today. It is an amazing store. Located at 1107 King St., Suite B, Charleston, SC. Hours: Monday – Saturday 11am-8pm, Sunday 12pm-5pm

Full disclosure: The Gamay Beaujolais tasting tickets were $25.00, and I paid just like everyone else. I received no compensation for writing this post.

And I must give a shout out to Jennings. She nabbed a couple of these images that truly helped illustrate this post. Thank you so much!

Well, that all for now!

The Wine Foundry Makes Wine… … And So Can You

I learned several things upon drinking this bottle

One of my favorite family summer BBQ foods is Devi

No, I am not drinking out of the bottle! I am “t

I love being the stand-in for @mltavana and enjoy

Last night we had a few friends over for happy hou

Yesterday, I got the wax off the bottle of Castell

Bad days happen. They just do. So pick yourself u

One of the joys of this wine excursion was to meet

Rarely, do you meet people for the first time and