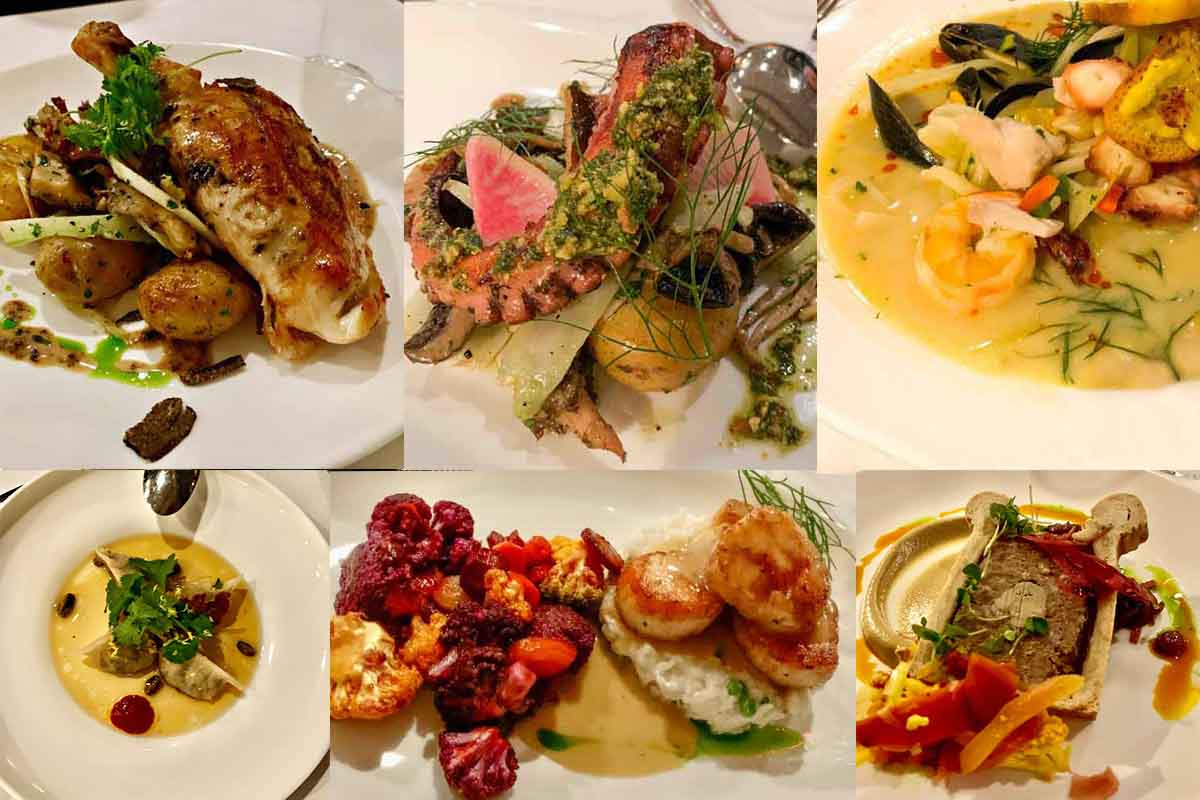 Bistronomy by Nico – Born from Pandemic

Charleston has a new french bistro and it’s a great new addition to our food scene. I have been twice and can not wait to go back. It’s called Bistronomy by Nico. There is a story behind it, so indulge me. After you read this make your reservation.

We all know that the pandemic has wreaked havoc on families and businesses across this country.  Hundreds of thousands have died, millions sick, and businesses everywhere have closed – many for good. Restaurants and bars have been hit especially hard due to the social and sharing nature of those businesses. With time regulations changed, adjustments were made so that restaurants and bars could operate. Albeit, at a reduced scale, so many still did not make it. Sadly included in the many closings were two wonderful establishments. We lost Josephine‘s wine bar on Spring Street, and we lost The Establishment restaurant on Broad Street. Both enjoyed great reviews with loyal followings, but it was not enough. Fortunately, something good was born out of these closings, and it’s called Bistronomy by Nico. 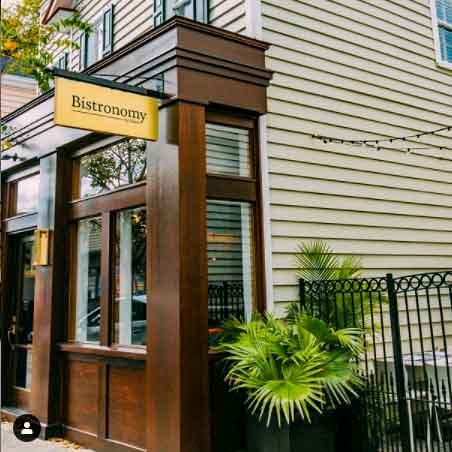 From Josephine’s Wine Bar to Bistronomy by Nico

Two friends, both French ex-pats, are talking. One is a French Master Chef and owner of Nico Oysters and Seafood, Nico Romo, and the other is an owner of the wine bar and café, Bistro a Vin, Dominique Chantepie. Now I may get the specifics of the story mixed up, but it goes something like this… Nico and Dominique, we’re chatting one day when I believe Nico said to Dominique, ‘you should open up a second wine bar in the space that used to be Josephine’s.’

Dominique said something like – No. And then countered with ‘you should open up another restaurant and bring your cooking back to downtown Charleston.’ (Nico’s other restaurant is in Mount Pleasant). But now, Nico dismisses this idea. As they sat talking (probably over a glass of wine), they both realized that they might be onto something. What if they did it together? And they did. Bistronomy by Nico was born, and four weeks after they signed on the dotted line, the restaurant was open and ready for business.

From The Establishment to Bistronomy by Nico

Unemployment in the restaurant business right now is at an all-time high. The staff from The Establishment was part of that statistic. That is until the Bistronomy by Nico team needed to staff the front of the house ASAP.  First, they hired Andreas A. Contreras, the former Sommelier from The Establishment, as their general manager. Then he brought over the best of the best servers from The Establishment so that on day one, they could hit the ground running with well-trained, experienced staff that had already worked as a team. 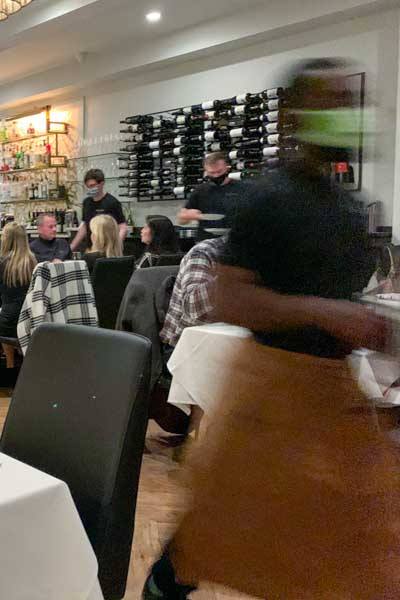 Opening During a Pandemic?

So how does a brand new restaurant that opened in the midst of a pandemic survive? Honestly, I don’t think many could pull this off. But this team did.  This is a bistro, and as such, one would expect the tables to be packed into the room. Not so, at least right now. The tables, both indoors and out, are well spaced so that the patrons sit as close to six feet apart as possible. But before you even get to your table, you better have a mask on your face. And as soon as you walk in the door, there is a hand sanitizer dispenser, and they ask that your “wash” your hands. (At Nico’s flagship restaurant, he installed a sink with running water on the patio for sanitizing purposes. And you better use it too.)

Mask Up and Keep your Distance

Of course, the staff is masked. Should you need to go to the restroom, your mask must be worn. Additionally, there is a bottle of labeled hand sanitizer on each table to be used as needed. Additionally, the bar seats are reserved just like all the other seats in the room. Reservations are well-timed to avoid folks clustered together waiting for a table. Thus there is no one “hanging about” the bar. 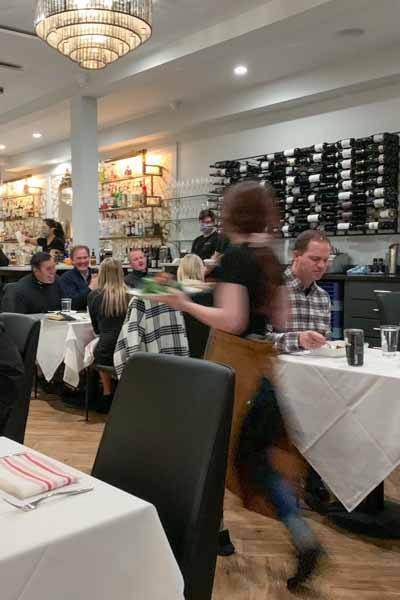 I have now been to Bistronomy by Nico twice in the last month with a few friends in my pod. I plan to visit again soon because I want to try every single item on the menu. Check out the menu where they read delicious and enticing. They also look delicious as they come out of the kitchen. And yes, so far, they all taste delicious. Check out what we have ordered.

They have the wine list broken into five separate categories: Sparkling, White, Rosé, Light Reds (which they refer to as Vins de Soif*), and Red. I love this list because each category has as few as two up to as many as eight different selections, and all but one in each category is available by the glass.

Gary and I both love this wine, which ticks 99% of the boxes I love in an Albariño. For me, the only thing missing is the hint of salinity that is typical from an Albariño from the Rías Baixas region along the western coast of Spain above Portugal. But I will order this wine every time; I like it that much. 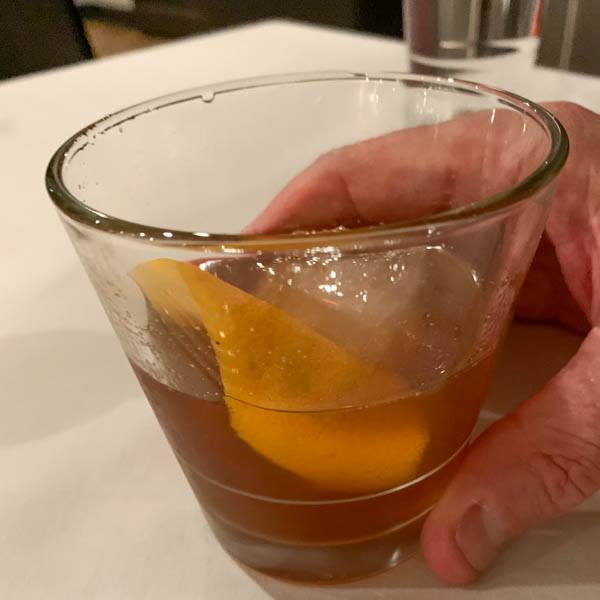 This, my friends, is a Brown Butter-Washed Old Fashion, which seems to be a favorite cocktail of my pod.

This Vermentinu delivered, and we probably would have continued to order it, but Gary discovered the Albariño, and well, that was it. Light-ish body but with great texture and a pleasing acidity. 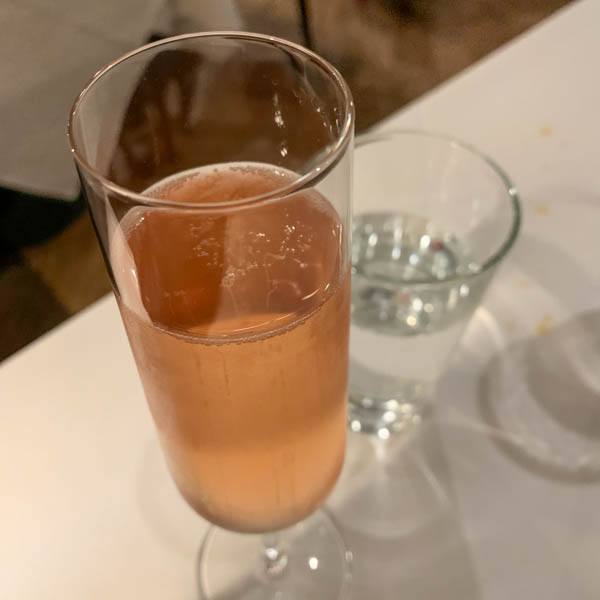 While the pod drank Old Fashions, I enjoyed a glass of the Sparkling Rosé of Cabernet Franc from Bouvet in the Loire Valley of France.  Gosh, this was a throwback because I used to order Bouvet all the time when I was much younger and living in Chicago. As you can see from the restaurant price, it is very much an affordable sip. 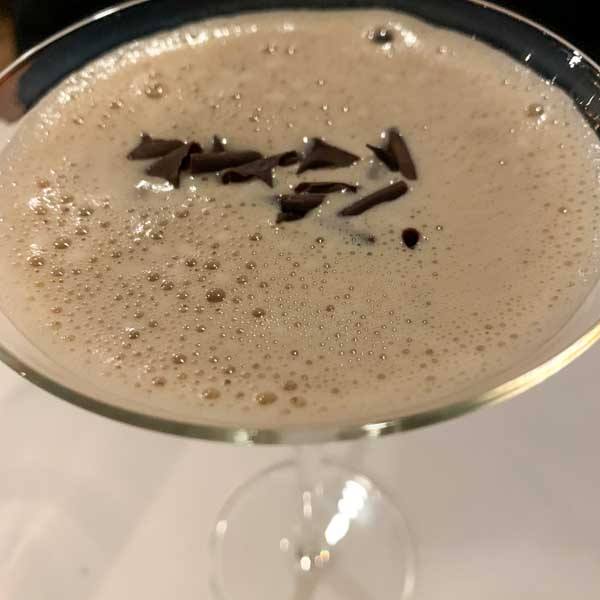 A Chocolate Martini seems to be the dessert of choice. They also serve an Espresso Martini that is also a popular treat. These sell for $14.00

*Vins de soif essentially means unpretentious wines measured not by their complexity, length, or ageability but by the joy and refreshment they provide.

Small Plates at Bistronomy by Nico

I could wax on about each and every item that I am showing you. As I said, I have yet to have anything from this menu that I did not enjoy. I am, for the most part going to let the pictures tell the story.

These are super delish. Don’t let the “escargot” scare you. They are mild and tender. Yum!! 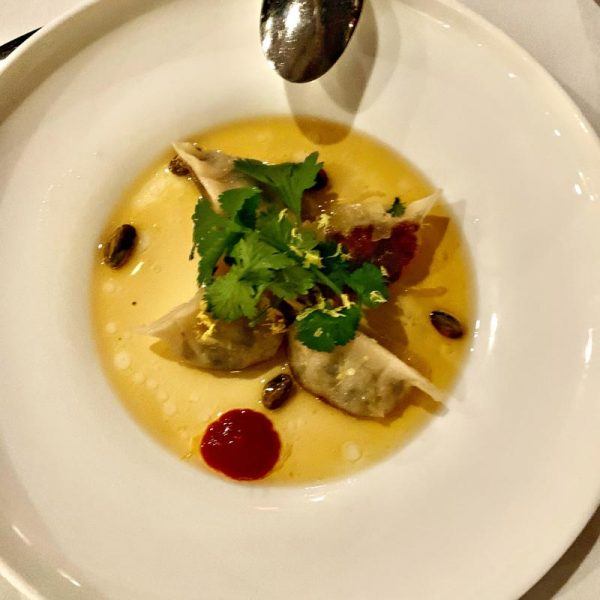 You must love goat cheese, but if you do, LOOK OUT – these are fantastic. 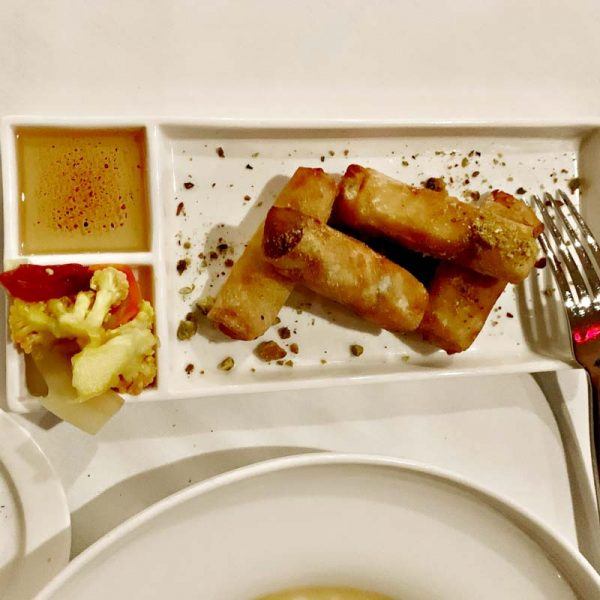 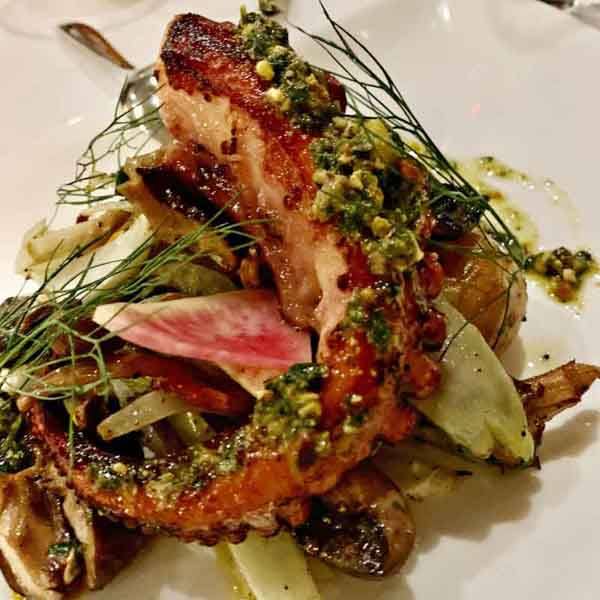 The only thing that would have made this better is to serve it at room temperature or just a slight chill versus straight from the fridge. 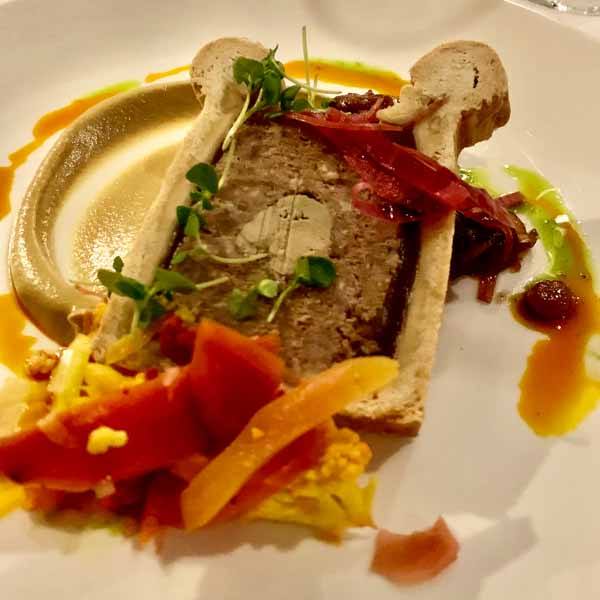 I can not comment other than to say that the person who ordered this ate it all. 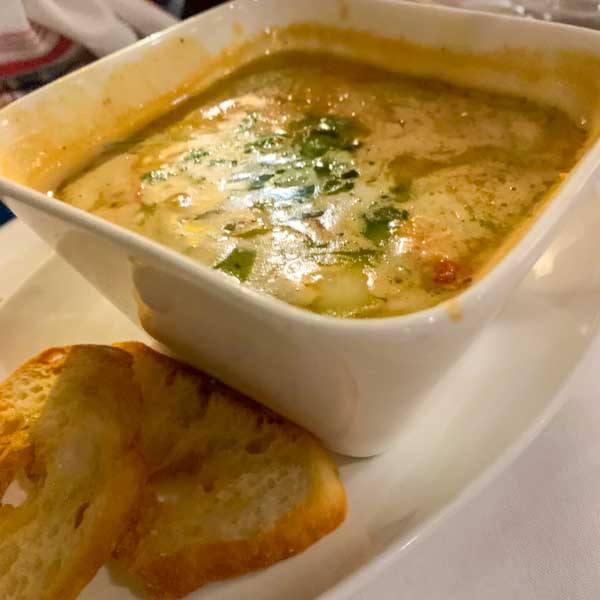 Large Plates at Bistronomy by Nico 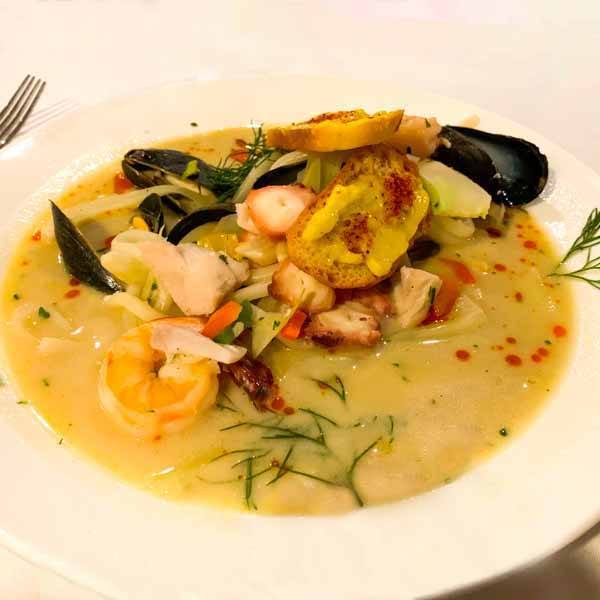 Once I get through the entire menu, I promise you that this will be my “go-to” meal. The broth is heavenly and ties this soup together with a bow.

This was so good the first time that Steven (pod member) ordered it again on our second visit. I wonder if he will order it again next month. 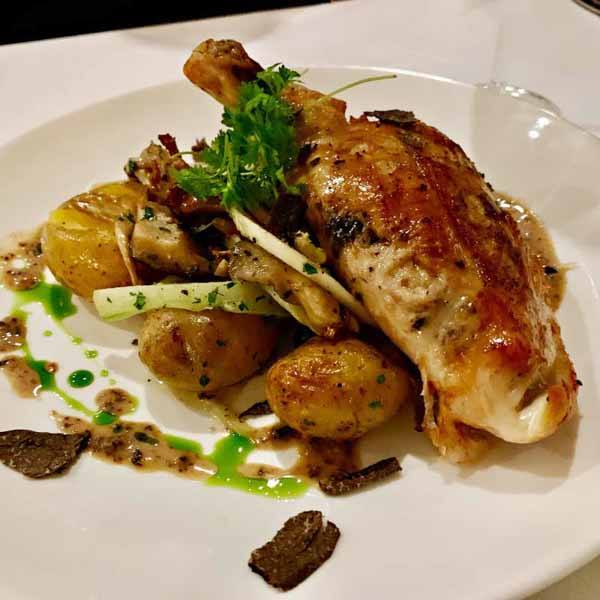 Much like Steven above, Gary ordered this same dish two times in a row. Oh, how he loves scallops. 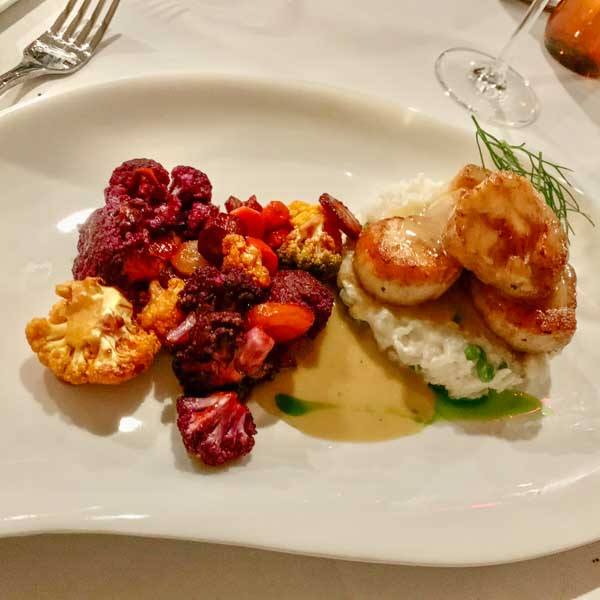 OK, fine. I was hungry. I also forgot to get a picture of my burger. Just know that I will order it again, as well. (Along with a side of regular ketchup and mustard)

When the pandemic rules subside, this place will be hard to get a reservation unless you book out weeks in advance. You can just tell. You can feel it in the air. So I suggest you get in now, while you still can.

My table – On our first visit, we were seated at a five top in the far back of the restaurant, next to the kitchen door and adjacent to the hall with the bathrooms. In most cases, one might argue that this is the worst table in the house. I would argue the exact opposite. First, it is very quiet back there so one can converse with your guests easily. If your back is to the wall, you can watch as every dish comes out of the kitchen. This is always fun when you are wondering what to order. But look quick, these folks hustle.

If you are lucky enough to sit at the head of the table, it is as if you are the “godfather,” watching the comings and goings of staff and guests alike, as if you are the conductor of this show. There is one last reason to sit here, but I shan’t spill the beans. Only if you have a wicked sense of humor will you understand. Sit there and see if you can figure out what makes us laugh and ensures that we ask for that table for every visit. Just know that you better not steal my table. It is the best seat in the house.

This spot is definitely going on My Charleton Eats.