This is a post that I should call This, That and The Other because it is different topics that are unrelated to each other but are all themes of my blog, eating out – this week at Barsa; creating food- a simple Unrecipe appetizer; and drinking and sharing wine – New Summer Sips. Hopefully, that means that there is something in this post for everyone. But before I go there, I have to tell you that last week was insane as I pulled off a hugely successful invitation-only tasting with Gratus Vineyards. Typically, I would not host a tasting when it is so hot out because shipping wine in 90-degree weather can cost a fortune, but we worked all that out, and I am so glad we did. It was a phenomenal evening that I will write about in a later post. Now let’s get started with Barsa Unrecipe Summer Sips.

In the meantime, if you would like to be notified when the next invite goes out in the Fall, you can request an invitation below.

Spanish Tapas with Passion: That is Barsa!

Barsa has been a Charleston staple for the last eight years. This Upper King restaurant was one of the first restaurants in that area that is now dotted eateries. They have lasted because they have held to their passion to serve authentic, traditional Spanish tapas fare.  I have been a patron of Barsa since the beginning and have watched and tasted as they fine-tuned their Spanish cooking techniques and recipes. It had always served “good food,” but as you know in Charleston that is not good enough at some point in the last couple of years though, they kicked into high gear and I now consider the tapas to be excellent.

Last time I was there the housemade Empanadas were filled with a curried lamb and were so good we reordered them twice. The filling changes daily so these may not be on the menu when you go, but if they are, order a dozen. They are that good. I am a big fan of the Grilled Octopus with romesco, green onion, new potato. As well as the Stuffed Peppers – piquillo peppers with Roncal cheese, and baby lettuces; Patatas Bravas – fried potatoes, roasted garlic aioli and salsa brava; and the Dates with manchego, jamón serrano, balsamic reduction. Of course, the Lamb meatballs are also a show stopper and generally are ordered in multiples. 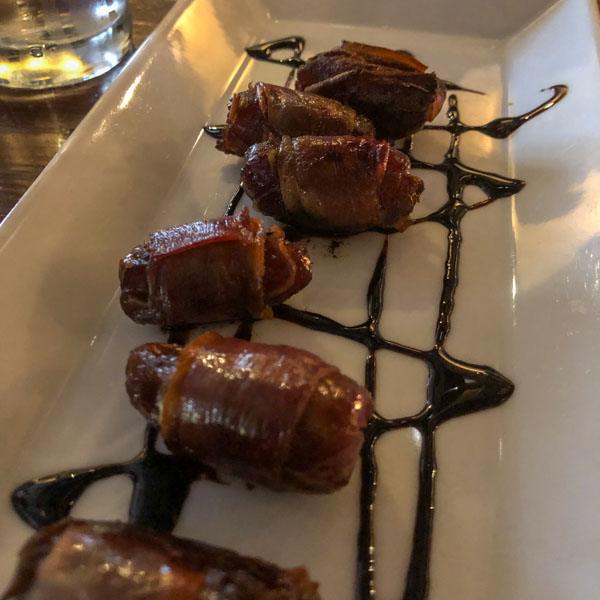 Where I wish the restaurant would kick it up a couple of notches is the wine list. The list is Spanish heavy versus just Spanish (which is what I would prefer) with additions from other countries that do not make sense to me. I have tried several different wines, and in general, I would say they focus on “easy drinking and affordable.” Perhaps it is the wine snob in me that wishes for a more curated list.

Impromptu happy hours are always fun, but you better be able to whip up some food fast, or the wine goes right to your head.  Recently, I needed to do just that, and the results turned out a real crowd pleaser. So, I looked in my freezer and saw this big package of cheese and spinach ravioli from Costco. Checked the fridge and I saw Parmesan Cheese. Looked in the pantry and saw rice flour bread crumbs. Perfect. That was all I needed. 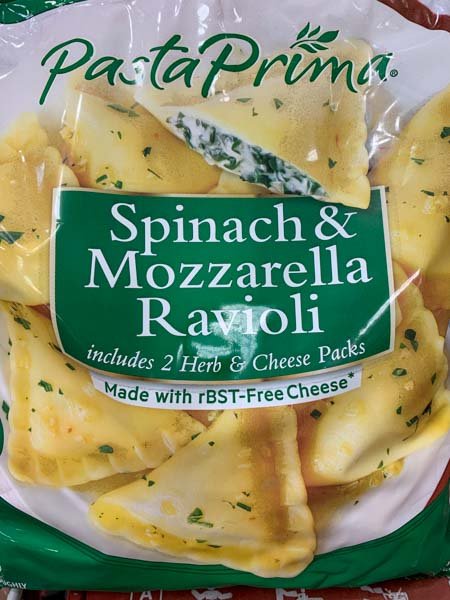 Get a raging boiling pot of water going on the stove. When it’s ready, toss in your desired amount of ravioli. But now however long the package says to cook them, cut that time in half. So if it says 12 minutes… only cook for 6 minutes. Drain off the water and place the half cooked ravioli in a bowl and coat generously with good olive oil.  Once all the pasta is coated with oil, you are going to coat with grated Parmesan cheese, dried oregano, and gluten-free (rice flour) breadcrumbs.

I use gluten-free bread crumbs because the rice flour makes for a crispy crunch. I always keep some on hand for when I want something extra crunchy. The amount of cheese and crumbs will depend on how many raviolis you are making, but the ratio is two parts cheese to one part breadcrumbs along with a good sprinkling of oregano.

Toss to coat in the cheese mixture and place the individual ravioli on a baking sheet. Do not crowd, so they crisp up nicely. 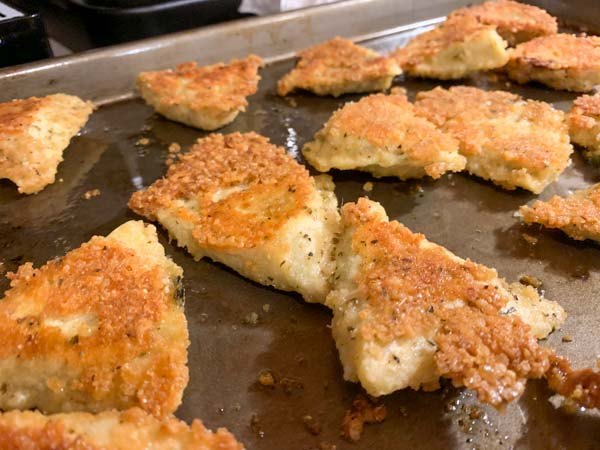 Bake for about 8-10 minutes until a crispy golden brown on the bottom, flip each ravioli over and bake for another 5 minutes or so until both sides are golden.

That is it. Serve warm as an appetizer. If you want a dipping sauce, you can always heat some marinara or other pasta sauce. 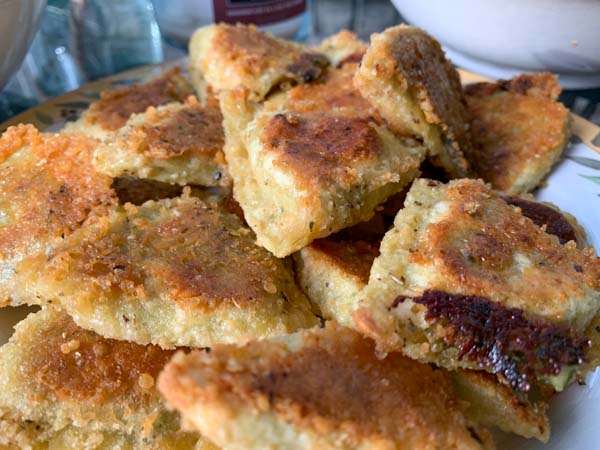 For Other Unrecipes You can check out: Goat Cheese Spread with Two Ingredients or Two in your Pocket 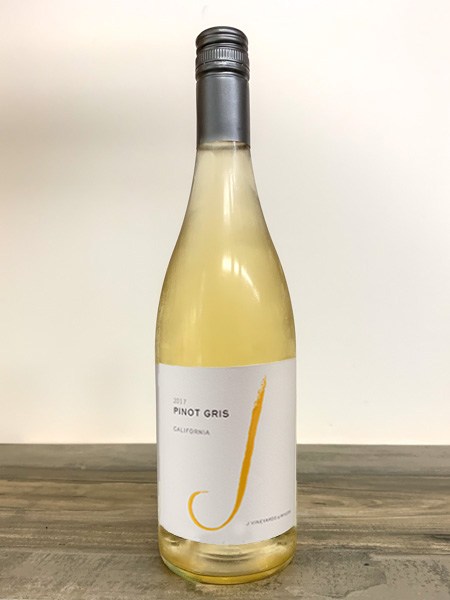 I can not remember where I first picked up this bottle because I have seen it just about everywhere. I was intrigued because it is a light gold color which for a pinot grigio seems odd. Most Pinot Grigio, I have seen and tasted is a super pale, almost clear yellow with a greenish hue. It was tough to walk away. So, at $12.99 a bottle, I had to throw one in my cart.

This wine continued to surprise me with its delicious apple and pear flavors and its creamy, textured mouthfeel. Yes, you heard that right, a creamy mouthfeel. I was so baffled that I went to the winery website to look at the technical information — no malolactic fermentation, no oak barrels, planks or chips either. Hmmm, nothing listed on the tech sheet would explain the texture. There are a couple more ideas, but I had to reach out to the winemaker to find out.

So I asked if they did any lees stirring? (The dead yeast from the fermentation is stirred periodically throughout aging to impart flavor and texture.). To which Assistant Winemaker Victoria said, “We do not lees stir the California Pinot Grigio. The weight, complexity, and fullness come from fruit sourced from the Russian River.  Approximately 19% of the blend.”  Hmmm, that begs a second question. Did they blend a different varietal into this wine?

And the answer to that question, I never got.

You see, different states and countries have different laws about labeling wine. In California, a wine must include a minimum of 75% of a single varietal to be called that varietal. Since I did not get an answer to that question, I may never know but it certainly is a possibility. In the end, I guess I do not care – (but the nerd in me wants to know!) I like this wine. It is an excellent price, and it can be found pretty much anywhere I go.

I have seen it locally at grocery stores, World Market, Costco, and Total Wine, which leads me to believe that it should be available all over the country. 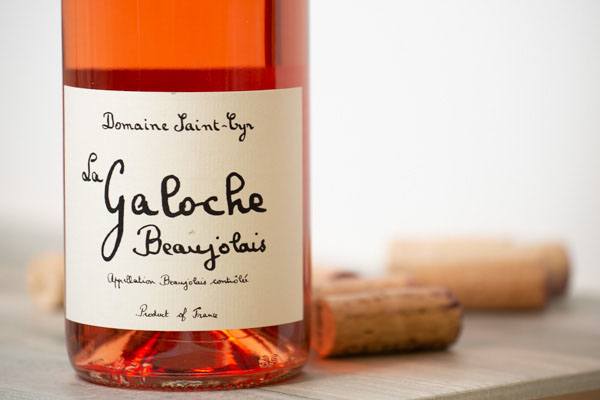 This wine has become a perennial favorite. Fortunately for me, it is being sold at retail this year versus only on restaurant wine lists. And better yet, it is at one of my favorite stores, EOX, selling for just $19.00 a bottle. With a mixed case discount of 15%, this is a steal at $16.15 per bottle.

The 2018 vintage is not quite so “in your face” as the 2017 vintage with the aromas and flavors of ripe, red strawberries. That said, while I liked that a lot last year, I am enjoying the restraint of the flavors in this years bottling.

Crisp, juicy, bright, and still luscious. I “j’adore” this wine and am happy to make it a part of my summer.