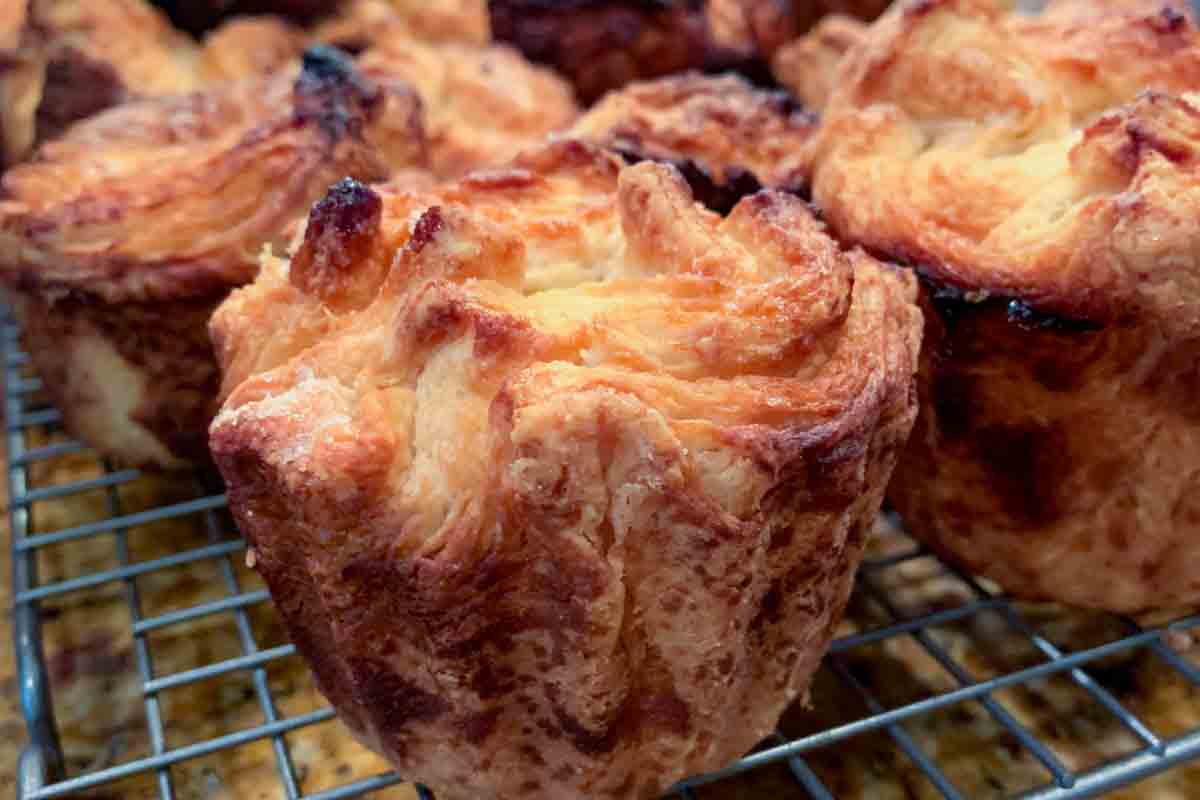 As I have said before, I am a huge, huge fan of the TV show The Great British Bake Off (Netflix changed the name to The Great British Baking Show for the US market). I am not sure why I love this show so much because I am a crappy baker. But the thrill is there, and I can’t wait for more seasons to show up on Netflix starting in August. My youngest sister is also a huge fan and last Christmas, unaware of the other, we each got the other a cookbook from the show. So when she suggested we have a baking day at her house one Saturday, I was all in. Good friend, Craig also wanted to participate so a few weeks back we all headed to her house for a day of baking.

It was a fun and floury day as the kitchen was “a bake” with activity.

We had a blast. Of course, I was teased because of the mess at my station but I was in a zone. I wanted. No, I needed to accomplish this.

So I decided for my baking day; I was going for it with a super challenging pastry, Kouign Amann. This is a butter layered pastry, like what one uses for croissants. What was I thinking! On top of that, since my dough was in (for 30 minutes) and out (for a roll and a fold) of the refrigerator several times, I decided to bake shortbread cookies as well. Again, what was I thinking? My sister made Gluten-free Cranberry Walnut Sweet Rolls. Craig made German Bread Rolls (Broetchen) that he used to make when he worked in the kitchen at a summer camp during college.

A post with so many recipes is too much. So, I decided it best to break this into two separate posts. Today is all about the Kouign Amann.

This recipe is Paul Hollywood’s. He is one of the two judges on the show. Since the recipe is from a British cookbook, you will need to get out your scale and measure your grams, milliliters, and centimeters. (Note: I followed the recipe exactly (other than doubling the amounts). For this reason, I will not list it under my recipes banner. If you want to download a copy, please, select here.

This recipe makes 12 buns. I doubled the recipe.

This completes one turn. 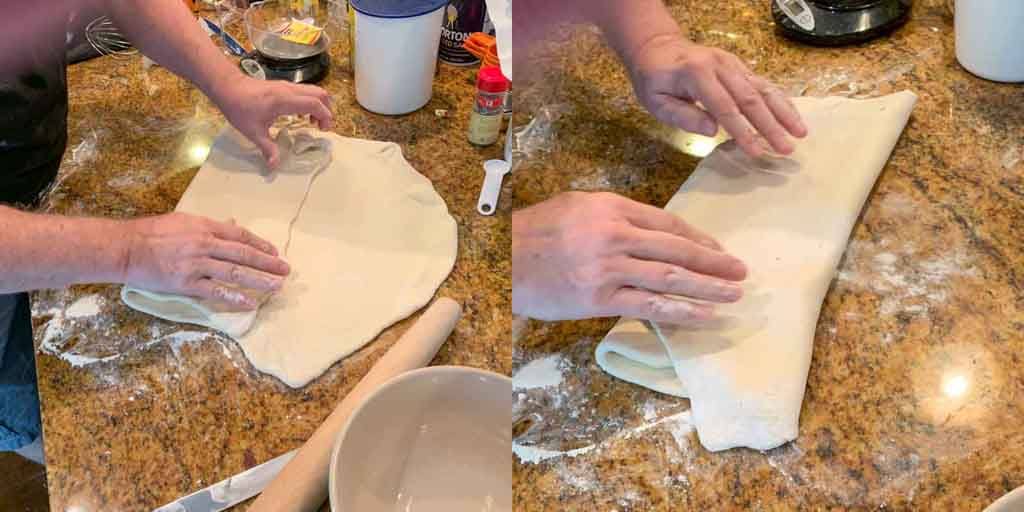 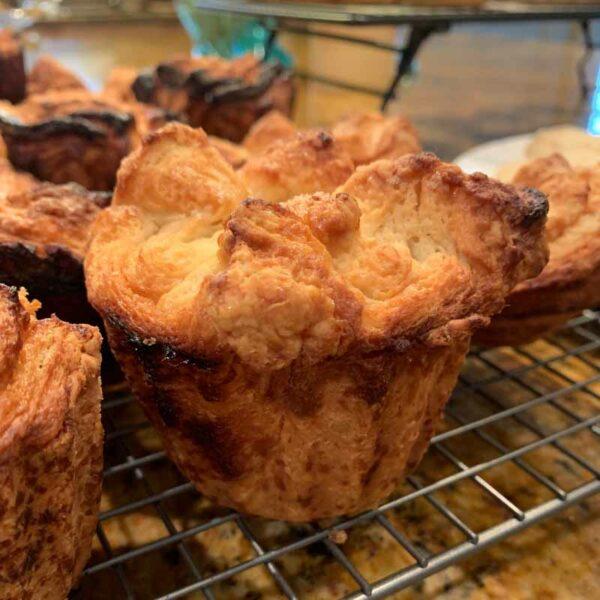 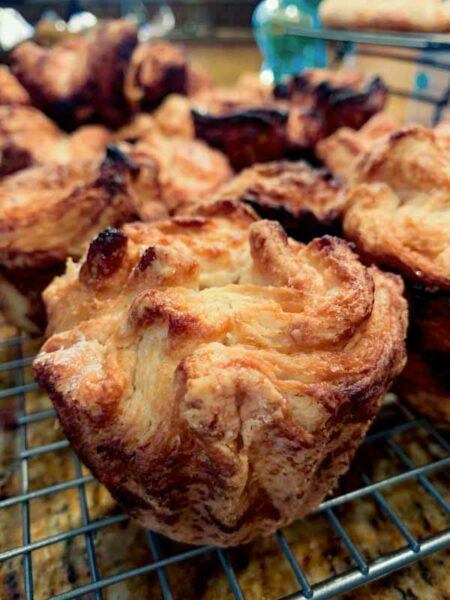 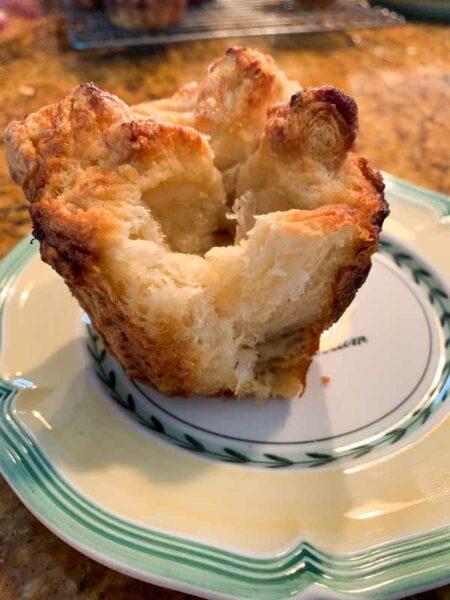 If I were on the show I would have certainly been eliminated. My pastries were all different sizes, the sugar burned on a few and I was a hot mess. But I had a blast and I would do it all again in a heartbeat. Funny I said that as my sister and I are baking again this Saturday…. hmm, what to bake, what to bake? 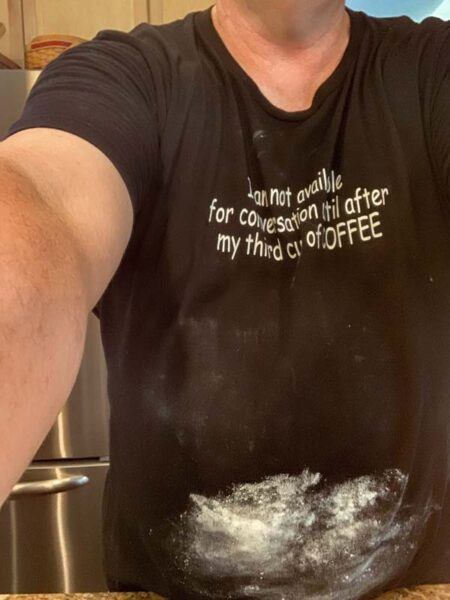 My sister felt it was important to show that I am a messy baker, cook, anything – I make a mess. There was flour on the floor around my station as well as on me. What can I say, I am creative not bound by being all neat and tidy. *This shirt available on AMAZON. (without the flour, of course)